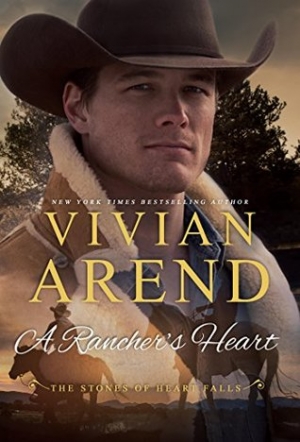 I admit I’m a sucker for a single dad story. There is something (possibly something I ought not be proud of because patriarchy) that gets me all melty when there’s an engaged, adoring, single dad as romance hero. The nanny/boss trope can be problematic of course. Not that I have read every book which employs the trope but many I’ve read or seen have a younger heroine and the power dynamic between a boss/employee, particularly one who lives in can be difficult to navigate well. I expect readers (including this one) may be even more sensitive to it than ever with #MeToo movement on the rise.

So I was especially appreciative with how you handled the trope. First off, Tamara Coleman is not girl. She’s a woman in her mid-30s who has experience in a difficult and challenging career (nursing) and who knows who to handle herself. Even though Caleb Stone is Tamara’s employer, she’s not beholden to him in the same way another employee may have been. She has family not too far away and a place to go if it doesn’t work out. While she wants a job and doesn’t want to jeopardise her employment at the Silver Stone Ranch, she also is no pushover. She pushes back just fine when it’s warranted (and sometimes even when it isn’t!). Added to that, Caleb is respectful of her. He doesn’t use his power as her employer to force her into anything. Except for one scene (which I’ll get back to later) I thought the way the dynamic was handled between the pair was very well done.

The focus for both Caleb and Tamara was, in fact, the children. Caleb’s daughters, Sasha and Emma (aged nine and seven respectively) are their number one priority. The girls have emotional scars from their mother abandoning them and they’ve also recently coped with their beloved Auntie Dare moving away and Auntie Ginny leaving as well to travel the world. As Tamara starts to bond with the girls, both the adults realise that if they go ahead and give in to the chemistry which is clearly present between them and it goes sour, the ones who will really be hurt will be the girls. I liked that take on the trope very much.

What that meant was that the heat level of the book was perhaps a little lower than the Six Pack Ranch books – only because Caleb and Tamara wait. And wait. The sexytimes don’t happen until late in the book and, because they are there to tell the story and not unnecessary, there aren’t a lot of them on the page. That’s not a complaint. The sexual tension building between them worked and their reasons for waiting were adult and intelligent – something I like my heroes and heroines to be. They only get intimate after they have independently realised there is far more than chemistry between them.

The one jarring note is a scene past halfway into the story, where Caleb goes into Tamara’s bedroom uninvited. It is clear that Tamara is not at all threatened and Caleb doesn’t force himself on her or anything. In fact, Tamara decides to call his bluff and push things even further than Caleb intended  because that’s the kind of woman she is. But it didn’t fit with Caleb’s character for me. He had previously been respectful and thoughtful about his action and this impulsive lack of restraint didn’t feel particularly sexy to me. And even Tamara’s participation didn’t quite settle my discomfort. I think I’d have liked it better if Tamara told Caleb to get the hell out of her room – and that’s what it felt like it would be more organic for her to do. In the end, I thought the interaction was  manufactured in order to get the characters closer to admitting what was between them rather than being a natural fit for the story.  I want to make it clear to readers that there is no coercion or force or anything like that. Any fooling around Tamara and Caleb do is 100% consensual. What bothered me about the scene was more that it didn’t feel like a good fit for the people I’d come to know (both in this book and in the previous books of the Six Pack Ranch for Tamara, and in Caleb’s case, in Rocky Mountain Home).

I liked, very much, that Sasha and Emma aren’t portrayed as perfect angels. Tamara is firm but fair with them and loving as well and I loved that Caleb wasn’t blind to his children’s foibles and didn’t assume Tamara was the bad guy if she was dishing out some discipline. There’s a scene early in the novel where Caleb comes in and hears Sasha crying crocodile tears and he knows immediately what they are and doesn’t bat an eyelash over it. He lets Tamara work out her relationship with the girls, providing support and backup to her when appropriate. He assumes competence and good intent and that was awesome.

I did wonder that Tamara didn’t seem all that mournful over losing her career as a nurse. While she isn’t one to dwell, her life had taken a huge turn. Losing her nursing registration was a big deal and I thought it was under-represented in A Rancher’s Heart.

Caleb is a good guy who takes on everyone else’s problems and burdens and barely ever has time for himself. He’s shut himself off since his wife left him and he’s cautious in the extreme about opening up again. Tamara sees that and isn’t shy about provoking a reaction out of him once they embark upon a relationship. I loved what you did with the “misunderstanding” at the end. It was short-lived and went in a direction I didn’t see coming at all but it was completely Tamara and perfect.

The Stone family are big and loud, just like the Colemans and I enjoyed all of the various interactions between them, as well as the friendships Tamara developed with Kelli, Tansy and Rose.

Tamara and Caleb fit together well. Tamara falls in love with the girls too – and they with her. I liked where you took the nanny/boss trope. I really did.

Note to readers – I’m a subscriber to the author’s newsletter and a recent goodie included in it was Surprised at Bootstomp Point which is an epilogue to A Rancher’s Heart. I read it straight after finishing the book and it was a lovely addition to the HEA. I expect the author will make it available on her website by the end of February or thereabouts.