When it comes down to it, rats in the oven trumps Lesley’s desire to never set eyes on another Brennan family member. So Lesley, a pro at property redevelopment, scrambles to Dominic Brennan’s hardware store for supplies. Dominic knows poison — rat and otherwise — and he sees it in Lesley. The woman ruined his brother’s life. Now that she’s back in town, Dominic’s afraid she’ll drag up the past, the secrets, and the pain. They clash immediately, but mix in a teenage boy, a puppy, some white paint, and some loud music, and what starts as cold fury transforms into a nuclear attraction. This basic renovation becomes a major life refurbishment for them both.

Jane forwarded me your offer to read “A Basic Renovation.” As a woman who vividly remembers watching “The Partridge Family” and “Get Smart” – just aged myself, didn’t I? – the plot of two older people finding love grabbed my attention. Usually “older” means mid 30s, or 40 at the latest so it was a blast to actually have a couple in what I feel is the prime of life – ahem – who finally find The One. I also totally agree that they do tell us about middle aged spread but no one ever spills about the hairs in screwy places. 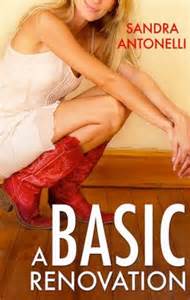 The start is “in your face” with the number of characters letting it verbally all hang out. Lesley and Dominic at first rip each other to shreds. Dominic’s bizarre, almost psychotic mother and Lesley’s GP. At least with GP we get a lesson in Italian curses 101. While Dominic’s mother – a woman who is seriously bat-shit crazy – could teach a class in Intro to Insults. Dominic and Lesley aren’t slouches when it comes to scream fests either which all sort of almost killed my early buzz for the book. One, or two, loud mouthed characters can add spice but it took me a while to get adjusted to the number of them here. But then I guess Dominic and Lesley are products of their environment so for them not to curse would seem strange and you’re not afraid to show your characters with some warts and blemishes. Still … readers with delicate sensibilities should just be aware of what they’re getting into.

The dialog of the book is also one of the strengths. Dominic and his son, Kyle, and best friend Fabian talk to each other like guys. A little bullshit, a little testosterone, a lot of ribbing and the honest truth when they tell Dominic that he needs to make up to Lesley for how he ultimately hurts her. I also enjoyed Dominic and Kyle’s relationship as Dominic continues to help guide his 16 year old almost-man towards who he will be as an adult.

Lesley is a strong woman who, even though peri-menopause will soon not be just a word to her anymore, can handle power tools and isn’t afraid of getting her hands dirty doing home renovations. She also shows, several times, that she’s one of the more mature people in this town yet she’s ready, willing and able to sling shit, tell someone off and stand up for what she deserves. She had Dominic sweating there at the end.

Dominic did deserve to sweat. His family had turned Lesley into a convenient scapegoat for years to cover all the screw ups perpetrated by her ex-husband – would he still be an ex if the marriage was annulled? I was confused about that too – who happens to be Dominic’s little brother. Glory days though, once Dominic starts to see the light about all this, he mans up and goes to Lesley’s house bearing gifts and an apology. More on the gifts later. Meanwhile, Lesley is savvy enough to accept the gifts and willing to let Dominic’s actions speak louder than his former words. And then they talk, really talk, and get a lot of things and issues out in the open and dealt with.

The book is also funny. In places it’s sidesplittingly funny such as when Lesley and Dominic get trapped in his truck by a bear trying to claw its way in while Dominic tries to keep its ass out.

‘The point is,’ he told himself, ‘this was all about survival of the fittest.’ Lesley’s jokes about his junk food diet aside, he was pretty fit for his age, and he’d be damned if some stinking, three-hundred pound tub of lard tried to prove otherwise. Man had evolved. Man made fire, invented the wheel and indoor plumbing, while bears, as they witnessed earlier, still shit in the woods. Yeah, as a man he was the superior beast solely on the merit of brain power and the flush toilet. ‘Screw you Yogi, this man has a PhD.’

As I said, I was delighted to find an older couple who think in terms that people my age would – relating home décor to the Brady Bunch and concerned about “sell by“ dates. Anyone worried that Lesley will be a dried up prune need only look to her cherry red Harley and red cowboy boots. Dominic, who sits his reading glasses on the end of his nose, will hopefully never get to the awful stage Andy Rooney mentioned – men in yellow pants trying to pick up younger women. Instead he appreciates that Lesley has some intelligence, is someone he can talk to and who “knows what she’s doing and how to do it.” The way these two eventually burn up the sheets, and scorch some counters and flooring, shows that age and experience count for something.

I was also tickled pink that Dominic is the one chasing Lesley. He’s the one pushing for a long term relationship over a brief “down and dirty sex on the floor” fling. He’s the one who wants to see her toothbrush and tampons in his bathroom. And when he feels the moment is right, the one to make a heartfelt proposal.

Tied to the end of the ribbon was a fair-sized ruby framed by twin diamonds that were set into a platinum band. She looked up into Dominic’s face. Hot aquamarine eyes gazed back.
‘I like you in red,’ he said, pulling the blue length free of the ring. It slid on her finger easily.
Dumbstruck, Lesley felt herself blink.
Long fingers skimmed into her hair and Dominic held her face between his hands. ‘You thought you could walk away? I love you. Don’t you know? If you leave me, I’ll come after you. I’ll go caveman on your ass. I’ll grab my club, track you down and drag you back here, by your hair if necessary. Don’t make me do that. Don’t make be a savage brute. Save me from that. Stay here. Stay here with me. Marry me.’

He not only loves Lesley, he respects her. While he enjoys sex as much as the next man, he finds and treasures the fact that he enjoys just being with her, holding her and snuggling in bed with her. And he wants the whole wedding shebang – white dress, tux, flowers and ghastly six layer cake.

Dominic is the master of the appropriate gift. He first comes to Lesley’s home renovation project bearing chocolate and rat traps, moves to a gorgeous sounding engagement ring to go along with his proposal and later, after he fucks up and knows he’s got to make his apology count, he shows Lesley that he knows her, has listened to her and always will with the perfect thing. I was as delighted with the contents of the white paper bag as Lesley was.

I hope your book is only the beginning of ones that feature characters in their middle age finding love. And not as the secondary or “aw, aren’t they cute?” tertiary back ups to the younger main couple. After all, fifty is the new forty. Or is it forty is the new thirty? B