More Than Just a Pretty Face by Syed M. Masood

Jayne’s review of this #ownvoices YA novel got me to pick it up and I was glad I did. 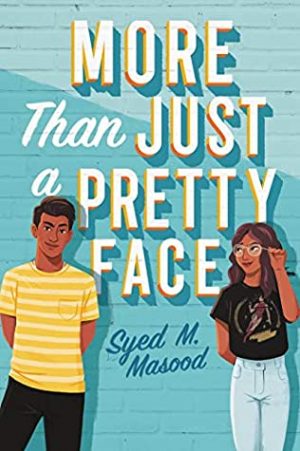 Danyal Jilani is a good-looking and sweet nineteen-year-old in his senior year of high school (he was held back a year in middle school). He may not be book smart but he’s a talented chef and he wants to go to culinary school.

His parents, devout Muslims who hail from Pakistan, are searching for a bride for Danyal. His mother keeps trying to fix him up but Danyal knows who he wants to marry: Kaval, a drop-dead gorgeous and brainy fellow student. Without better grades and admission to graduate school, though, Danyal will remain out of Kaval’s league. Even his own dad is disappointed in Danyal’s culinary school ambition.

Then Danyal meets Bisma, one of the girls his mom tries to set him up with. Bisma is an attractive microbiology student at Berkeley, so she too should be out of his league. But her parents are willing to marry her to almost any Pakistani-American young man who will have her, for one reason: Bisma not only gave away her virginity but that act was taped.

The sex tape was briefly online. Bisma’s parents had to move the family across the country to escape the scandal. If it comes out in their new community, no other member of it will want to associate with Bisma. When Bisma confesses this to Danyal, he recognizes that others including his own parents will see this as an indelible black mark. But it’s in his nature to be kind so he befriends Bisma anyhow.

Danyal gets picked to participate in a school contest. He’ll have to write a history paper and deliver it. The assigned topic is his history teacher’s hero, Winston Churchill. If he wins the contest, he may also be able to win over Kamal. Only Danyal learns that Churchill was responsible of the deaths of three million people in the Bengal famine. Danyal’s grandfather was just sixteen when he marched for independence from the British Raj. If Danyal gives a paper on Churchill’s role in the famine, it could cost him everything.

Can Danyal just disregard this part of Winston Churchill’s legacy? Will he notice how he feels about Bisma, who helps him with the assignment? Who will he choose between her and Kamal?

This was a cute book with a lovely coming-of-age journey and a sweet, kisses-only romance. Jayne gave it a rare A- and I can understand why. It is page-turning and funny, constructed very much like a rom-com, complete with two sidekicks who pull Danyal in two directions (Sohrab, Kamal’s devout brother, and Zar, who is closer to secular).

Danyal was a sweetheart but I wanted him to be less of a lightweight. That is part of his journey and of what the book is about, but it made it hard to take him seriously for a good part of the book. His immaturity made the book read like a youngish YA. Danyal was loveable, kind and heartwarming, but his casual and unthinking cluelessness made it hard to view him as grown up enough to marry.

I liked the characters. Almost all of them had a nice side (except for Bisma’s father; a scene where Danyal stands up to him is one of the best in the book). But they could have used more depth and given the way the book ends, I wanted just a bit more relationship development. And although Bisma had been rebellious and acted out in her backstory, it was hard to see that any hint of that in her personality.

The ending was on the abrupt side. I wanted it to stretch out for another page or two so I could wallow in the happy sigh. B-/B.

The Rational Faculty by Gregory Ashe

This book is the first in Ashe’s Hazard and Somerset: A Union of Swords gay mystery series, itself a sequel series—six books and a short story collection about this same couple come before it.

Partners (romantically, if no longer professionally) Emery Hazard and John-Henry Somerset have moved into their new house. Somers is on the police force; Hazard left it and he’s now rudderless. He’s also suffering from depression. Somers sees it and worries but doesn’t know how to bring it up. It’s bad enough that Hazard has no sex drive and has thoughts of suicide.

A new case shows up, the murder of a professor in the nearby Wroxall college. The stabbing occurred at a party on Halloween night, so the costumed killer could have gotten away without raising suspicion. Somers (saddled with a new, awkward police force partner) begins to investigate.

Later, while Somers sleeps, Hazard sneaks into the crime scene. It’s the first time he’s felt good in quite a while. When he finds what may be the murder weapon and calls it in, though, his former co-workers interrogate him for hours and then badmouth Somers for being a lesser cop. A student insists on hiring Hazard to investigate privately, and the cops’ unfeeling remarks escalate enough to affect Somers and Hazard’s relationship.

This book was much, much better than the previous Hazard and Somerset book, Criminal Past. The Rational Faculty has none of the gratuitous torture we were (mis-)treated to there. There’s some freaky violence late in this book but it’s just in one scene and neither Hazard nor Somers is hurt so I was happy on that front.

When it comes to the topic of depression, I am an #ownvoices reviewer. I thought that for the most part the portrayal of depression rang true. One scene was less than realistic (you can’t necessarily get through to a depressed person no matter what you say) but overall, it was well-handled.

I loved that Hazard and Somers communicated their feelings and resolved some of their issues. It is always romantic to see them do that. Because it doesn’t come easily or naturally them, their willingness to put their wounds and fears out there shows how much they mean to each other.

My least favorite aspect of the book was the way the university’s professors and one of its graduate students were portrayed. A black, queer professor proclaims that the murder victim was an illegitimate hire because unlike the person he replaced he was a white male. In real life, once a professor is hired, other university faculty are professional and collegial enough to keep their frustrations with hiring decisions private. It would probably cost them their jobs if they weren’t.

There is another character who is also an academic and a member of a marginalized group (I am trying to avoid spoilers). This character leads a protest against Bright Lights, a white supremacist group. This person is portrayed as radical and eager for a violent clash to erupt and their willingness for things to get far out of hand makes no sense.

The Hazard and Somerset books have a funhouse mirror aspect; the world the characters inhabit is distorted, full of exaggerated, jack-in-the-box villains. That effect might be lost if the author portrayed characters on only one side of the political spectrum as violent extremists. But even understanding that, I find these choices of portrayal problematic.

Nazis believe that POC, LGBTQ+, people with disabilities and religious minorities have no right to exist much less be treated equally. College faculty may lean in the opposite direction politically but few are out to harm anyone; their goal is to educate. So the both-sideism in these books is a false equivalency.

Enough dangerous misinformation and disinformation floats around in our society that I feel such a portrayal may reinforce extremists views, such as those held by the mob of insurrectionists who attacked the Capitol building. I understand that different rules apply to fiction than to reportage, but even so this aspect of the series troubles me. I can put up with because Hazard and Somerset themselves are center-left in their own political views, but the underlying message isn’t one that I agree with.

The other issue I had was the concept that Hazard and Somerset could work together on the same case despite their different professional positions. Somers is police and answerable to the police chief. Hazard is investigating privately for someone who hired him and doesn’t have the same rights, restrictions and resources. I loved the tensions that arose between Somers and Hazard as a result. The solution to this conflict worked well in this book, but as the basis for how they’ll coordinate investigations that will arise in future books it doesn’t jibe.

The murder mystery, though messy, works better than several others in the series and it sets up what will be a suspenseful arc. Hazard is threatened and stalked by a mysterious individual known only as the Keeper of the Bees. This is a strong element and it added a lot of tension.

I would be remiss if I didn’t mention that for once there were no slurs or child-in-jeopardy elements. That was good too.

This is my second favorite Hazard and Somerset book. B.

→ Janine
Previous article: REVIEW: Quiet in Her Bones by Nalini Singh
Next Post: REVIEW: My Monsterpiece by Amalia Hoffman