Review: The Maid by Nita Prose 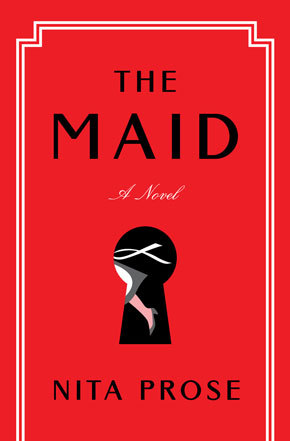 Molly Gray is not like everyone else. She struggles with social skills and misreads the intentions of others. Her gran used to interpret the world for her, codifying it into simple rules that Molly could live by.

Since Gran died a few months ago, twenty-five-year-old Molly has been navigating life’s complexities all by herself. No matter—she throws herself with gusto into her work as a hotel maid. Her unique character, along with her obsessive love of cleaning and proper etiquette, make her an ideal fit for the job. She delights in donning her crisp uniform each morning, stocking her cart with miniature soaps and bottles, and returning guest rooms at the Regency Grand Hotel to a state of perfection.

But Molly’s orderly life is upended the day she enters the suite of the infamous and wealthy Charles Black, only to find it in a state of disarray and Mr. Black himself dead in his bed. Before she knows what’s happening, Molly’s unusual demeanor has the police targeting her as their lead suspect. She quickly finds herself caught in a web of deception, one she has no idea how to untangle. Fortunately for Molly, friends she never knew she had unite with her in a search for clues to what really happened to Mr. Black—but will they be able to find the real killer before it’s too late?

A Clue-like, locked-room mystery and a heartwarming journey of the spirit, The Maid explores what it means to be the same as everyone else and yet entirely different—and reveals that all mysteries can be solved through connection to the human heart.

KIND OF A SPOILER ABOUT THE ENDING IN THE REVIEW, BEWARE

I found this book to be readable, but the ending also irritated me a great deal. I am very torn about it.

I went and checked some reviews after I finished reading – I was curious as to whether other people had the same problem as I did and apparently several reviewers were not sure if Molly’s character was well done. The author never specifies whether she is written as being on the autism spectrum, whether she has Asperger, or whether she just “struggles with social skills and misreads the intentions of others” as blurb correctly states.

I don’t know whether Molly was well written if she was meant to be written as being on the autism spectrum. I am not on the spectrum, I know someone who has a son with autism, but that’s about it. I do know that I liked her throughout the book very much, she is written as someone I would have wanted to be friends with. Although I think in couple of places the author forgot that Molly was supposed to misread the intentions of others, because the plot needed to move the certain way.

Now the blurb would make you believe that the story was also a mystery and I suppose it was. As the blurb tells you, Molly finds the corpse of one of the guests in the room she was cleaning and she becomes a suspect. The best part of the book for me was her friends banging together and figuring out how to help her out, clear her name, figure out what really happened, etc.

Only the mystery was strange because almost right away, Molly and her friends suspect someone (a very BAD person) and figure out how to trap him and catch him in the process of committing another crime. This person eventually goes to jail for the murder described in the blurb. My little problem was that as it turned out, they (using they to conceal the gender) did not commit this murder. There were other crimes this person committed but not murder. They certainly deserved to be in jail for other crimes, but not this murder.

Apparently our Molly, who narrated the story, just chose to withhold the name of the person who really committed the murder so she shares this with the reader on the last couple of pages
I did not like the resolution of the mystery.