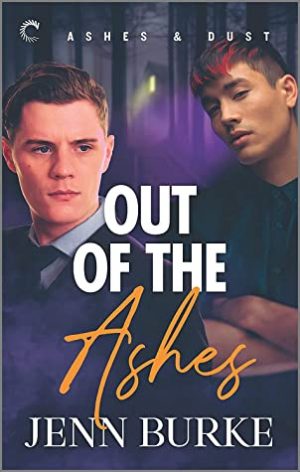 Some bonds weren’t meant to be broken.

Vampire PI Evan Fournier has dealt with his fair share of danger and heartache, but nothing prepares him for the pain of a broken bond with his mate—especially when his mate is the one who severed it. Bond or no, he still loves Colin—fiercely. Trust, however, is harder to come by. And when a demon starts terrorizing paranormals in Toronto, trust in one another is exactly what they’ll need.

Former firefighter turned crime-fighting phoenix Colin Zhang knows who Evan was—is—to him, but he doesn’t know if he can give him what he wants. He just needs a little time to figure things out. Unfortunately, bringing down a demon bent on mass murder leaves little time for anything else.

The only way they’ll destroy the demon is by teaming up with an unlikely partner to infiltrate a gang of terrorists. But the only way they’ll save themselves is by finding a path back into each other’s arms—and hearts—once again.

I wanted to second the recommendation to read the “Not Dead Yet” trilogy before starting these books and certainly suggest not to start this trilogy from this book. You will be confused – both in terms of character development and plot which was complicated enough.

I reviewed the previous book in this trilogy with Kaetrin at DA and I just had to know the ending even though I had some issues with the second book. In fact since blurb talks about the broken bond between Evan and Colin, the bond that Colin broke, I think I should talk about that first because that was one of my main issues with book 2.

I am going to reiterate again – I am not the kind of reader who cares much for the “mate bond as a short cut for love” trope. I much prefer when a bond develops after the protagonists fell in love, or along with it, or when the writer comes up with something interesting and creative to do with the bond. Not just – “oh we feel the bond, we are going to be in love forever and ever” kind of thing. I would have had no issues with Colin wanting to break/breaking a bond which was behaving strangely and formed under weird circumstances. I got his motivations and seeing him and Evan getting to know each other slowly would have been nice. However, the timing in book two when he actually did it was very much off for me – it felt like a sequel bait.

I was definitely willing to see, however, where their relationship would go in book three and I will be honest with you – based on how it went, I still mostly have no idea why Colin decided that breaking the bond made sense in the first place. I understood the part that the bond freely formed apparently behaves better, so that kinda makes sense, the only problem is I have not really seen it on page *how differently it behaves*, but … whatever. We are told that magic wanted flies freely or something like that and if I remember correctly that was it.

Having said all of that, I liked their chemistry, it is just their romantic story line did not feel organic to me.

To circle back to getting to know each other, I understand perfectly that these books also have suspense storylines front and center. I understood that both Evan and Colin were very busy all the time or almost all the time and often their lives were in danger. I get it, but it still felt off somehow. It felt like the author wanted to create angst out of nowhere, but the characters did not have much time for the proper development of their relationship and the story became what it became.

Let’s talk about the suspense/ mystery storyline. It was certainly a choice to reveal the main culprit so early in the book, but for me it was a disappointing one. Having said that, the suspense storyline (because that’s what book became for me) was mostly enjoyable, except I had to roll my eyes about Evan and Colin being in the life or death situation and Evan not wanting to call Wes because then everybody would die – everybody who was trying to actually kill them mind you. It is not that I did not understand the idea that Evan did not want everybody to die in theory. It is that I did not buy for a second that Evan would not call Wes being you know, so close to death. And yes, they find a way out, but I thought this way to take Wes out of the fight to be clumsy.

But overall suspense story was fine if we don’t take this part into account.