Your Victorian-era historical romance, Dark Season, came to my attention via this article in Publishers Weekly. The article mentioned that you are a professor who writes literary fiction under the name Joanna Ruocco, and that you have received the prestigious Pushcart Prize. This, in addition to the mention of your upcoming historical romance trilogy, sold at a three-house auction for a six-figure advance and to be published under the pen name of Joanna Lowell, made me curious. I googled you and saw that you had a few e-published romances as well, and I decided to try this one. 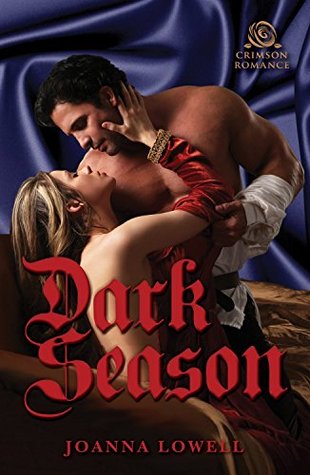 The trope isn’t a favorite of mine—the heroine is a fake spiritualist conning someone the hero cares about and the hero is suspicious of her and her motives. I tend to dislike con artist protagonists, but this book had an unusual twist on the premise because Ella, the heroine, was in desperate straits and hadn’t set out to present herself as a spiritualist.

Ella, an epileptic, is in attendance at a spiritualist show when she first comes across Louisa Trombly. Mrs. Trombly, a genteel lady who grieves for Phillipa, a daughter who fell to her death five years earlier, is also in attendance. She is glad to be called on by the performing medium, Miss Seymour. But that interchange is disrupted when Ella has a seizure.

Miss Seymour claims that Ella’s epileptic seizure was a visitation from Phillipa. The grateful Mrs. Trombly kindly takes Ella to her home while Ella is still unconscious, so that Ella can recover there. When Ella wakes, Mrs. Trombly offers to hire her as a private medium.

Ella has nowhere to go—her cousin Alfred inherited her father’s fortune and, because of her epilepsy, has sent her to a Swiss colony. Alfred threatened to lock her up in an asylum if she doesn’t go along with his wishes. But Ella got off her train in London. She has survived since then by selling her jewels while trying to find a job as a governess, but she is fast running out of money. So Ella accepts the position with Mrs. Trombly. To evade Alfred’s discovery, she presents herself as Miss Eleanor Reed.

Isidore, Viscount Blackwood, was once engaged to Phillipa Trombly. Although the engagement wasn’t quite what it appeared, Isidore and Phillipa were was very close and he was devastated when Phillipa fell to her death off a balcony at a party. He even wonders if it was a suicide—if Phillipa deliberately jumped. Just prior to her death, Isidore and Phillipa had a bitter fight, and even though he traveled far and wide to escape his guilt, Isidore is filled with anguish even five years later.

Ella and Isidore meet after he comes upon her at Mrs. Tromby’s house. By happenstance, she is expertly playing Phillipa’s favorite sonata on the harp. Ella is musically gifted and playing off the sheet music, but Isidore mistakes it for a performance, part of a scheme to make Mrs. Trombly believe that Ella is in contact with Phillipa—that Phillipa has reached out to her mother from beyond. Isidore can’t stand to see Mrs. Trombly taken advantage of in her grief, and feels that he must put a stop to Ella’s manipulations.

Not only is Isidore angry over this (Mrs. Trombly was a loving, maternal figure in his painful childhood after his own mother died), undergirding his anger is fear. The vulnerable and guilt-burdened part of him is even more worries that Ella is genuinely a spiritualist. If she is, she could reveal things about Phillipa that would hurt Mrs. Trombly and ruin Phillipa’s good name.

But Isidore quickly comes to understand that Ella isn’t truly in touch with Phillipa. The inconsistencies in her story—she is clearly too well-educated and brought up to be a commoner– bother and intrigue him. So does the way Ella struggles to exert control over her body at all times. She’s anxious about the possibility of having another seizure in public but he doesn’t know that.

Ella, conscious of his scrutiny, fears that he will uncover the truth and expose her to Alfred. But upon his realization that she is no threat, Isidore backs off, and very quickly they begin to fall in love.

Eventually, after Isidore learns that Phillipa’s death was no accident, he persuades Ella to team up with him to help him discover what actually happened that night.

Isidore and Ella have difficult childhoods in common. Ella was sequestered for her own sake; it was thought that stimuli could trigger seizures in epileptics generally (Wikipedia tells me that in reality this form of epilepsy, known as reflex epilepsy, applies to roughly 5% of epileptics). Isidore’s father was abusive and isolated him—Isidore was lucky that the Tromblys were neighbors. Whenever he thought he could get away with it he snuck out to visit them despite the certainty of being brutally punished for it.

I loved the parallels between them. As a result of their childhoods, both Ella and Isidore are alienated from an aspect of their selves. Ella’s doctor told her that her condition will degrade and lead her to harm herself and others and she fears this eventuality. Isidore has a quick temper and believes that he is, at bottom, a violent brute like his father. Between this, his worries over the secret he carries, and his questions about Phillipa’s death, he too is tormented.

All this causes Isidore and Ella to impose isolation on themselves. Each of the characters is lonely as a result. Each of them recognizes this in the other, sees through to the vulnerability behind the facade. Both of them are endearing. All that was wonderful.

Initially, I worried that there would be a lot of suspiciousness and anger in Dark Season, but there is less than I feared. Isidore gets over his fury quickly. If anything, he and Ella fell in love too fast; one (albeit very lengthy) kiss dismantles Isidore’s anger. Within the same scene he learns that Ella doesn’t know Phillipa’s secrets and relaxes further. I rolled my eyes a bit at how fast this happened. Their insta-connection was fleshed out and become more persuasive over the course of the story, though.

I discussed the book with a friend who made an excellent point: more could have been done with the secondary characters and with the Victorian obsession with the supernatural. After a promising beginning, the external conflicts dropped under the radar for a long while and the middle of the book sagged.

It didn’t help that the mystery around Phillipa’s death wasn’t particularly intricate—part of the motive for her murder was pretty clear all along.

Dark Season is written in a prose style that is not only smooth but also pretty, with great descriptions and metaphors. The dialogue sparkles and has a period feel. Here, for example, is an outtake from a scene in which Isidore shows up at his friend Daphne’s house long after he was supposed to appear for a dinner.

“We expected you last week,” Daphne prompted when a few moments passed without his offering any kind of response.

“Yes, about that…” Isidore rubbed his thumb along his jaw, the airy, charming excuse and the off-color anecdotes vanishing from his mind. Daphne was looking at him with interest, one delicate brow raised, as though she enjoyed watching him squirm.

“I should have sent a note, but what would I have written?” He wrote in the air with his forefinger. “Sick of it all, let’s meet instead on a farther shore, Sid?”

“You could have made up a polite excuse,” said Daphne dryly. “Something less dramatic. Bad cough. Pressing business. Allergic to turbot. Anything, really.”

Isidore laughed. Daphne was so tiny and exquisite that people made the mistake of thinking her a perfect little doll—masses of red-gold hair, round blue eyes that opened and closed, head filled with sawdust.

I was jarred from luxuriating in the elegant language by a few anachronistic expressions, though: “wrapped my mind around,” (its forerunner, “get my head around,” is from 1922–this and all dates per OED unless otherwise specified), “Red flags,” (figurative meaning, 1968) “kissed the daylights out of,” (couldn’t find in google books before 1931) “restructuring,” (1932) “private agendas” (1976).

Part of the reason I noticed these was because I wasn’t wholly absorbed. That’s largely because the characters sometimes have very long reveries. I didn’t count the paragraphs except once; that reverie continued uninterrupted for six paragraphs.

This may sound like an irrelevant nitpick but it actually matters a lot. One of the effects it has is that it puts the characters so much in their own heads that it’s hard to feel they are engaging with the world or each other enough, or that they are thoroughly invested in the events of the story. Isidore and Ella’s introspection is well-conveyed but the responses of their hearts are less so, and so they come across as a bit detached—from themselves and from each other.

Additionally, if someone is sitting and thinking for six paragraphs, then unless they are making a huge decision, it can feel like nothing is happening. And when a character is in the room with someone else but has a long reverie about something tangential to the conversation that is taking place, it doesn’t seem like the conversation matters.

Because of all this, the first half of the book feels slow and even boring in places. Sometimes it was an effort to focus. This style of writing is suited to literary fiction, but in genre novels the characters need to be more present and the pacing needs to move faster—unless a character is experiencing a suspenseful moment in slow-motion, actions need to take equal or less time to read than they would to unfold in real life.

I had mixed feelings about the way Ella’s epilepsy was portrayed. There’s no question that Ella had internalized ableism. But given what she had been told by her doctor as well as the nineteenth-century attitudes toward epilepsy (epileptics were thought prone to violence and likely to go mad and/or lose control of themselves), her fears about her own nature were understandable to a degree.

I wasn’t entirely sold on the way Ella fought to impose control on her body even when not experiencing seizures, though. It did make for compelling sex scenes but consent was questionable in the first of these.

Loose ends were left hanging at the end—I wondered how Isidore and Ella would explain to Mrs. Trombly that Ella’s seizures had nothing to do with the dead Phillipa, or how Ella’s assumption of the fake identity of Miss Reed would factor in with Isidore and Ella’s social peers when Ella became the Viscountess Blackwood.

Nevertheless, the last third of the book was wonderful. It’s a shame I can’t say more about it because of spoilers since it was good enough to make up for a good part of my earlier frustration. It convinced me that Ella and Isidore were perfect for each other; that they fit together like two pieces of a puzzle.

I wish there had been more of that, as well as more plot, earlier in the book. I’d love to read a Lowell novel that sustains that kind of romantic tension for the entire length of the book. Maybe the first novel in your upcoming trilogy with Berkley will. I’ll probably read it to see.