Reading your first foray into the romance genre, Bitter Spirits, was an interesting experience because I wasn’t sure what to think of the book. Some aspects of it were excellent, others weak, and still others somewhat discomfiting. I started out distracted and occasionally even annoyed in the first third, was absorbed and entertained in the middle, but in the last quarter, some of my enjoyment waned. 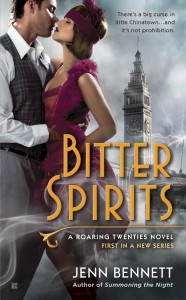 More on why in a moment, but first, a plot summary.

The novel takes place in 1927 and its heroine, Aida Palmer, is a spirit medium. She travels across the country from club to club, conducting séances at speakeasies and, as someone dear to her taught her, maintaining her independence and living only for today.

Aida is temporarily lodging in San Francisco’s Chinatown and working at the Gris-Gris speakeasy when Winter Magnusson, a wealthy bootlegger appears at the nightclub and asks for her assistance.

Winter has recently begun to be haunted by ghosts, and he needs Aida’s help to banish them. Aida succeeds in getting a ghost she sees in his presence to depart, but it turns out something Winter ingested is drawing the ghosts to him, as well as making him able to see them.

Getting the poison out of Winter’s system falls to Velma, the Gris-Gris’ owner, who has some talent for sorcery. This involves a gruesome bath, and Aida gets an eyeful. She is seized by lust.

But Aida and Winter each have insecurities, Winter about a scarred eye and Aida about skin covered with freckles. They each find the other attractive but are sure their attraction cannot be reciprocated.

A powerful enemy is out to destroy Winter using Chinese black magic, ghosts, and necromancy and Winter needs Aida’s help to find and defeat this person almost as much as he needs her body beneath him in bed. But can he open up to her about his painful past? Aida desires Winter just as badly, but can she overcome her reticence where sex is concerned, and can she sacrifice the independence she holds so dear?

Bitter Spirits came highly recommended by friends and at first I wasn’t sure why. True, the setting was unusual, the worldbuilding strong, and the characters seemed like they had potential, but initially, before the corporeal ghost appeared, Winter and Aida’s encounters seemed almost episodic, without a strong conflict or goal pull the scenes together into cohesion.

Then there was the mental lusting. I’ll concede that it was less clichéd than typical of mental lusting —instead of wondering about the color of Aida’s nipples, Winter wondered if they were covered with freckles—but it still felt forced, especially early on when each was a complete stranger to the other and had much bigger concerns, like performing exorcisms and taking an ice bath in water filled with centipede and scorpion magic.

Things improved a bit after that, but the entire getting to know each other phase was so focused on their physical attraction that when, about 40% of the way though the book, Aida got mad at Winter for not sharing his tragic past with her, I had a hard time buying that she would be as hurt and devastated as she was, because up until then she had seemed more interested in Winter’s body than in him as a person, and likewise for Winter.

In the first third or so, I was distracted enough to notice some craftsmanship issues, including the occasional awkward metaphor or use of clichés like “Guess I’m a glutton for punishment” and “If she had a penny for every time she’d heard that…” and one instance of slippage into contemporary diction in the dialogue: “Not seeing how this is a problem.”

But after Winter and Aida’s big fight at the 40% mark, the story, like the characters’ romance, began to turn around for the better. Winter and Aida started sharing more of themselves with each other, not just physically but also emotionally, and I was able to see what loveable people they both were.

Winter had lost a lot in the accident that gave him his scar, but even before that, and his experiences left him feeling unwanted and commitment-shy. Yet even so, and even before he recognized his love for her, he treated Aida with great care, and began trusting her with his heart.

Aida also knew about loss, having suffered quite a bit of it. Her love life too had been less than spectacular. And yet, for all that Winter had the wealth to shower her with gifts, and a great deal of sweetness during the love scenes, Aida gave him something equally valuable: encouragement to seize the moment and stop living in the past.

Along with the development of the romance, the threats from the villain escalated and the novel became more cohesive as well as dramatic as Aida and Winter worked to try to discover who was the source of this threat.

As mentioned before, the worldbuilding was strong in that the book had both a period feel and a consistent magical system. The ghosts felt like a real threat when they appeared, and this plot was intertwined well with the romance plot, so that both grew more compelling together.

Thus, as I was heading into the final fifth of the novel, I was feeling much better about it than I had in the first third but then at the 82% mark, the identity of the villain and his or her motive for the mayhem he or she had caused were revealed. The spoilers below doe’t reveal the villain’s identity, but they do give clues to it, as well as reveal his or her motive.

I have to reveal that this character is Chinese-American, because it is relevant to one of my concerns.

The novel is set partly in San Francisco’s Chinatown (Aida lives there) and several Chinese American characters play a role in it. One is Winter’s right hand man, one is Aida’s landlady as well as the owner of a Chinese restaurant, one an acupuncturist, two are thugs, one a gangster, and one that gangster’s prostitute.

Roughly half of these characters were at least somewhat sympathetic, and one was fleshed out and given dimension. I have the feeling we’ll be seeing more of that character, whom I liked a lot, in upcoming books, and perhaps even in a central role.

Because of that, and because the main characters were a bootlegger and a speakeasy performer, I accepted the fact that some of the Asian-American supporting characters were somewhat seedy and/or flat.

I started questioning that, though, when one of the Chinese-American characters was revealed to be the villain, and that person turned out not only to be mad and practicing Chinese black magic, but then came the revelation about his or her motives.

”I was chosen by celestial deities to lead a quiet rebellion. My shen spirits brought me across the ocean from Hong-Kong to save my people from the Gwai-lo. The Chinese have been treated like slaves in this country, captured like pigs, forced to build your railroads. After the Great Fire, the city tried to move Chinatown and seize our land, and when we resisted, you kept us in cages on Angel Island, separating our families for years.”

The persecution of Chinese Americans in early 20th century California was all too real, so I was discomfited by the way this history was put in the mouth of an insane, black magic wielding Chinese American villain.

It seems to trivialize a painful history, and as I read this it also made me wonder whether I was cutting the book too much slack with regard to the backgrounds of some of the Chinese American characters.

To be honest, I still can’t decide about that, but I know that wondering about it made it hard to go back to my entertained, engrossed state and enjoy the resolution of the romantic plotline, which could have been lovely otherwise.

A lot of people I know love this book, and it is indeed a polished debut. Still, for me, there were enough snags and concerns to mar half the book, and even though I enjoyed the rest of it quite a lot, I can’t grade the whole above a C+.

→ Janine
Previous article: REVIEW: The First Boy I Loved by Cheryl Reavis
Next Post: Thursday News: DA offline on Friday, Shakespeare the scientist, art and failure, sensory books, a love like P&P, and B&N YA exclusives