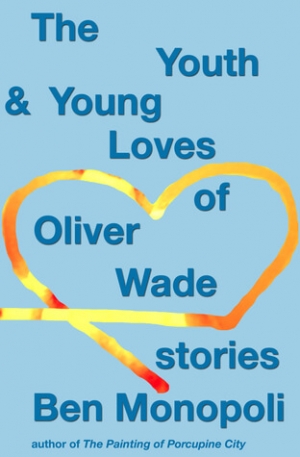 What makes us who we are? Is it life’s big milestones that propel us from childhood to adulthood? Or are we made of all the little memories that have a way of standing in for so much more?

In the twelve stories in The Youth & Young Loves of Oliver Wade, Ben Monopoli shows us these pulses in the life of our narrator Ollie as he grows from age thirteen to twenty-eight. Pulses that define who Ollie is, and ultimately who he’ll become.

A stand-alone companion to The Painting of Porcupine City and The Cranberry Hush.

I enjoy your writing. I like that your stories are different from many m/m/gay romance books I have read before. I will admit that “The Painting of Porcupine City” went in the territory I never wanted to see, so I only skimmed it. I do not think that readers who have not read either of the two books mentioned in the blurb should worry, though – you won’t be confused, the connection to “Porcupine city” comes close to the end and it is not at all hard to understand without reading that book.

I have to admit that when I finished this story, I was so confused that I had to go and look at a couple of the most helpful Amazon reviews. A review by Ulysses (who gave the book a high grade) confirmed the source of my confusion: This book reads like a memoir – yes, it is a work of fiction, but the narrator describes his life from the age 13 till the age 28.

Before you ask, of course this is not the first fictional book disguised as a memoir that I have read; however usually the story has a theme apart from the narrator describing different events, and I just could not figure out what the theme was. I guess the theme was that he was figuring out where he belongs, because as I said the book stopped when he did figure it out, but maybe the execution did not work for me.

There was often a skip ahead of one or two years between chapters, and the book stops when he is 28 and has presumably found where he belongs. You know how sometimes when you read a book which is a collection of separate stories, sometimes it feels fragmentary? I did not feel like that when I was reading this one at all. Each story felt like a chapter, part of a novel, and I thought it was a good thing.

We meet Ollie at the age thirteen, when he and some of his friends are deciding to go “STAG” to the prom – supposedly because they want to go alone, but really because they could not get dates. We learn that Ollie is different because he knows he likes boys and he really does want to go alone, but a girl asks him and he ends up miserable. We see him couple years later going through all the misery of falling in love with his friend. We witness Ollie wanting to tell his parents that he is gay before he goes away for college and his parents surprising him in a good way. We see him making and losing friends in college, and his experiences after college. I just was not sure why all of those experiences were being described in such painstaking detail.

This book is not a romance, but it has a hopeful ending in the romantic department. We meet the guy with whom Ollie ends up very late in the book, so definitely do not expect the book to be the story of the building of the successful relationship. We are shown some of Ollie’s previous attempts at relationship in the course of the novel and they are beautifully written. Also, I want to stress that I have read a lot of coming of age gay fiction stories and many of those have worked very well for me, without being romances, so this book not being a romance is not a problem. The only thing which can make me dislike non-romantic books is a tragic ending at the end, and if the book is good I will never lower the grade for that personal reaction. And this book does not have a tragic ending.

I guess what this comes down to at the end is that most of the time while I was reading this story I was bored. I liked Ollie, but imagine me sitting down to describe the events in my life without making *the reason* why I am doing so clear for the reader. As I said – I suspect that the “finding the sense of belonging” was that reason, but it just was not enough for me in order to make it a satisfying novel. I feel a little bad, but I know that I will never reread this one so I cannot give it a higher grade.