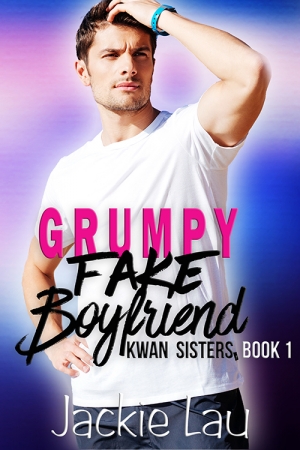 I am a fan of grumpy heroes in general and I also enjoy the fake relationship trope so this book sounded like my catnip. While there were definitely things I liked about it, it didn’t quite knock my socks off either and it took me a while to put my finger on exactly why that might be – because on the face of it, everything I love was right there.

Naomi Kwan had been dating a guy named Jordan for two years but they broke up six months before. Jordan had introduced Naomi to two other couples who all stay at a beach house every Canada Day weekend together. Even though they’ve split up and Jordan has a new girlfriend, Naomi has been invited this year. She doesn’t want to go alone and be the seventh wheel. She prevails upon her brother Jeremy to ask his friend Will to help her out.

Will Stafford is an introverted science fiction writer with few friends. One of his two not-online friends is Jeremy Kwan. Will is reluctant. Socialising is loathsome to him, particularly with strangers and particularly for long periods of time. Spending three whole days with a group of seven other people, only one of which he actually knows sounds like his idea of torture. However, Jeremy is his only local friend and Will owes him so he reluctantly agrees. He expects to be miserable the entire weekend.

Naomi had a crush on Will when she was 12 years old but has long since got over it. Still, when she was thinking about who could be a good fake boyfriend, her mind went straight away to Will. It’s fair to say she wouldn’t mind doing a bit exploring on the weekend if the opportunity arises but she’s not banking on it either.

Will has a poor track record with relationships. His experience is that women want to change him and he is pretty comfortable with who he is. His experience with family is the same actually – they are always on at him to be more social and less introverted. Will is still scarred from his parents’ efforts to try and build extroversion in him as a child.

Initially, Will came across as a bit of a jerk. He and Naomi bicker all the way to the beach house and Will’s grumpiness scooched over into jerk territory there. However, after they arrive at the beach house, things settle down and he’s just grumpy. I think the bickering about the driving and the crumbs on the car seats and the later “argument” about taking up too much room in the bed was supposed to be more humorous than I found it. There were things I chuckled about in the book, but unfortunately, these sections felt not so much funny as… kind of annoying. At times I felt for Naomi as she had to navigate Will’s tetchiness.

That said, he does come through for her when it counts and there were a lot of sweetly charming encounters too.

I did smirk at Will’s introduction to one of the couples and Ian in particular:

“I’m Ridhi.” She’s a little bigger than Naomi, with light brown skin and black hair that ends at her lower back. South Asian, I think. “And this is Ian.” She tilts her head toward the door, where a tall man—maybe Chinese or Korean—is standing. We nod at each other, and that’s that.

“Ian has read your books,” Ridhi says. “He’s very excited to meet you.”

Um. Yeah. Ian sure looks excited. He smiles at me and nods again.

I think the two of us will get along okay. I’m already planning our bromance. Maybe we can go fishing together in silence, leaving everyone else to lounge on the beach and catch up.

One of the problems I have when a main character is an author is that the story can get a little meta. I don’t know if this is something other readers experience, but when I read about an author reading reviews for amusement and mocking them however gently, it feels a little uncomfortable for me.

I’m not in the mood to read a fantasy novel, so I go to Goodreads and look up reviews for my books. This is probably not the healthiest thing for an author to do, but it can be entertaining. The bad reviews in particular.

I was enjoying this book until page 45. I couldn’t believe my eyes when the F-word appeared three times in three pages. DNF.

People who trash novels because they contain swear words confuse me. I don’t fucking understand them.

Another reviewer describes me as a heathen. I don’t bother reading how he came to that conclusion, though he happens to be correct.

Then there’s this one: This book epitomizes everything that is wrong with science fiction today. Isaac Asimov would be rolling in his grave. It was a bore from start to finish. Six hours of my life I will never get back. The author seems to fancy himself a comedian, but the book is not funny. At all.

The review goes on and on, describing my many failures as a writer. I can’t help but wonder why the reader finished the book if he hated it so much, and why he wasted even more of his time writing such a tedious review.

Here I think it was one of those times where the humour of the story was a bit lost on me.

The main thing that kept me from completely loving the story though was something about the writing style. Both Naomi’s and Will’s sections were a little sparse on adjectives and the transitions felt a little abrupt.

I lower my chest to hers and bury my head against her shoulder as I finish inside her. She cries out again, trembling beneath me.

We separate a moment later, and she gives me a lazy smile of satisfaction.

I can’t imagine asking for anything more.

I’ve come to the conclusion that I need a bit more ‘seduction’.  That probably says something about me. [insert joke about me playing ‘hard to get’ here]

There were some fabulous things about the book. I loved the sections where the friends were describing traditional wedding games relevant to their various cultures. In one, the couple sit back to back each holding one of their shoes and one of their partner’s shoes. They play a kind of “dating game” where they signal their answers by holding up the shoe of the person to whom the answer applies most (such as “who is messier?” for example). Naomi and Will play their own version of it with socks in their room later and I particularly liked this bit:

Interesting that this is the question she wants to ask.

I hold up my sock. She holds up hers.

“This is a question with a right and wrong answer,” I say.

“And you think that beats mine? How cute.”

My eyes widen slightly. “What’s yours?”

“Twenty-three.” She says it proudly, which makes me smile.

How often does that happen in romance? Brava!

Also, Naomi is an an axe-throwing competition and I give many points to a heroine who throws an axe, particularly with accuracy. I’d have liked even more of it in the story actually.

I did believe the HEA. I did buy their relationship at the end. I believed they’d be happy together in the long term and their differences (which are legion) wouldn’t tear them apart. Both Naomi and Will appreciated what the other needed to be happy and didn’t begrudge those things to the other. I’d have liked to have seen Naomi interacting with Will’s family to see how that would go. I have a feeling she’d protect him from the worst of their badgering.