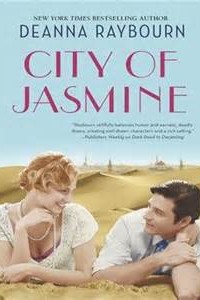 Famed aviatrix Evangeline Starke never expected to see her husband, adventurer Gabriel Starke, ever again. They had been a golden couple, enjoying a whirlwind courtship amid the backdrop of a glittering social set in prewar London until his sudden death with the sinking of the Lusitania. Five years later, beginning to embrace life again, Evie embarks upon a flight around the world, collecting fame and admirers along the way. In the midst of her triumphant tour, she is shocked to receive a mysterious—and recent—photograph of Gabriel, which brings her ambitious stunt to a screeching halt.

With her eccentric aunt Dove in tow, Evie tracks the source of the photo to the ancient City of Jasmine, Damascus. There she discovers that nothing is as it seems. Danger lurks at every turn, and at stake is a priceless relic, an artifact once lost to time and so valuable that criminals will stop at nothing to acquire it—even murder. Leaving the jewelled city behind, Evie sets off across the punishing sands of the desert to unearth the truth of Gabriel’s disappearance and retrieve a relic straight from the pages of history.

Along the way, Evie must come to terms with the deception that parted her from Gabriel and the passion that will change her destiny forever….

After enjoying “Night of a Thousand Stars,”” I decided to go back and read this prequel that I hadn’t had time to finish before its release earlier this year. There was a brief appearance of one of these main characters in it and I found him delightful. There were also quick references to the events of this book which intrigued me despite me now knowing the big relic secret here. But though the book starts with a bang, it ends with a whimper.

The story begins with Evie and her entourage consisting of Evie’s eccentric Aunt Dove – an apparent wild woman of the late Victorian age – and her mechanic Vyvyan (what is with the British aristocratic love of y’s?) heir to a Viscountancy and ace mechanic. Evie is on a world flying tour which is outwardly filled with glamor and famous people but which in reality she is doing to pay the bills. Aunt Dove comes over as more eccentric on principle than in truth with her clothes, pet bird and seductions but I loved the relationship of Evie with her friend Wally – as he prefers to be known. Unfortunately he is soon out of the picture and only briefly pops back in very much later. Boo.

When Evie receives a mysterious picture with her “dead” husband in it, she has to know the truth. Is he dead as she thought these past five years or did he fake his death? She might have filled for divorce in desperation and pain at the “loss” of the man she married in a truly whirlwind courtship – Scotland’s marriage laws to the rescue – but she’s been plagued by why’s, what if’s, anger and the need to know the truth of why their marriage turned bad so quickly after starting with them so deeply in love. Now she just might get answers and by God she’s going to try.

I admired her determination for the truth much as I did how she managed to support herself and Dove over the years. After they arrive in Damascus, Evie begins to suss out the situation while admiring the city, its culture and her people. The scenes of the city are wonderful and I sat back enjoying my armchair view of early 1920s Damascus while envying Evie all the scrumptious food she gets to eat.

Soon however the book shifts as Evie and Gabriel are finally reunited. I had already worked out this early surprise as did Evie. Bully for her in expressing her displeasure to him and not giving an inch in what she’s owed. Evie’s got agency and intelligence and some cool sang froid. After an interval of 5 years during which her heart ached for Gabriel, she doesn’t throw herself on him, raining kisses and swearing eternal love – so happy that he’s alive. No, she gets her “I’m pissed off” points in without either showing her ass or forgiving him immediately. She wants him to know how much he hurt her. Then she manages to dictate herself into his plans all while getting him hot under the collar. She’s matured over the 5 years and it shows in her actions rather than me being told that before she does something stupid to ruin the impression.

Soon Evie’s in the thick of things while annoying Gabriel to no end. The other people at the excavation dig are interesting including Miss Green – a stout British woman in tweeds does go on about the French and slightly about the Hungarians. All very proper British umbrage at the situation now that Britian has been shoved out of Syria. The political situation gets nicely outlined – enough to get a reader’s diplomatic legs under them without it taking over the narrative.

This section is more like a reader’s Raiders of the Lost Ark – Evie and Gabriel head out like Indiana Jones to find a priceless object, marching across desert sands and tripping over rocks. Okay so maybe not quite with Indy’s dash and soaring music but close. I really enjoyed watching these two bicker and snark at each other. It’s like foreplay for them.

Evie is pluck and determination. She’s fit and can keep up with no whingeing or complaining. She’s the one who decides, “to hell with all the obstacles, we’re not going to give up.” Go Evie. Poor thing is so disappointed when Gabriel admits that he’s making up how to survive the perilous situation they find themselves in rather than being some criminal mastermind with every step mapped out in advance and with 3 escape plans up his sleeve.

Continuing in the Saturday mantinee feel, Evie and Gabriel come repeatedly to the brink of failure then are saved at the last minute by an unforeseen event or person. The villains of the piece are fairly easy to spot just because they’re described as not being evil or menacing looking. My villdar went off at all of them. The saves aren’t complete stretches of the imagination or blatantly deus ex machinas so I’m good with this.

Then the situation changes again and the book takes on a different feel and not one I was wild about. A new set of characters enter and suddenly the exchanges between Evie and Gabriel take on a darker feel. Where before their dialog had seemed a bit more like a 1930s screwball comedy exchange, now the snark seems intentionally nasty. It also dawns on me that Gabriel still hasn’t answered Evie’s questions about the missing five years. Before, they were trying to survive but now have time on their hands and still nothing is said. Evie also suddenly shows dense moments about things and people that seem fairly clear to me.

This part of the book meanders around a lot with not much happening. Gabriel knows people here who shelter them so this is basically Evie learning about the Bedu with more politics thrown in. Evie and Gabriel are keen on Arab independence. Perhaps this makes up for the earlier expressed views on the Irish and the Turks. It’s also obvious that Gabriel is still in love with Evie despite his cantankerous attitude and verbal nastiness. It’s the romance novel’s “I love you so I must act as if I hate you” Old Skool syndrome.

During this part, the book pauses for Gabriel to finally give Evie some answers. Great, long pages of exposition later I do feel for the man about the choices he was forced to make and deal with but had I been Evie, I would have been furious with him for not telling me everything and for making all the decisions while leaving me in a five year world of pain and hurt.

The plot now builds to a climax and I get a whiff of the White Savior complex. Gabriel is going to join his Bedu brother and tribesmen in saving their people. Evie’s been dense about who is the fabled Saqr – the Falcon of the Desert who rallied his people to fight against their dreaded Turkish overlords during the war. While I appreciate who she initially thinks is Saqr, when the truth is revealed I was disappointed. She also calls another character on being patronizing towards the Bedu then literally in the next breath, she announces she’s going to join him in exactly what she just denounced.

With most of the villains defeated – and having slogged through yet more exposition about that – and most of the relic reclaimed, I thought, “we’re done here, right?” But no, like a prop plane losing engine power, the story sputters on as it seems to drift to a close. Evie’s on her own again and I said, WTF? Not more of this again! When she and Gabriel are finally back together, we hear second hand how he tracked down and tied up the last dangling plot points. WTF? I wanted to see that but no such luck. As the sun sets, Evie and Gabriel appear to be heading for a quiet life abroad and I’m left disappointed in this lackluster second half and ending to what had started out as such a strong story. All considered, my grade is a mixed bag C