REVIEW: Before I Go to Sleep by S.J. Watson

Your first novel, a psychological thriller titled Before I Go to Sleep, has garnered considerable attention. The cover of my advanced reader’s edition proclaims that rights have been sold in over thirty countries, and movie rights sold to acclaimed director Ridley Scott. There are blurbs from Tess Gerritsen and Dennis Lehane calling it “Quite simply the best debut I’ve ever read,” and “Exceptional,” respectively. 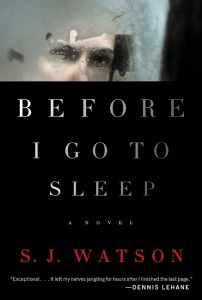 Before I Go to Sleep opens in present day England when its narrator, Christine Lucas, wakes up. Christine finds herself lying next to a middle-aged man whom she doesn’t recognize. The man is wearing a wedding ring and Christine is revolted by the realization she must have slept with a married man, and not even in a hotel room, but in his and his wife’s home.

But when she goes to the bathroom and sees herself in the mirror, Christine is further shocked to realize that she herself is middle-aged, and she too wears a wedding band. Christine isn’t the twenty-something she thought she was, but a woman in her late forties: a woman with amnesia.

After seeing herself in photographs on the wall, pictured with the man beside whom she’d woken, Christine confronts the sleeping man – her husband, Ben. “You seem to be able to retain information while you’re awake,” Ben tells her. “But then, when you sleep, most of it goes.”

After Ben leaves to go to work, Christine receives a telephone call from a man named Dr. Nash. Dr. Nash tells Christine that they have been meeting to work together on trying to restore her memories. Although initially suspicious, Christine allows Dr. Nash to make a house call. They go to a nearby park and it is there that Dr. Nash explains to Christine that she has been keeping a journal as part of her treatment.

Dr. Nash says that when they began working together, Christine decided not to confide in Ben about their work. She did not want to raise her husband’s hopes until she and Dr. Nash saw measurable improvement in her condition. Dr. Nash gives Christine the journal, which she had given to him to read.

When she returns home she is stunned to see that on the journal’s front page she has written “DON’T TRUST BEN.”

Before I Go to Sleep is divided into three parts. The brief Part I which I have just summarized, is narrated in first person present tense. Part II, the longest section, comprised of Christine’s journal, is written in first person past tense. The book’s last quarter takes place after Christine has read the journal, and since it includes the ending, I probably should say no more about it.

Christine’s journal shows how Christine begins each day with little memory of the past twenty or so years of her life. Some days she remembers a bit, others she is lost in a mist. But her journal is Christine’s tether to reality, to the past, to the future, to the passage of time. Each day Dr. Nash calls her and reminds her where it is hidden, and most days Christine reads it and records the events of that day.

Eventually a picture emerges: Ben, Christine’s husband and caretaker, isn’t being entirely honest with Christine. He omits certain details when he tells her of their past, and as her therapy starts working and Christine begins to recall bits and pieces of that past, she grows more and more troubled by Ben’s omissions.

Is the feeling that tells Christine not to trust Ben paranoia, or is Christine’s gut sending her a message worth heeding? Is Ben a loving husband leaving out the most painful details of Christine’s past so as not to cause her to relive past traumas day after day, or does he have a more sinister motive?

There are only a handful of characters in Before I Go to Sleep. For most of the novel, Christine’s only recurrent contacts are Ben and Dr. Nash, and she rarely leaves the house she shares with Ben. That aspect of the book created a claustrophobic feeling in me, one that served to show how confined Christine’s world has become since her memory loss. In contrast, Christine’s rare flashbacks showed that she once led a much fuller and larger life.

Christine’s narration gives the reader an unusual depth of insight into how awful it must be to wake up each day with no memories of the previous day. The context of the novel gives many reasons to sympathize with Christine, but although I felt sorry for her, I did not fully warm to her.

Because of all of the above, I didn’t feel a deep connection with Christine, and yet, the book evoked dread in me. Dread not just for what might happen to her, but dread for what had already happened to her. The book was not just a thriller, but also a meditation on the nature of memory – how it defines us, and how much we depend on it.

Despite the psychological acuity in the writing, or perhaps because of it, I did not enjoy reading the book. In fact, whereas some other readers couldn’t put it down, I found it difficult to pick it back up. There have been psychological thrillers I’ve loved, but the older I get, the harder it becomes for me to read about vulnerable characters in jeopardy. Christine was acutely vulnerable, and reading about her made me feel uneasy to an uncomfortable degree.

Grading this book is tough, because again, I don’t feel that the writing was bad. The prose was better than average and the characterization well done. The characters felt real to me, and although you are a male author, Christine felt authentically female. There was a twist that I didn’t anticipate, and yet, when the truth was revealed, I saw that clues had been there all along.

Still, reading this book was not an enjoyable experience, and I know I will not read it again. C.