I picked up this book after Jane mentioned it in passing in an email with…some sort of positive connotation. I hadn’t read your work before, but whatever it was Jane said, it was enough for me to want to check this book out. Unfortunately, the fact that I can’t remember why the book was recommended (maybe a non-aristocratic hero?) ended up being a problem that extended to the book itself. I read A Bride Unveiled probably three weeks ago. That’s not that long ago, but I had to look up the blurb on Amazon to remind myself of which book it was, because in thinking about it, I drew a total blank. I’m pretty sure I was drawing a total blank on it three days after finishing it, never mind three weeks. 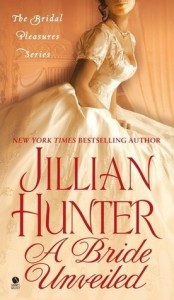 Violet Knowlton meets Kit Fenton in the small village of Monk’s Huntley when she is 13 and he is not much older. She is the respectable ward of her respectable uncle and aunt, a baron and baronness; Kit is a ward of the nearby poorhouse, one who sneaks out during the day to get away and practice imaginary swordplay. Violet has a vivid imagination and two rather milquetoast play companions, Eldbert and Ambrose. She also has a lax governess, who is only a few years older than Violet and is more interested in pursuing her own romance with a local lad. All of these circumstances conspire to bring Violet and Kit together for a summer of fairly innocent gallivanting and childish adventure. The only notable negative consequence occurs when Violet catches the measles from Kit, an episode that reveals her involvement with the unsuitable boy to her overprotective aunt. Their idyll is about to come to an end, anyway, as Kit has been hired out by the workhouse to an ex-military man who lives in the village, an alcoholic in mourning for his lost son. Kit is apprehensive about what to expect from his new master and both he and Violet are sad about parting. They vow to meet again along with their friends Eldbert and Ambrose 10 years in the future.

Fast forward a decade – Violet is at a London soiree in the company of her recently widowed aunt and her social-climbing fiance, Sir Godfrey Maitland. Violet is not particularly fond of Godfrey, but she feels an obligation to her aunt to marry and be settled. The party is to include a fencing demonstration from London’s premier fencing master, whom Godfrey is a student of. Of course, the fencing master is none other than Christopher Fenton, also known as Kit.

In their first encounter the two do not quite recognize each other, a device I was worried would play out for far too long. Happily, that was not the case, and they do privately acknowledge their recognition of each other and share a tension-filled dance after the fencing demonstration.

A Bride Unveiled is (sort of) a love at first sight book – Kit and Violet do not have romantic feelings for each other as adolescents, though they are quite close. But as soon as they see each other again in London, both fall hard. I’m not a huge fan of love at first sight, as it seems to require more emphasis on external conflict (I prefer internal). Also, as a concept, it’s just not something I really believe in; it seems much more honest to acknowledge it as lust at first sight.

Violet is greatly attracted to Kit, and her annoying fiance suffers in comparison. But she’s also equally concerned – almost obsessed – with the fear that her previous connection to Kit will be discovered by the ton. Kit is just as worried; he doesn’t want to damage Violet’s reputation by admitting a past acquaintance with her. I wasn’t sure I believed that this would be the big honking deal they were making it out to be. I mean, Kit was the toast of the town. Yes, his origins were murky and could be assumed to be unrefined, but it’s not like he and Violet had eloped previously – they had been rather innocent friends who had not even been alone together (the other boys were always there) ten years previously. Maybe it would’ve made a bit more sense if Violet had been very high-born, perhaps the daughter of a duke. But she was the niece of a baronness by marriage, and there was no indication that her antecedents were particularly distinguished beyond that.

This was just one of the details that felt a little off to me. I was surprised by the location of a poorhouse in the rural setting of Monk’s Huntley. I may be entirely in the wrong, but I thought poorhouses were a London phenomenon. I also thought the way the fencing craze was depicted was a little exaggerated, with Kit gaining acclaim both as a teacher (to some fairly tony aristocrats – one whom he becomes friendly with is a duke) and an arranger of and participant in fencing demonstrations and entertainments. This also may have been accurate, for all I know. None of it rang true for me, though, which is a big sign that an author has lost me – lost my interest, my suspension of disbelief. The more conscious I am that it’s a story I’m reading, with an author behind it who may or may not be making up details and manipulating events, the less I like it.

I’m aware that this is the sort of thinking authors hate – the “it may or may not have been accurate but it didn’t feel accurate” argument. But again, my point is that it’s more a symptom of a larger problem than a problem in and of itself. I’ve enjoyed books where I knew the events were quite unlikely, because those books had other things going for them. If I can be distracted into wondering if there were really poorhouses in close proximity to small rural villages, it’s because I’m not involved in the story.

Kit was okay – I would’ve liked a little more insight into his background, but he was an adequate hero. Violet was okay. The writing was okay. I’m sensing a theme here. There is a villain whose identity is shrouded in a cunning little bit of misdirection – I thought I was being clever in guessing who I thought it to be, until it became clear that I was supposed to think that. I liked that, but the ultimate identity and motivation of the villain then ends up being random and unconnected to anything that’s come before. I didn’t like that at all. Ultimately, though, I found that not a lot about A Bride Unveiled moved me either way. My grade is a C.