Readers of your Guild Hunter series were first introduced to the vampire Janvier and guild hunter Ashwini Taj in the novella Angels’ Pawn (2009). Now comes Archangel’s Shadows, the first full-length novel about Ashwini and Janvier. 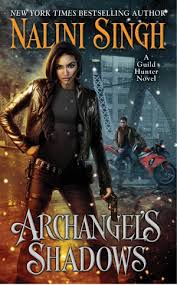 In this book, Janvier and Ashwini are tasked with catching the killer of a girl found in a dumpster, her body dessicated, brittle, and bearing brutal bite marks. It’s unclear who or what could have killed this girl, because although the body is reminiscent of some of the evil Archangel Lijuan’s handiwork, Lijuan was damaged badly enough in a recent battle to presently be regenerating.

Meanwhile, a new drug called Umber has hit the streets, one with a potent and possibly dangerous effect on vampires. Is the drug connected to the death of the girl, or are these events independent?

Investigating the case brings Ashwini and Janvier into close proximity for the first time since the aftermath of the battle to hold New York, in which Ashwini was gravely injured. Janvier realized then how much he loves her and how vulnerable her mortality makes him feel, and now he wants nothing more than for his “Ashblade” to be made into a vampire.

Ash, though, has reasons for resisting, reasons Janvier knows nothing about. While she realizes she loves him, she feels she’s done him a great wrong by allowing him to love her back without confessing her secret to him. But can she bring herself to do so, knowing it might cause him to pity her?

Meanwhile, on other fronts we have Elena planning a block party which the Archangel Titus wants to attend. The enigmatic Legion needs better quarters, Naasir has decided to give Elena a mysterious gift, Illium is growing in power while Aodhan is slowly healing, and Ransom and Nyree are moving along. Caliane misses Raphael, and there is lots more I have not mentioned so as not to spoil the pleasures of this book for readers.

Kudos for writing a South Asian heroine in Ashwini (and to Berkley for putting her on the cover)– . I’ve liked Ash since Angels’ Pawn and I’ve liked her even more here. She is strong, resourceful and valiant.

One thing I did wish was that I’d liked her secret better—I didn’t love every aspect of how the issue was explored and I didn’t fully buy into the reasons she resisted trying immortality—but I liked her backstory of how heroically she’d dealt with that secret as a fifteen year old.

I also like Janvier a lot, most especially for his charm and his sense of humor. Although he had nothing to angst over (refreshing in itself), he had an interesting backstory too. Of all the male immortals in this series, he feels the most human and mortal to me. While he can be dangerous when he needs to, Janvier doesn’t exude danger, violence, or possessiveness and in that sense he too was a breath of fresh air.

Perhaps I should have reread Angels’ Pawn (not a favorite of mine among the novellas in this series) before embarking on Archangel’s Shadows, because by the time this book begins Janvier and Ashwini already know they love each other. What’s keeping them apart is Ashwini’s secret, but for the most part, the courtship is already over here and I regretted that.

I think it’s a compliment to your visceral writing that I’ve become used to being deeply moved by the romantic storylines in your books. It’s not at all unusual for me to cry, as I did late in this book when Ashwini tried to talk Janvier out of something he wanted to do.

Yet I wished I had felt this kind of poignancy earlier. For most of the romance part of the book, and even after Ash revealed to Janvier the secret that could separate them, I wasn’t as moved as I wanted to be. In thinking about why, I think it may be because there was so a lot going on in this book that was outside the romance.

This was partly the case because the mystery elements didn’t feel as integral to the romantic relationship as in some of the previous books. For example in Angels’ Blood, Elena’s hunt for Uram facilitated Raphael’s discovery of the woman she was and of his own capacity to love her for eternity, while in Archangel’s Blade Dmitri’s hunt for the people who’d hurt Honor helped the two get to know each other and revealed to them the depths of Dmitri’s unspoken feelings for Honor.

Here in Archangel’s Shadows, although there were attempts to thread some connection between the romance and the mystery, the two elements didn’t feel as closely tied, and as a result the book didn’t feel as cohesive or as romantic as earlier ones. The Ashwini/Janvier romance felt like as subplot in an urban fantasy novel, rather than like the main plot in a paranormal romance with urban fantasy elements, but I hadn’t been prepared to approach it that way.

It didn’t help that we had a lot of scenes focusing on other characters—Raphael and Elena, Dmitri and Honor, Illium and Aodhan, Titus and Caliane, even Keir and the recovering angels in the infirmary, the Legion, but most especially, Naasir, whose introduction felt a bit shoehorned into this book because we’d heard so little about him in earlier books yet here his sequel-baiting was prominent.

Naasir is an interesting character, direct and even sweet, but I have mixed feelings about his characterization. He’s fascinating, but he says (truthfully, it would seem) that he only eats people if he dislikes them. I’ll say with equal candor that I’m not ready for a cannibalistic or (since we don’t yet know his species) near-cannibalistic hero, even in this subgenre.

Another, more minor issue for me was that the scope of Ashwini’s powers kept changing. At first it seemed Ashwini’s gift was touch-related, that she could read memories of people she touched, and sometimes, from walls in buildings. Later it seemed she could occasionally sense things from some even without touching them. By the end of the book, her abilities extended even further.

She could even communicate with a restless ghost and via telepathy with Janvier.

I liked that the murdered girl, Felicity, although dead, played an important enough role in the story that she became a character in her own right. This made me feel invested in Ashwini and Janvier’s investigation of her death and by the end, Felicity had become so real to me that I wanted a funeral scene for her at the end of the book, so I could see her being laid to rest. Although we didn’t get that, we got the sense that the Tower was beginning to care about impoverished people in the city, and I appreciated that.

Something I almost always enjoy in the Guild Hunter books, even those I don’t love, is how quickly I come to care about minor characters, like the father and son who found Felicity’s body and reported her death to the Tower. A character can be on page for just a couple of pages and still touch my heart, and that was the case with these two, and with others.

Another thing I was appreciative of was that one or two of the minor characters I’d come to care about in the course of this book ended up dead. I complained about the lack of deaths in Archangel’s Legion and I feel the deaths here, although very sad, made the danger presented by Felicity’s killer feel very real and more personal.

Overall, while Archangel’s Shadows was not my favorite Guild Hunter book (mainly because I wanted more romance and courtship), it is still a good read. C+.