REVIEW: 99 Percent Mine by Sally Thorne 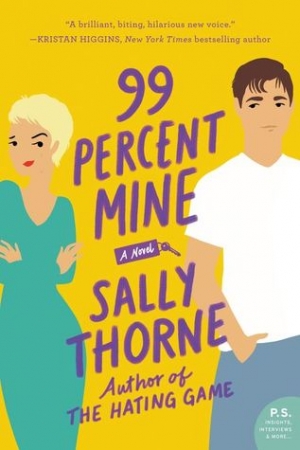 Well, I’ve now finished the book but I can’t say my thoughts are much clearer. It’s very possible I’m an outlier so make of this review what you will.

There were things I liked, things I didn’t like and things which confused me. In the end, 99 Percent Mine was a mixed bag and I’m not quite sure how I feel about it.

Darcy Barrett has had a crush on her neighbour and brother’s best friend, Tom Valeska, since they met when she was eight years old. It is almost her raison d’etre and it terrifies her at the same time. Darcy and her twin brother Jamie “shared” Tom as children but Tom was mainly Jamie’s friend. Darcy often felt on the periphery. She was born with a heart arrhythmia and cannot do strenuous activities. She was left out of various family activities as a child and Tom took her place within the family for those trips. It is a curious relationship the twins and Tom have. There seem to be many potential causes for resentment but they were mostly not addressed. Darcy blames her dodgy heart and thinks of herself as being a bother and an inconvenience rather than being resentful her family took off without her for fun trips she couldn’t join in with.

Darcy spent a lot of time with her grandmother, Loretta, when the others were off doing things. As a result, they were very close. Now, Loretta has died. She left her cottage jointly to Darcy and Jamie with strict instructions that it be restored and sold. Tom, a builder, is going to do the renovation.

Darcy was originally not going to stick around for the reno. When she was 18, Tom first told her he loved her and in fear and confusion, she went to Loretta who advised her to take off overseas. If I read it right, Loretta was telling Darcy that she would only hurt Tom and needed to stay away from him.  So Tom was hurt and Darcy traveled for months at a time.  When Darcy and Tom came into each other’s orbit they were very careful around one another, not getting too close or saying too much. After finding out Tom was engaged to Megan (a woman introduced to him by Jamie, no less). Darcy couldn’t bear that Tom was forever lost to her. She stayed away for even longer periods and cut herself off from her family in many ways.

However, when Tom turns up ready to start knocking down walls and fixing the roof, Darcy decides to stay and help. I did understand that the renovation was a metaphor for the various relationships between Tom, Darcy and Jamie.

Over the course of the book, Darcy and Tom dance around each other and their feelings. Darcy’s relationship with Jamie, already strained after a disagreement about what to do with Loretta’s house (it is fair to say Darcy has far more attachment to it than Jamie does) comes under further fire as Jamie (appears to be) protective of Tom and warns her away from him. I struggled to get a handle on the dynamic between the three of them. Just when I thought I had it, something would come up which would call my thinking into question.

I confess I have yet to read The Hating Game, despite that I have it in paper, digital and audio format. I didn’t go into this book with any particular expectations; not having read the earlier book (yet) there was nothing for this novel to live up to.  So I know my feelings about 99 Percent Mine are about this book alone. The first 20-30% was great. I liked the writing voice, it drew me in and I started to settle in for what promised to be a fabulous read. There were some wonderful descriptive phrases which resonated for me.

I can never decide if Tom’s hair is the color of caramel fudge or chocolate. Either way, yum. The texture is like a romance novel that’s fallen into the bath, then dried: vaguely sexual crinkle waves with the occasional curled edge and dog-ear. I want to jam my hand in it and make a gentle fist.

When Tom is first introduced into the story, Darcy believes him to be engaged to Megan but that isn’t the case any longer.

If I were Megan, I would fuck me up for sitting close enough to smell the scent on his skin. He smells like birthday-candle wishes. I’ve never in my life felt even a passing possessiveness for another man, but Tom Valeska? It’s something I have to keep lashed down inside me, hard and tight, because I have no right to it.

He doesn’t wish to tell Darcy they broke up. Because… I’m not entirely sure. The dynamic between Tom and Darcy confused me. They clearly love one another, albeit not necessarily in healthy ways. Darcy makes a kind of game of getting in his face about how much she wants him but she doesn’t believe he could ever be hers not really (at least I think that’s what was going on) and Tom thinks Darcy is destined to leave because that’s what she always does and (I think) he’d rather not start anything because losing her would be even more unbearable than never having her. Perhaps.

But Darcy’s treatment of Tom started to bother me. She seemed to be playing games with his feelings and even through her first person narration of the story, I felt Tom’s baffled pain. Darcy tells the reader that her crush is a secret but everybody knows how she feels. Everybody. It’s basically tattooed on her forehead.

“You know exactly what you do. You mess around with me.”

“Well, what is it like being messed with by me?” I can’t stop looking at how his short, neat fingernails are pressing into the cotton at his hip. I’m sweating now. I need to press my sleeve to my brow, but he’ll see.

“Being messed with by Darcy Barrett?” He considers the question. “It sounds like she’s joking with me, but it feels like she’s telling the truth. And I never know which is right.”

Whoa. He really has my number. “You’re a smart guy, you’ll work it out.”

He puts a hand into his hair. That bicep. Those lines. He’s art. “See, you’re doing it again. It’s your technique to put me off track, so you won’t have to actually answer me.”

He turns back to the house like he’s looking for its moral support. Patty obliges, running to him and standing up on his shin. He looks down at her. “I’m just a chew toy, Patty. Aunt Darcy likes hearing me squeak.”

It began to feel cruel and it made me uncomfortable. He’d ask her to stop and she’d promise she would and then she’d do it again.

And, as I had those feelings, I began to feel less than warm toward Darcy. Given the entire book is from her POV, my reading enjoyment tanked a bit. I took a break midway into the book and read something else as a bit of a palate cleanser. When I came back to it a few days later, I felt less grumpy about things and more able to be optimistic as to what might happen next.

Even so, I flip-flopped with how I felt about the novel. There were times I didn’t like Darcy at all (although by the end my feelings for her were generally benevolent). There were times I didn’t like Loretta much. Or Jamie. And Tom and Darcy often confused me. I think maybe Tom was doing a bit of a martyr act at times (which does nothing for me to be honest, but I often didn’t understand why he did what he did so I could be wrong there.) But then there were moments of delight as well. Moments of connection and rightness that I very much enjoyed.

“Your obsession with lace has destroyed my sanity. Do you know that your bra is always visible, no matter what you wear? It’s like your clothes don’t really want to be clothes.” He gives me a kiss on my neck that gives way to a suck and a bite. “You’re like a self-peeling banana.”

And even when the story and characters frustrated me the book was eminently readable.

In the end, I’m not sure exactly what the book was trying to be. It didn’t feel entirely coherent. There was a lot going on but it didn’t quite come together. I’m not good at subtext so maybe there was some I just didn’t get. I’d have said that this book isn’t big on subtlety but maybe it was there but just too subtle for me? I didn’t hate it. I didn’t love it. Mostly I feel like I need someone to sit down and explain it to me because I feel sure I missed something.

→ Kaetrin
Previous article: REVIEW: Dreyer’s English by Benjamin Dreyer
Next Post: REVIEW: Here and Now and Then by Mike Chen