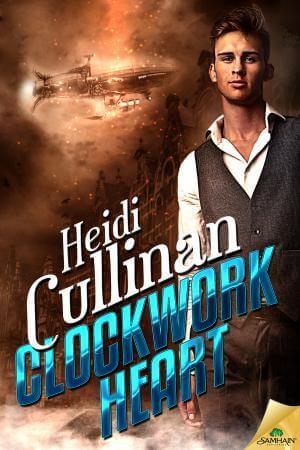 As the French army leader’s bastard son, Cornelius Stevens enjoys a great deal of latitude. But when he saves an enemy soldier using clockwork parts, he’s well aware he risks hanging for treason. That doesn’t worry him half as much, however, as the realization he’s falling for his patient.

Johann Berger never expected to survive his regiment’s suicide attack on Calais, much less wake up with mechanical parts. To avoid discovery, he’s forced to hide in plain sight as Cornelius’s lover—a role Johann finds himself taking to surprisingly well.

When a threat is made on Cornelius’s life, Johann learns the secret of the device implanted in his chest—a mythical weapon both warring countries would kill to obtain. Caught up in a political frenzy, in league with pirates, dodging rogue spies, mobsters and princesses with deadly parasols, Cornelius and Johann have no time to contemplate how they ended up in this mess. All they know is, the only way out is together—or not at all.

Warning: Contains tinkers, excessive clockwork appendages, and a cloud-sweeping tour of Europe. A little absinthe, a little theft, a little exhibitionism. Men who love men, women who love women, and some who aren’t particular.

Dear Heidi Cullinan, I bought this book because *steampunk* and I really enjoy steampunk settings. It is not a guarantee that I will enjoy the book, but it is definitely a big point in its favor. I wrote and rewrote an explanation of why I did not buy the setting of the story several times, but I deleted it because I could not make it clear enough for readers. I will say, however, that the steampunk part of the book was the most enjoyable aspect for me.

First and foremost, the author’s note at the beginning of the story set the wrong tone for me. I understand that the author wanted to orient the reader in the novel’s time and space and explain how this setting is different from the real, historical one. I get that. However, my brain started asking questions about how and why one event in the note led to another, and why a certain scenario is the one that occurred and not a different one.

For example, the note tells you that there is a war taking place, and that in this universe France did not invade Russia and did not lose Waterloo. Apparently that difference leads, to France being a much stronger player on European political arena alongside Britain and Austria, and France is pretty much at war with Austria almost all the time. This is the war which is described in the blurb.

So I had many question marks next to the first few paragraphs of the note and later on I questioned why this note was even needed, since I did not think the story went into much depth about asking or answering any political questions. I know that this is first and foremost a romance, but if the story promises me an interesting setting, then I want the setting to come alive, darn it.

I also felt that even though the book is a historical fantasy (the note calls it a tale of “alternate history” but as we know alternate history is a fantasy by definition, even before we get to the existence of clockwork inventions as more evidence of the book being fantasy), the world-building lacked internal consistency. I felt that anything and everything could pop out at me from the pages of the book and in this case I did not think that was a good thing.

What about romance, you ask? Sadly, I thought the romance was also not very engaging to me as a reader. I liked the guys a lot, and I thought *moments* between them when they connected were lovely, but for the most part I had no idea what they saw in each other. I mean, yes, Connie (Cornelius) saved Johann’s life. I can easily buy such a huge event as the beginning of a love story, and their first brief conversation when Johann was scared that he would die was emotional and powerful to me.

“Cornelius threaded their fingers together.

“I’m so sorry this has happened to you. This is wrong. This war is wrong, this barge is wrong – you shouldn’t be here if you’re alive. You should be at a prisoner-of-war camp and you should be accorded respect.” He swallowed a bubble of bitterness. “You should be at home. If you came to Calais, it should be for a holiday.”

The man opened his good eye and gazed at Cornelius through a haze of pain. Though he spoke in German, no translation was necessary for the look on the soldier’s face.

I’m going to die and I am afraid.

Cornelius drew the man’s hand to his mouth and kissed the bloody, dirty knuckles.

“You aren’t going to die. I’m going to save your life.”

And then what happens after Cornelius has saved his life? The weeks fly by and we get a *summary* of their interactions.

“For the first few weeks, the two of them existed in a quiet, charmed bubble. Cornelius kept Johann in his rooms and by and large Johann mostly slept in between Cornelius’s attempts to teach him how to manage his clockwork. To help those efforts along, Cornelius also taught Johann rudimentary French”.

I needed more of those moments to fully buy into their connection, and skipping ahead in the timeline occurred a couple more times, I believe.

Granted, they are participating in an adventure, whether they wanted or not, and they became part of the war that was taking place, but could not they be shown actually doing things together even if they did not have time to talk much?

I think Johann’s character is the main reason why it was not successful. Before he met Cornelius he had never slept with men, and he never knew about kinky sex of any kind, so I thought it was not believable how fast Johann adopted the kink. Now, the actual timeline may have been slower than I thought it was, but with some skips in the narrative it felt pretty fast. More importantly, in Heidi Cullinan’s other books I never doubted why *both* guys want kinky sex. The impression I got from this one is that the only reason Johann wanted it was to make his lover happy – and for me this is just not enough.