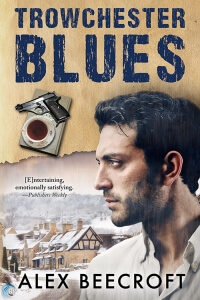 Michael May is losing it. Long ago, he joined the Metropolitan Police to escape his father’s tyranny and protect people like himself. Now his father is dead, and he’s been fired for punching a suspect. Afraid of his own rage, he returns to Trowchester—and to his childhood home, with all its old fears and memories. When he meets a charming, bohemian bookshop owner who seems to like him, he clings tight.

Fintan Hulme is an honest man now. Five years ago, he retired from his work as a high class London fence and opened a bookshop. Then an old client brings him a stolen book too precious to turn away, and suddenly he’s dealing with arson and kidnapping, to say nothing of all the lies he has to tell his friends. Falling in love with an ex-cop with anger management issues is the last thing he should be doing. Finn thinks Michael is incredibly sexy. Michael knows Finn is the only thing that still makes him smile. But in a relationship where cops and robbers are natural enemies, that might not be enough to save them. (NOTE: The Trowchester Blues novels are stand-alone titles that can be read in any order.) Word count: 77,300; page count: 273

I was hesitant about trying this series, but I am glad I have read this one.

The blurb gives you the setup of the story. The only thing I will add that Michael was not merely “punching a suspect.” He punched the “alleged” murderer of a fourteen year old girl, whose body he and his partner found and had to look at. It is *never* presented as the right thing to do, and I do not want readers who might share my tastes to think of Michael as doing the same things as those real life cops who engage in police brutality.  Obviously every reader will have their own reaction to the text and character – I am just saying that I never thought of Michael as a bad guy, and police brutality can make me despise the character and fast.

Michael realizes that his rage over unresolved issues with his father, over not being able to protect a lot of innocents like that girl, have spilled over into his work, and he cannot be a policeman anymore. His boss finds a way to let him resign honorably, and Michael goes to live in the town of Trowchester where his father left him a house, an inheritance of sorts. Michael is not in the best of spirits during his journey, but I thought he had at least a tiny hope of starting over in Trowchester. His father was an abusive piece of shit even if Michael claims that he never hit him and his mother, so of course his childhood influenced Michael a lot. As blurb stated he became policeman because he wanted to protect other innocents from abuse.

“Michael was all gentleness again by the time he looked back. A big, gentle puppy of a guy. “’Neglect,’ I guess,” he said slowly. “Or, I don’t know. What would you call a cat that played with its prey but never actually harmed it? That was what he was like, my dad. You could hardly call it abuse. He was just having fun, lying, jerking you around, you know? I mean, yes, he had a temper, but he never hit us or anything. I always think I’m remembering it worse than it was, but then I go back there and I can’t breathe.”

Soon after he comes to Trowchester he meets Finn, a bookstore owner and former occasional seller of the stolen antiques. Finn came to the town hoping to become an honest man after his partner died from a heart attack five years ago.

When Michael steps into Finn’s shop they are attracted to each other pretty fast and Finn does some flirting and even takes Michael out on a date.  I loved this visual when they go out.

“This is…um.  A bit genteel for me.” Michael looked up at the Mermaid Tea Rooms as Cinderella in her rags must have looked at the ball. Finn suppressed a smile and wondered what exactly it was that the man found intimidating.

The river had been widened here into a basin in which the boats could moor up and turn around. In harmony, the towpath had also spread out into a little paved plaza lined with pubs, an independent cinema, a neatly kept stand of public toilets and an avant-garde statue of what Finn believed was a crayfish made out of fibre optics, which was subtly coloured in the daytime but unpleasantly garish at night.

The tea shop on the south of the plaza, by contrast, was a study in how to do English countryside right. Its white-and-yellow façade was half-obscured by climbing roses. Its window boxes trailed verbena almost to the ground, and its door had the perfect balance of aged, peeling paint and bright door knocker. The door stood open on two large rooms where half a dozen tables were visible, draped in white tablecloths and centred with flowers.”

When they learn that Michael was an ex-cop and Finn was a fence, they think that maybe they should stay away from each other, but they cannot.  And honestly I was not bothered at all – Michael *is* an ex – cop, so it is not like anything prevented him from starting a romance with anybody he wanted and Finn was just afraid of complications.

Of course if one is thinking of the complications that may arise, then they are going to come running. Finn’s past comes back to haunt him and since Michael being an ex-cop he has ideas about how to help Finn deal with it, which Finn may not necessarily like.  I really liked that Michael acted the way I expected him to act based on how he was portrayed throughout the story. His actions made sense, Finn’s actions made sense and while they may have been upset with each other, they dealt with complications as grown – ups do.

“And Finn hated him – hated that he cared about him too much to bear to watch him suffer like this. It wasn’t fair. It wasn’t fair that he had to be the magnanimous one, but if it came down to a choice between forgiving Michael or driving him away by doing this to him, forgiveness didn’t seem so hard.”

I also liked that there were several times in the story when the characters seemed on the edge of breaking up, and one time they almost did, but instead they seem to empathize with each other, even while they were not thinking the best things about each other.

Now that I am thinking about it, I realize I would have expected this from a couple who had been together longer, for years, not weeks. But these were guys who had had their share of pain and heartbreak, and maybe they had learned to treasure human being with whom they thought they could have a long relationship? I’m not sure. I am hardly in a position to complain, because so many m/m books instead go for misunderstandings and stupid breakups which make no sense to me, so I liked seeing something different in this one.

I thought that Michael and Finn took turns saving each other throughout the book. At first Finn helped Michael to start dealing with his past and then Michael did the same for him, the only way he knew how.