REVIEW: Too Many Fairy Princes by Alex Beecroft 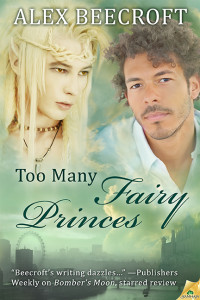 Happily ever after doesn’t always come quietly. Sometimes it puts up a fight.

Kjartan’s family is royally dysfunctional. He’d prefer to ignore the lot of them, but can’t since his father has set him and his brothers on a quest to win a throne Kjartan doesn’t even want. Worse, his younger brother resorts to murder and forces Kjartan to teleport—without looking where he’s going.

Art gallery worker Joel Wilson’s day has gone from hopeless, to hopeful, then straight to hell. One minute he’s sure his boss has found a way to save the floundering business, the next he’s scrambling to sell everything to pay off a loan shark. If anyone needs a fairy godmother right now, it’s Joel. What he gets is a fugitive elven prince in a trash bin.

They’ll both have to make the best of it, because fairy tales run roughshod over reluctant heroes. Particularly when there aren’t enough happy endings to go around.

Based on the blurb this story seemed to be inspired by fairy tales, and I love fairy tales
and their retellings for adults, so of course I wanted to review this book.

As the blurb indicates, Joel and Kjairtan meet in Joel’s world (“our” world). Kjairtan
(Kai) has teleported himself there in order to avoid being killed by his brother, and Joel is
having troubles of his own. His boss was supposedly hit by a car, but he then disappeared
with a bagful of money. Joel thought the money was going to be used to save the gallery
he works in, but some mobsters have other ideas, expecting it as repayment for a loan
they are owed. Now the mobsters are after Joel and he has his hands full trying to find the
money. In the midst of this, at a most fortunate (or unfortunate, depending on how you
look at it) moment, Kai shows up.

The hilarity of both of them assessing each other and trying to adjust their assessments
was amusing, as it always is when beings from the different worlds learn about each
other. Kai knows that humans exist, but he has a lot of preconceptions about them. Joel
knows nothing about elves’ existence, but apparently he’s a Tolkien fan, so in no time at
all he comes to accept that Tolkien elves exist in reality. As an aside, I was a little
annoyed at first because I wanted the writer to bring her own touch and come up with
more original characterization of elves than just telling me that Joel sees a creature from
Tolkien’s worlds come alive. My annoyance soon disappeared , though, because I
realized that one – Joel may not *know* any other elves and has nothing to compare his
impression but with Tolkien and two – the author showed me an interesting and not quite
Tolkien-like characterization of her elves.
I thought their interactions were beautiful.

“He picked up a pectoral pendant the size of his fist, on which a solitary humanoid figure was battling what looked like Cthulu. It was light and soft in his hand, molding to his grip. “Um. Okay then.” Putting the jewel back on the table, he turned to find Kai only a step away, watching his moment of revelation with bright-eyed pleasure.
“Can I…um…I’d like to…” Joel closed the distance and slowly, waiting for a denial that didn’t come, curled his hand around the back of Kai’s neck and pulled him in for a brief, gentle kiss. When he let go, Kai’s eyes were shut and his ice-white mouth was smiling and faintly tingled with pink.
“Are you aware how rarely you finish a complete sentence?”
Joel blushed, delighted by the sweetness and the ease of the moment. [snip of the sentence for spoiler reasons]. This, though Kai was a far greater danger in real terms, made him feel cherished. Secure. “I can’t help it if you leave me speechless”.

I enjoyed the writing, but as you may see from the sample (or not) it is very descriptive, so definitely check out the publisher’s sample. Her style is one of many that I enjoy, but you may find that it is *too* descriptive for your liking.

The writing made me temporarily forget as to how fast their mutual attraction flared up,
but when I finished the book I came back to the Insta!Part of their Love and was not
happy about it. I think the reason I was not happy is because while we see constant fairy
tales undertones in the story (the Quest the King sent his sons on, the constant refrain that
the youngest son always wins, etc.), the depictions of the main characters are deeper than
what we often see in fairy tales, where the characters are frequently archetypes and the
Quest is the main point of the story.

In the “pure” fairy tale I would have much more tolerance for this kind of instant
attraction. I do realize that it occurs partially because the story is a novella – I have read
several novels by Alex Beecroft and know very well that she can write slow-burning love
stories to perfection. It is not the worst variety of Insta!Love by any means, and as I said
above, when I was reading the story the writing completely swept me away – it is when I
started thinking about it that the relative dissatisfaction came.

I really appreciated how very *unpleasant* a lot of Kai’s fellow elves felt to me. This is
not the first story I have read with elves not being all sweetness and divine light, but I
would still say that the majority of fantasy stories portray them in a positive. What I
appreciated the most is Kai’s characterization. He is a gentle soul overall, but he certainly
absorbed a lot of teachings of his world and even at the end of the story when Joel asks
him not to do certain things, he agrees because he loves Joel rather than because he thinks
Joel’s way of doing things is better. In other words, there was a lot in his character I
could relate to as sympathetic, decent and likeable, but there was always something in
him that felt alien to me and I really liked that. I liked that he felt like being from another
world, rather than just looking like one.

Joel seemed more like a White Knight type of guy to everybody around him, but even he
accepted some less than savory things being done for the greater good. I liked that too. I
liked how he felt more like an ordinary guy in the extraordinary situation rather than
Superman. But the battles scenes were very cool.

There was a certain plot point in the storyline that seemed like too great of a coincidence.
To avoid spoilers, I will just say that who the mobster who was after Joel turned out
to be bothered me. I mean, I accepted it for the sake of the story, but I found it jarring.
I would certainly read more about these guys and about this world.
Grade: B-/B

→ Sirius
Previous article: Friday News: I have a candy hangover!
Next Post: 63. Stopping, Buying, New Genres, and What We’re Reading