REVIEW: The Girl with the Dragon Tattoo by Stieg Larsson

My husband and I have lately been reading to each other in lieu of watching television. Recently we finished The Girl with the Dragon Tattoo. Yes, I'm aware that I’m the last person on Planet Earth to read this book but I thought that it might be worth reviewing regardless. 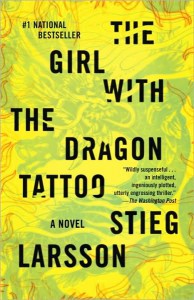 The Girl with the Dragon Tattoo, for those few who don't know, takes place in Sweden around 2003. Mikael Blomkvist, one of the book's two protagonists, is an investigative journalist who, early on in the story, is found guilty of libel for an article he wrote about a financier named Wennerstrom. As a result, Blomkvist is sentenced to three months in jail and a hefty fine, as well as forced to resign from Millennium, the magazine he founded with his friend and lover, Erika Berger.

Soon afterwards, Blomkvist is contacted by Dirch Frode, an attorney representing a mysterious client with an even more mysterious job offer for Blomkvist. Frode reveals that his client is elderly and infirm, and cannot travel to Stockholm, so Blomkvist will have to come to Hedestad to meet with him and hear about the job offer in person. On learning that he client is none other than Henrik Vanger, a former "captain of industry" who once headed the Vanger Corporation, Blomkvist is intrigued despite himself.

Eventually, Blomkvist agrees to meet with Vanger, and learns that Vanger wants him to, under the guise of writing a biography of the Vanger family, investigate the disappearance of Vanger's niece, Harriet, nearly four decades before.

Harriet disappeared in 1966 at age sixteen, during a family reunion. Since the family was gathered on Hedeby island and the bridge to the mainland was closed due to an accident when Harriet vanished, Vanger believes that Harriet was murdered. Not only that, he is convinced that it was a member of the family who killed her, and that the same murderer is the person sending him a pressed flower each year on his birthday as Harriet used to do.

Blomkvist is drawn in by the story in spite of his better judgment but not even the small fortune Vanger offers as compensation is enough to get him to accept the job. It's not until Vanger offers him some information on Wennerstrom in exchange for his solving the mystery that Blomkvist agrees to take the job.

The book cuts back and forth between Blomkvist's storyline and that of Lisbeth Salander. Lisbeth is first introduced as the researcher hired by Frode to investigate Blomkvist for Vanger. As she tells Frode, Lisbeth reaches the conclusion, after looking into Blomkvist, that Blomkvist is above board and was set up for his libel conviction somehow.

Lisbeth, the pierced, tattooed girl of the title, is an intriguing character. Bright, fierce and antisocial, she might at first glance, owing to her slender frame and her non-communicativeness, seem like easy prey, but she does not hesitate to defend herself when the need arises, as it does in this book. Lisbeth does not trust many people, and there appears to be some trauma in her past. Not much is said about that in this book, but I suspect more will be revealed in later books – although, since the author passed away before he could finish this series, I don't know how much.

Blomkvist too, is interesting and though not as different as Lisbeth, still somewhat unlike many mystery detectives. For one thing, he has an on again, off again relationship with the married Erika Berger, whose husband knows about the relationship and puts up with it. When Berger is with her husband, Blomkvist sees other women, making no secret of the fact that Erika is part of his life.

While I found Blomkvist and Berger's relationship fascinating (if not exactly romantic), I never fully understood why these two weren’t married or at least living together. They seemed to have a great rapport and to love each other. They couldn’t stay away from one another, to a point where it had broken up Blomkvist's marriage. The explanation that they couldn't get along well when living together was unconvincing to me, since we never saw them living together and since they had a great deal in common.

Blomkvist and Lisbeth's interactions, once they met, captured my attention as well. I really liked the way Larsson switched the traditional gender roles when it came to their personalities, making Lisbeth the strong, silent, unforgiving type, and Blomkvist more gentle, understanding and nurturing. This extended to some of their actions in the major plot turns and even to their attitude toward housework – Blomkvist was neat and Lisbeth a complete slob.

The resolution to the mystery was disappointing to me. Major spoilers hidden below:

[spoiler]First, I thought the concept of two serial killers in the same family wasn’t very credible. The book would not have been nearly as entertaining with just one killer but serial killers are so rare, and as a rule they don’t have children. That aspect of the book seemed really far-fetched.

Second, I was mystified as to why neither Blomkvist nor Lisbeth thought to search out information about the Vanger family members and match their whereabouts on the dates of the women’s deaths to the locations of the murders much sooner — as soon as they learned the identities of the victims.

Third, Blomkvist, taking a page right out of the TSTL romantic suspense heroine handbook, walked right into the villain's house after having identified that person as the villain.

Finally, while I liked learning Harriet's fate at the end, the explanation of why the pressed flowers were sent to Henrik was completely unconvincing.[/spoiler]

In addition to this, some of the events near the end of the book left me feeling that Blomkvist was a Marty Stu (male Mary Sue) in many ways and even Salander was perhaps too gifted, though in her case, her social impediments served to make her more of a mix of talents and impairments and therefore more believable.

The things I like best about The Girl with the Dragon Tattoo were the Swedish setting and the fact that it was a psychological story as well as a mystery. The first clue to the mystery doesn't become evident to Blomkvist until a good part of the way into this 600 page book, so what kept me turning the pages wasn't just the mystery but also the relationships, especially those within the Vanger family and between Blomkvist and the people in his life.

Larsson reveals those relationships gradually, but for all its slow, measured pacing, The Girl with the Dragon Tattoo sucked me in and kept me reading. Despite the aforementioned plot holes, I'm thinking of reading further in this series, and given how rarely I am drawn into same-protagonist series, it makes me feel that Larsson did something right. B/B+ for The Girl with the Dragon Tattoo.

These books are part of the price war in the UK: Amazon and WH Smith are selling the book for around 2.50 pounds.

→ Janine
Previous article: CoverFail: Why Cartoon Covers Have Been Abandoned
Next Post: REVIEW: Masked by Moonlight by Nancy Gideon