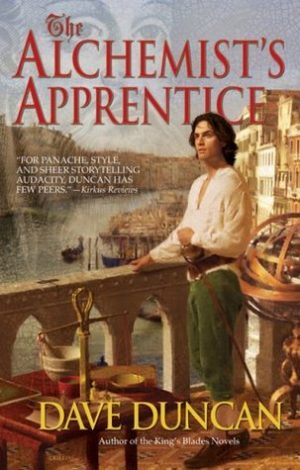 To the legendary clairvoyant Maestro Nostradamus, the future is forever in motion. But for young swordsman Alfeo Zeno, his apprentice and protector, the present is hard enough to contend with. His days are spent poring over astrology charts and making calculations, his nights learning arcane magic or transcribing Nostradamus’s nebulous prophecies. Until one night, when the Council of Ten arrives to take the seer into custody.

It seems that a high-ranking friend of the prince died under mysterious circumstances after Nostradamus cast his horoscope, warning of danger-and rumors are swirling that the mystic poisoned the victim to enhance his own reputation. Alfeo is stunned when his master refuses to flee. Instead, Nostradamus charges Alfeo with the task of clearing his name. Now, Alfeo must unravel a web of magic and murder if he is to have any future of his own.

DA commenter Etv recommended this book and its sequel to me in the comments on my review of one of the books about Archie Goodwin and Nero Wolfe as the duology of the fantasy books which also pay homage to the famous Wolfe and his sidekick Goodwin. It is not surprising at all that I have one clicked those books almost immediately. Overall this was a very enjoyable reading experience, but I did have some niggles.

I am not sure if you never read Wolfe and Goodwin books whether you recognize the homage, but isn’t that always the case? If you have not read the originals you would not recognize the writer who decided to celebrate it in their own work. I thought Dave Duncan did the homage very well – we have the main character who amongst his many talents is a brilliant detective and the narrator who can be very amusing and who is a faithful apprentice and protector of his boss. The main character also has a fantastic cook in his house, but he is at best indifferent to her culinary creations. We even have the red chair.

Obviously, though, Mr. Nostradamus and Alfeo do not live in the America of 30s- 50s – they live in Renaissance era Venice and they are by their main trade an alchemist and his apprentice. Nostradamus does horoscopes, prophecies, things like that and Alfeo is attempting to learn that craft, too, and at times succeeds.

When the killer strikes our main characters are forced to conduct an investigation because otherwise their own lives can become very complicated. I loved every second of the said investigation. It seemed extremely thorough to me and was developing against the backdrop of very well researched Renaissance Venice. In other words what I thought I was holding in my hands was a great historical mystery with the very interesting characters. An aside and not so aside comments about the great city always seemed to be written with authority. Like this:

“Venice is the most beautiful city in the world, a fairyland of islands and canals set in an opalescent lagoon; it boasts a hundred great palaces and as many glorious churches, all of them treasure chests of incomparable art. Curious, is it not, that the people dress mainly in black? Lawyers, doctors, and widows wear black, as do the hordes of priests, nuns, monks, and friars. A nobleman wears a black robe, black bonnets, and a strip of black cloth, a tippet, draped over his left shoulder. Admittedly nobles holding high office bloom in reds and purples and everyone dresses up for Carnival. The only real exception to the prevailing drabness, though, are young men. I cannot afford to dress in the silks and satins of the true aristocrats, but I emerged from my room resplendent in red knee britches, white stockings, a linen shirt with a modest ruff, puffed sleeves, and lace cuffs, a waist-length doublet striped in blue and white, ornamented with acorn-shaped buttons, topped off with a shoulder cape trimmed with squirrel fur and a bonnet like a gigantic blue puffball.”

“Although Florence is a greater weaving center, Venice trades in wool from England and Flanders, cotton from Egypt, silk from Cathay. I knew that Ca’ Orseolo was one of the principal importers of finished fabrics, and I counted ten men unloading bales.”

So, if the book called itself a historical mystery I would have been much happier, but presumably it is a fantasy and I just don’t know about that – I mean even with the main character being an alchemist it felt more like oh this guy is living in Venice and doing whatever suits his fancy. Prophecy, taro cards? By all means, but it seemed that him being a doctor and amateur detective was what he was doing really well.

But then author decided to add *summoning demons* and I had and have no clue as to why we needed to have summoning demons in this book. I mean, it sends the character on the wild goose chase for a little bit, but that’s it and we get a lecture about being careful what questions to ask.

The fantasy element seemed tacked on and I don’t know what purpose it served. I love fantasy books, I enjoyed so many of them , I just did not feel it made much sense in this book.

And another small niggle . Just as Archie has a lover throughout the books, our Alfeo has a lover in this book, too. I thought Alfeo claiming that different aspects of her personality had different names was bizarre. It felt more like she had split personalities and I didn’t think it was the purpose – I thought the purpose was to show how complex the woman was with all the depth in her one personality?

I don’t have any other issues with this book.

→ Sirius
Previous article: REVIEW: A Rogue of One’s Own by Evie Dunmore
Next Post: Open Thread for Readers for September 2021