There are places in the world where darkness rules, where it’s unwise to walk. But there hadn’t been any trouble out at the lake for years, and Sunshine just needed a spot where she could be alone with her thoughts. Vampires never entered her mind. 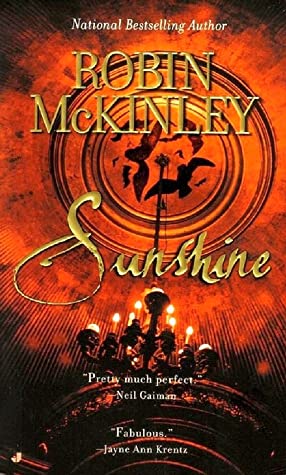 A good friend kept recommending this book. Knowing that I don’t particularly enjoy the vampires (not the vampires per se – I am just squeamish about detailed description of people eating/drinking blood, killing people to drink their blood), I was hesitant for a while, but she told me that those are unusual vampires and her tastes and mine align in 95% of the time, so I dived in.

First and foremost – this is one of those books where I cannot say it enough – check the sample before deciding whether to buy. I am not one of those readers who always check the sample, but in this book it may help a lot. You *have to* like the voice of the main character, and I can absolutely see that her voice may not be to everyone’s liking. I found Rey’s an awesome character and enjoyed her narration, but she does tend to ramble. I found that her rambling only deepens her characterization and characterization of the people around her (we only see through Rey’s eyes and this is a long book), but I can see how opinions may differ on this.

Rey has a bakery in the small town. And her bakery creations made my mouth water. The book does not take long to show that baking is her passion. Charlie is her stepfather who helped her with the bakery.

“Our first customers arrive at six-thirty and they want our Cinnamon Rolls as Big as Your Head and I am the one who makes them. I put the dough on to rise overnight and it is huge and puffy and waiting when I get there at four-thirty. By the time Charlie arrives at six to brew coffee and open the till (and, most of the year, start dragging the outdoor tables down the alley and out to the front), you can smell them baking.”

Rey seems to have a happy small town life. We do learn that this world had been through wars with vampires and a lot of human population had been killed, but it seems like that now they are able to live some kind of peaceful life (if you are on the outside of things anyway).

The blurb does not really give me much to talk about things, so I am going to say that not only Rey has a dangerous encounter with vampires at the lake which is more or less clear from the blurb, but also that she escapes from it because she is able to use some of her abilities very well and because she gets some unexpected help from another person (the help is entirely mutual I can assure you).

Aaaaaand thats pretty much all that I am able to say plot wise . Rey has to deal with a lot of things when she comes back and it is not easy for her (and she still talks non stop, mind you, and even has her sense of humor with her). Here is another example:

“I did notice the difference between the people who were really bothered for me, or for the sake of the society they were paid a salary to keep safe, and the people who wanted to know more because it was like live TV or those cheesy mags with headlines like I ATE MY ALIEN BABY. Fried, with a side salad and a beer. The most serious drawback to the telling-nothing approach is that it made that much more of a mystery of what had happened, and the nature of gossip abhors a vacuum of the unexplained.

This meant that soon everybody “knew” that whatever had happened did indeed involve the Others, because that made a better story. I think they would have liked to assume that it involved the Darkest Others, because that made the best story of all, except that, of course, I was still here, and nobody escaped from vampires. Nobody escaped from vampires. I didn’t know if the everybody who knew this included SOF or not, but I could hardly ask.”

I have to say that this book has 477 pages and mostly it moves *slowly*. There are pages when action speeds up, but mostly it was slow. I usually like the nice balance of fast and slow in my SFF books, but here it is very skewed towards slow in my opinion and it did not bother me at all, it really worked quite well.

If Rey’s narration did not work for me, I would have given it much lower grade, but it did, I thought she was an amazing character. More importantly, as slow as the book mostly was – couple of times it surprised me. Rey’s first revelation came so unexpected that I had to stop and was like, wait, what? Where did this come from? I did not expect that from small town girl who bakes amazing things that she was also able to do other things :). I suppose partially my surprise was also my fault – did I forget that I was reading a fantasy book?

Is there a romance? Well, sure, there are romantic storylines, but Romance? No, not yet, maybe very beginning of it and now probably never continued since the book was out in 2003 and it is now 18 years later I am reading it. The ending does not resolve any romantic storylines at all, in fact I would say it does not resolve anything, but once again it worked for me and I thought it worked for the world and characters.