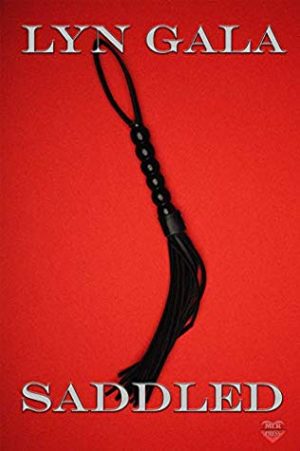 So I was not as surprised by BDSM in this book per se, as I was surprised by rather intense pony play. Now when I reread the blurb (because yeah, I bought the book second after I saw it on Amazon), I realize that I should not have been surprised. The blurb tells you about what kind of play our characters engage in very clearly. I want to be very clear though that while the first very long (in my view) pony play scene was too intense and too much for me, the scene itself was just a part of the problem.

By time I finished I was not happy with the structure of the novel, even if I thought that the characters were amazing. See, pony play notwithstanding, if I were to sum up the plot of this novel, I would say that what we have here is a “Pretty woman” set up and plot with the very realistic characters dealing with very real, scary issues a lot of people unfortunately have to deal with, especially in the US where complicated medical treatment could easily bankrupt people without medical insurance, or just be out of reach in the first place.

So John needs money to help pay for his mother’s experimental cancer treatment. Only one of his brothers has money to help him with it, but John still needs/ wants to contribute. His work now is working for an agency which provides various services, including sexual ones and sexual ones that include some very kinky ones.

The owner of this agency woman named Elena is quite a character, who is absolutely unapologetic for providing some services which are not legal, but she takes care of her employees (assistants) and she has a soft spot for John.

So she is happy to give him extra work, and when a producer Clive Davidson asks for another submissive to engage in pony play, John agrees to take the job because it pays well and never mind that he never actually did pony play before.

And boy they did a lot of playing that weekend and clearly both enjoyed each other’s company.

The events that happen soon after the weekend our guys spend together start unraveling in the interesting and sometime scary way. I really liked them together and separately, but I absolutely had issues with the strong feelings which they developed after spending a weekend together. Oh I totally get Clive’s joy at realizing that their kinks lined up so well together and John’s realizing that this is what he wanted, but it felt as if in the first third of the book the author thought she was writing an erotica only and then decided to transition to romance.

Funnily, once the men decide they do like each other that much , I really enjoyed them on the same page. I liked that they were older – John 46 and Clive 52 (I think). I absolutely loved that both men seemed very self aware. Clive knows that he is a manipulative you know who, even if he was mostly using his powers for good – to take care of the actors and writers who worked on the different projects for him, but he also learns the hard way that sometimes manipulations have unpredicted consequences.

John’s relationship with his siblings and mother, should we say complicated? Talking about John’s flaws is not really possible without revealing more spoilers, but he had some too I thought.

Here to give you some taste of how both men see themselves and each other when they are more familiar with each other:

““You’re still doing it,” John said softly. “Doing what?” “Trying to take care of me.” Clive shrugged. “Yeah, well, I do that. It ruined my marriage and pretty much every other relationship I’ve had. Either I get up in their business outside the bedroom, or I want to control so much in the bedroom that they run screaming in the other direction.

The only people who want my brand of protection are weak. And I’m not attracted to weak. Never have been. Hence the use of prostitutes.” John frowned. Clive was rich and handsome, with a wide streak of ethics. Men and women would line up if he made it clear he was in the market for a relationship. “It can’t be that bad.” “Oh, it is. And it’s hard baked into my personality.” “My brother says that you’re a hardass,” John argued.”

Here is John having conversation with one of his brothers.

““Oh, am I scaring you by talking about feelings?” Logan mocked him. “He’s cute, though. I mean, when people talk about Clive Davidson, they focus on how he can shred a career in six seconds flat. They don’t describe how he gets a lovesick, mushy expression when talking about what a stubborn asshole you are. I can’t believe you found someone with a kink for stubbornness.” John glared at his baby brother.

“One more word, and I am going to describe in explicit and obscene detail every kink Clive and I share. Every single one.” With each word, John leaned closer. He felt cold satisfaction when Logan lost most of the color out of his face. “You wouldn’t,” Logan whispered. John raised his eyebrow.”

So the characters have issues most of which I could relate to in one way or another, and I really appreciated that the author gave me flawed, interesting people to care about and to watch how they found their way out of the complicated situation.

Remember though that I thought that plot did remind me of a “Pretty woman” set up. While I was happy to know that John and Clive were staying together, I thought that the ending kind of diminished the potential .