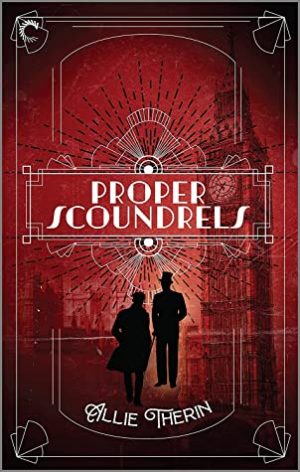 Their scandalous pasts have left them wounded and unworthy—and hopelessly perfect together.

Sebastian de Leon is adjusting to life after three years spent enthralled by blood magic. The atrocities he committed under its control still weigh heavily on his conscience, but when he’s asked to investigate a series of mysterious murders, it feels like an opportunity to make amends. Until he realizes the killer’s next likely target is a man who witnessed Sebastian at his worst—the Viscount Fine.

Lord Fine—known as Wesley to his friends, if he had any—is haunted by ghosts of his own after serving as a British army captain during the Great War. Jaded and untrusting, he’s tempted to turn Sebastian in, but there’s something undeniably captivating about the reformed paranormal, and after Sebastian risks his own life to save Wesley’s, they find common ground.

Seeking sanctuary together at Wesley’s country estate in Yorkshire, the unlikely pair begins to unravel a mystery steeped in legend and folklore, the close quarters emboldening them to see past the other’s trauma to the person worth loving beneath. But with growing targets on their backs, they’ll have to move quickly if they want to catch a killer—and discover whether two wounded souls can help each other heal.

This is a spinoff from the “Magic in Manhattan” series. Two secondary characters from those series – Wesley and Sebastian – find love together. I was not sure if I wanted to give this book a try since the last book of “Magic in Manhattan” was not my favorite book in the series, but decided that I was curious enough to see if the author can redeem Sebastian and was very happy to see that she managed it quite easily without rewriting anything. I hate when the villain is redeemed by rewriting all the bad things they did in the past books.

I think two things helped me to easily buy his redemption. It was made quite clear in the previous books that Sebastian did what he did in the previous books under blood magic. Granted we did not know the details of how it worked and we were not in Sebastian’s head, but I did not doubt that he was forced to do things.

So in this book we do get to be in Sebastian’s head (third person limited POV switches between him and Wesley) and we see how much he regrets and is upset over what he did and how much he wants to help and protect people whom he hurt in the past (and those he did not hurt in the past). I finished the book thinking of Sebastian as a sweetheart, no less.

Wesley had a sharp tongue before and he has sharp tongue now; he is very blunt and always says what he thinks and he is loyal and kind, no matter how grumpy he can be. I thought he and Sebastian had great chemistry together once they dispersed with all the apologies. :)

“No, Sebastian. You don’t owe me penance for anything that happened under blood magic, and you don’t get to say lovely things to me over chips and then expect me to tolerate this slander.” Lord Fine wrapped his hand fully around Sebastian’s wrist, over the tattoo. “This is not your fault. You suffered a terrible torture, and you need to give yourself time.” Sebastian bit his lip. “But I should be past this already. I literally have the magic to weaken other paranormals’ magic. I should be able to break this magic’s hold on me.” “Wouldn’t it be nice if our minds always behaved exactly how we wanted them to?” Lord Fine said dryly. Sebastian huffed. He rolled his eyes, but that had put a small, grudging smile on his lips.”

Their romance had the touches of hurt/comfort for me and I have not read hurt/comfort for quite some time. I like it to a certain degree but I don’t like when it is over the top and over done. I thought the author did it just right (for this reader). Sebastian does not need to be saved all the time, he is certainly no damsel in distress, but there are times he needs help and a shoulder to lean on and because of what he went through it made sense to me. And Sebastian was a shoulder to lean on for Wesley, too! Wesley had past relationship issues as well and Sebastian, I thought, was the right partner for him.

There was a murder investigation they both were involved in, but I thought it was more a suspense than mystery and it worked for me, too. I was kind of glad that relics felt less important in this story than in the original series, since at the end of the original series the relics did not really work for me. The author did not forget about those things, but I thought that way more significance was placed on investigating the murder, although magic was definitely present in this book too.