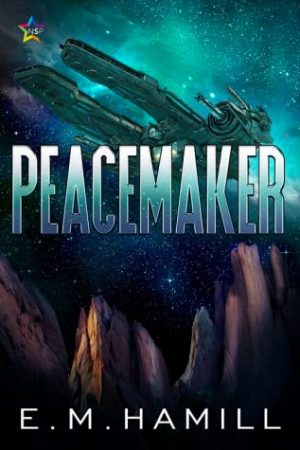 Third-gender operative Dalí Tamareia thought their life as an ambassador ended when they joined a galactic intelligence agency. When they’re yanked out of the field and tapped to negotiate the surrender of deadly bio-engineered warriors who crashed into hostile territory, Dalí is thrust headfirst back into the tumultuous world of galactic diplomacy.

Dalí has faced Shontavians before, but not like these. The stranded mercenaries are highly intelligent and have an agenda of their own. Dalí can’t afford to be distracted from the negotiations by their own demons or the presence of a charming diplomat with a mysterious past.

As a brewing civil war threatens to derail the entire mission, Dali must use all their skills to bring this dangerous situation to a peaceful end—but the Shontavians may not be the biggest monsters at the table. Someone is determined to see Dalí and their team dead before they discover the brutal truth hidden in the wreckage.

I quite enjoyed the first book in this series and reviewed it at DA. When you approached DA with the offer of a “Peacemaker” ARC I decided to wait and purchase my own copy instead and that’s what I did.

I loved that the book started right in the middle of the action, or more precisely in the middle of Dali’s undercover mission. Dali thinks that an unexpected discovery can bring them closer to not only catching bad guys that they were supposed to nail as a result of the mission, but also bring Dali closer to finding the people responsible for the death of their family. Unfortunately (or fortunately) Dali is ordered by their superiors to abort the mission and basically evacuate together with their colleague who was also part of the mission.

The aborting the mission does not go without complications of course, but eventually all is well (I am doing as little spoilers summary as possible here – needless to say all is well is a BIG oversimplification and only relates to this specific moment in time) and Dali is offered the chance to head a complicated diplomatic missions which the blurb described quite well.

While Dali is still grieving (and I would have been surprised if they abandoned their grief that fast), they managed to get themselves (with some help) in a better head space at least where they found some renewed sense of purpose in serving the public again. Dali accepts the mission, but of course before they can begin, a lot of political maneuvering takes place and people who want Dali and their team members to succeed and those who don’t had to come to some compromise (at least the perception was that they did).

Dali is going to the planet where civil war is basically about to begin. They want to do their best, to prevent bloodshed and keep peace, but they realize that they have to concentrate on the problem at hand – hopefully negotiating a peaceful surrender for the Shotavians and leaving other conflicts to the local authorities on the planet to serve.

The story is just as well written as the first book. It was exciting, suspenseful and fun. The author avoided info dumps and reminded us about important things that happened in the first book throughout the story rather than giving a recap in the beginning.

I enjoyed Dali being a smart ass, and I thought that sarcasm applied in small dozes made it even more effective.

““Yes, sir.” I slipped out of the cubicle. He was right. Tired was stupid, and with my patience already sketchy, I might punch Khus in the face and cause a galactic incident. I didn’t give a fuck, but I really shouldn’t embarrass my mother that way.”

In short, I still think that this author can write really well. I was turning the pages on my kindle pretty fast. There is even a chance that romance may eventually develop or not. Dali may have to grieve for a long time, but I can see that signs of affection definitely develop between them and that other person. At the same time Dali just seems to really like sex and is attracted to several other beings during this book so maybe that’s just part of who they are and no romance would ever be in the works.

Another thing I liked about this book is that in the book about politics and inter species conflict the author managed to talk about the issues relating to our reality while at the same time not make it a translation from the issues in our reality. Basically I did not have to read the things happening and think oh, that’s a thinly masked reference to such and such event or such and such politics. It may be influenced by events in real life and of course fiction often is, but it is presented as a universal theme if that makes any sense.

I really had to remain as vague as possible writing this review, but I have to say this. I am dropping the grade from A- to B simply because of the ending. It was deeply unsatisfying to me and not because of romance or absence of such. Dali’s mission ends in such a way (and it is not even a cliffhanger I am not even sure how to call it) that felt as if everything they did in this book was for nothing. Like the rug was pulled or as another character tells Dali – “We got played”.

I understand that this is not the last book, but I was not happy at all.

→ Sirius
Previous article: REVIEW: Made To Hold You: Decades: A Journey of African American Romance by Elle Wright
Next Post: REVIEW: I Was Told It Would Get Easier by Abbi Waxman