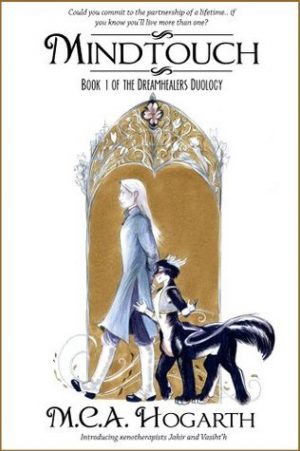 Seersana University is worlds-renowned for its xenopsychology program, producing the Alliance’s finest therapists, psychiatric nurses and alien researchers. When Jahir, one of the rare and reclusive Eldritch espers, arrives on campus, he’s unprepared for the challenges of a vast and multicultural society… but fortunately, second-year student Vasiht’h is willing to take him under his wing. Will the two win past their troubles and doubts and see the potential for a once-in-a-lifetime partnership?

As much as I love SFF and SFF romance, these series normally would be the kind of books that I would abandon rather early. It is so so so so SLOW. Have I mentioned that it was slow? I also have to note that I have not read any other series this author has written and a brief search showed that she wrote *many*, some way more intense in tone and themes than these books. This also means that I probably don’t know the details of the world building as well as I could have if I read the other series. But I don’t feel confused at all after reading two books out of five. I am going to share some very basic spoilers about world building. It is very basic, but I still call them spoilers because the blurb does not mention any of it and I feel that without it you can’t make an informed decision as to whether to grab these series.

It sounds like at some point in time human beings thought it was a good idea to genetically engineer beings that were a hybrid of humans and different kinds of animals. Those beings were used and abused, till they escaped into space and did pretty well for themselves, a lot more races appeared and eventually they all learned how to live in relative harmony on many different planets. I am writing this summary based on the references in these books only, so I could be very wrong. At some points humans got into space too, found the alliance and apparently were accepted into it. I don’t know the details and I don’t think for the purpose of these books you need to know more.

These books (even though I am reviewing book one, I am referring to the second book as well since really they felt like two parts of the same story for me) are mostly about two young students from different races who come to the famous university to study xenopsychology and find out their place in the world and their connection. Please do look at the cover of the first book to see if their appearances are pleasing – one is a bit centauroid in appearance and the other one looks human, but he is definitely not, he belongs to mysterious Eldstrich race

Jahir and Vasiht’h were awesome characters. Jahir is one of the Eldstrich and that means that him coming to Alliance to study is the source of constant curiosity and interest for pretty much everybody else around them. This causes all kinds of physical and mental problems for Jahir. Vasiht’h takes the new student under his wing and these two end up having a much stronger connection than anyone including them would have expected.

But the silliness was somehow believable, because students struggling to figure out which precise field they want to go into and which major will be the best fit for them made perfect sense. In fact this reality of student life made for a very realistic background for a lot of comfort talks as well. Somehow student life and decisions became something I became acutely interested in and, for example, one of the main conflicts was the characters choosing the major that would be right for them and I was *worried* that the characters were choosing the wrong one.

In a way this book is also a romance and the main couple were absolutely adorable together. There is no sex though – one of the characters is very much not interested in sex.

Also, the book has no real ending, but the second one is already available and that one does have a satisfying ending.