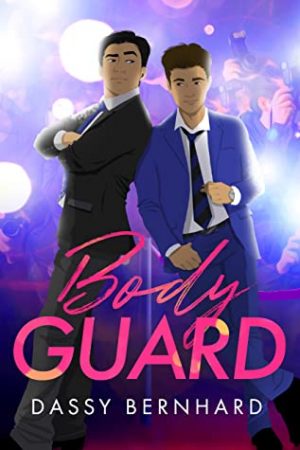 How was he supposed to know that the real-life chairman looked like an actor playing one on TV?

When bodyguard Tang Jun-young saves his clients, a world-famous K-pop boyband, from being kidnapped by stopping the getaway van with his own body, he’s worried that his secret—well, one of them—will be out in the open. Fortunately, everyone’s focus is on the idols, and nobody looks at him too closely—or so he thinks.

Kyo Seung-hyun, the new chairman of the Kyo Group, is looking for a trusted confidant while working on his eccentric playboy billionaire image (he’s got the “eccentric” part down cold). When he meets Jun-young, he knows he’s found his man—in more ways than one. Jun-young is too honest for his own good, more intelligent than he lets on, and too attractive for Seung-hyun’s peace of mind. The superpowers are a bonus, really.

When Seung-hyun tries to correct his deceased father’s past misdeeds, the corruption the two of them unearth is the kind many would prefer to be kept quiet. Jun-young would do anything to keep Seung-hyun safe, but this situation might be more than even he can handle.

*This novel is a revised, extended version of a novella using the same name and cover* .

First and foremost, the narrator’s voice. I don’t think I am going to forget it any time soon but I also thought that something was off for me and I cannot for the life of me to figure out what was off. At the end of the story there is an author’s note and it had a confusing comment – she says that all the characters are speaking Korean in-verse (not sure what in verse means in this context) and that she tried to keep the story as if it was translated from Korean to English. Mind you I have *no idea* if it was actually translated from Korean to English because next comment in her note confused me even more, but if it was maybe that’s what felt off?

I glanced at the reviews on Goodreads and at least one person seemed to think that it was translated, but as I said I am not sure at all. I was really happy that the story took place in South Korea because of course I like to see different countries and different settings in the books I read. I actually think the author knows Korea well based on some things mentioned in the book. Unfortunately my friend who originally came to the US from South Korea was my only source of checking things.

As you can see from the blurb the main couple of the story (or should I say couple “in the making”) is the super rich CEO and his bodyguard. I cannot suggest strongly enough you leave your brain at the door and do not expect any “don’t fall in love with your client or bodyguard” from either of them. Also illegal things for good purpose – as long as you are fighting bad guys is a good or at least a necessary thing. Please note I am not judging the story really does not take itself seriously I promise! It was quite silly, but sweet and often funny for me.

This is how the CEO reacts when a bad guy threatens to expose him as having a previous relationship with a man while he was living in the US.

“Tell me, have you seen Korea’s fifty richest list? Forbes published a new one not too long ago,” Seung-hyun asked, his tone casual, as if they were discussing the weather. “Don’t change the subject!” “Have you?” “I have,” Pang admitted. “Then you must have noticed that my name is on the top of that list. No one is going to ostracize me, Pang. The only thing that’s going to happen is instead of throwing only their daughters at me, my business associates will throw their sons at me as well. Good day.” With that, Seung-hyun hung up the call. Then he face-palmed.

“God, what an idiot,” he told Jun-young. “Can’t even blackmail properly.” Was he planning on issuing him a report card? “I can’t believe I have to say this, but if you are thinking about giving him tips on becoming a better blackmailer, don’t. Just because he isn’t creative enough for your taste doesn’t mean he isn’t dangerous.” “No, of course not. Unlike him, I’m not an idiot. I’m just frustrated with his general incompetence. This guy… no half-baked ideology combined with decades of careful planning, no professional ethics. Just plain old homophobia, corruption, and thirst for power. He would have been voted worst villain had he been a Marvel character.””

What also caused an eye roll from me is that there is an actual science fiction or fantasy element in this story, which also nicely served as a deus ex machina. I thought it was um, not very convincing, but I am still glad I have read the book.

I thought the romance itself was actually quite well done. It really is a slow burn amongst all the fun and games and things the men are involved in.  Also there are no explicit sex scenes. I think kiss is all we get on page. B-/C+