REVIEW: And One Last Thing… by Molly Harper

While I know that being a woman scorned would suck, Lacey Terwilliger, nee Vernon, makes it seem survivable. Nay, not only survivable but rise above-able. Lacey does what I suspect most women in her place would want to do – she gets her revenge on her cheating spouse. But she also ends up with that other important thing, her dignity, as well as growing as a person and ending up with a wonderful new man to have smoking hot sex with on Wednesdays. 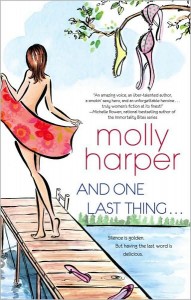 Lacey Terwilliger honestly didn’t have a clue that her accountant husband Mike was cheating on her until the misdirected flowers addressed to “my Bumblebee” from “Stinger” arrived at their house. Even then, Lacey refused to totally believe it until after she’d seen Mike with his tongue down his receptionist’s throat while at his office, in broad daylight and in front of the picture window. A quick check of his home email and the proof was in her hands – and forwarded to her email account. Perhaps she was a bit hasty in writing the scathing, tell-all newsletter and then sending it to Mike’s entire client base plus their friends and family but when your husband is a “faithless, loveless, spineless, shiftless, useless, dickless wonder” who’s been banging his receptionist for a year right under your nose, it’s hard to hold it all in at 1am.

But now the fat’s in the fire and Mike – the nerve of this guy! – is threatening to sue Lacey for abandonment and libel. The whole town is either watching with avid interest or judging her – or both. And even though her lawyer, Sammy “the Shark” is sure she can get Lacey a settlement and out of the libel case, she advises Lacey to lie low for a while. So Lacey heads off to a lake cabin left to her by her grandmother to hibernate and figure out what to do with her life. She can’t help it if the cute looking writer next door thinks she’s off her trolley when they first meet or help the fact that he doesn’t get on well with divorcees. If he wants to settle into a “friends with privileges” relationship with her, he’s going to have to get over all that. And if Lacey wants to move on with her life, she’s going to need to do some emotional growing and stretching. Who says it can’t all happen at the same time?

We here at Dear Author get a lot of arcs. I’m not complaining about that – reading is my hobby and a joy. But sometimes I lose track of them and frankly that’s the case here. I was clearing out a boxful and flipped this one open to try and figure out what it’s about since there’s no back blurb or other info. And it’s the writing, especially the laugh out loud humor, that made me put it in my reading queue next.

Lacey, via you, is a funny, funny woman. She has a snarky yet self deprecating sense of humor that had me in stitches. I wish I could be this clever with quick quips. The situation Lacey finds herself in makes her immediately sympathetic to the reader but if this had just been a book about Lacey mouthing off I would have lost interest. As it is, this is Lacey being shaken up and out of her comfy, easy world and made to take a hard look at herself. When she does that, she acknowledges that her marriage wasn’t everything she thought it would be, that she knew there should be more and that she was tired of trying to be someone else that everyone else wanted her to be. It’s a hard trip she makes and even though it’s funny all along the way, the fact that she makes it is what makes the book.

Lacey could have continued to take the easy way out. She could have crumbled and given in on what Monroe didn’t want her to do. She could have dragged out the divorce proceedings. She could have refused to move beyond the hurt done to her and continued to stifle her growth and her creative writing processes but she doesn’t. She stands up for herself when needed, realizes that she doesn’t want to spend the next forty years in bitterness so that she can say she took Mike down with her, she faces Beebee the Bumblebee and feels nothing but pity and then she avoids the route to quick money which would probably end up hurting her and holding her back.

I wish Emmett, Lacey’s gay brother wasn’t quite as stereotypical but I did enjoy the scene where his friends critique Lacey and Monroe’s relationship from a male POV. I’m glad that Lacey faces up to the town, shows she has class and finishes things with Mike. I love the meeting with Monroe’s family though I do wonder how four doctors managed to simultaneously get time off. It tickled me that Lacey is the one to ask Monroe to move in with her!

For a book that I knew nothing about going into it, this turned out to be a great “from the mountain of TBR arcs” find. I love your funny “voice” and the wisdom and maturity that you make sure Lacey reaches before the end of the story. If Jane sends another one of your contemporary arcs my way, I’ll try and make sure that it doesn’t get lost this time. B