REVIEW: A Boy Made of Blocks by Keith Stuart 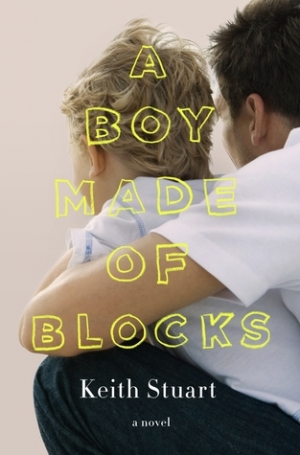 Alex loves his family, and yet he struggles to connect with his eight-year-old autistic son, Sam. The strain has pushed his marriage to the breaking point. So Alex moves in with his merrily irresponsible best friend on the world’s most uncomfortable blow-up bed.

As Alex navigates single life, long-buried family secrets, and part-time fatherhood, his son begins playing Minecraft. Sam’s imagination blossoms and the game opens up a whole new world for father and son to share. Together, they discover that sometimes life must fall apart before you can build a better one.

Inspired by Keith Stuart’s own relationship with his autistic son, A Boy Made of Blocks is a tear-jerking, funny, and, most of all, true-to-life novel about the power of difference and one very special little boy.

Your book was one of the sweetest books I have read in a while without being overly saccharine. We meet thirty-something Alex not at the best moment of his life. He is separating from his wife Jody and eight year old son Sam. They clearly love each other, but Sam is on the autistic spectrum and Alex not being there enough for Sam (not for the lack of trying but the result is the same), and his efforts had not been enough for Jody and she wants Alex to figure things out and do it elsewhere.

The book also hints that Alex had to deal with something that happened in the past which affected him, which turns out to be a family tragedy for which Alex had a lot of misplaced guilt he had to deal with. To me the book was mostly about Alex figuring out his relationship with his son (and then with his wife), so while there is some angst about the past, I honestly didn’t think there was too much of it.

Alex also is also losing his job early in the book, so that added to him not being in the best of spirits.

The book is written in the first POV. Alex narrates it and I really liked the guy, his mistakes and missteps notwithstanding. He loves his family, he just got lost along the way because he could not figure out how to deal with Sam. As an aside, of course mom didn’t have that luxury of figuring things out or not figuring things out, she just had to be there for her boy all the time. I totally got why it became too much for her at some point.

In any event, Alex figures out pretty soon that he has to try and try again with Sam, even though initially more frustration came out of it. However in one of his visits back he learns that Sam likes to play Minecraft; even mentioning the game stopped Sam from crying and screaming.

So Alex decided to start playing with him and the game seemed to help Sam in many different ways. The disclaimer here, I understand that portrayal of Sam is a portrayal of one child on the autism spectrum, however as you can see from the blurb author’s son is also on the autistic spectrum and “Minecraft” helped him to improve leaps and bounds as well. I am not going to question the portrayal of the autistic child by the parent who deals with the autistic child every day.  Obviously Sam is not cured from the autism because he started playing “Minecraft” and fell in love with it, but it helped him to become more articulate, more creative, it helped him to meet friends more easily and he met some real friends who loved him very much.

And it helped Alex and Sam to reconnect with each other.

“As we work, I realize something. Normally, when we play together – in the precious moments he is prepared to concentrate – it is as a shared solitude: I watch or guide or worry about him. Or when we play with the building blocks or Lego, I make something he plays with for a few minutes or simply knocks down. But here, for a few hours, we are working as one – well, as I do what I am supposed to do. But that’s another positive. In this universe, where the rules are unambiguous, where the logic is clear and unerring, Sam is in control.”

It is the sweetest sound, piercing four days of great blank silence. My son, miles away, but suddenly right here under the same boxy clouds. And he sounds happy to have me here, even after everything. He has let me into his world. I’m so stupidly excited I don’t know what to do with myself. He still wants to play with me. I get another chance”.

I thought that interactions between Alex and Sam were very sweet; but I was also very impressed how the author managed to make the descriptions of the computer game fun. Then I read that the author wrote about computer games for the Guardian for a long time before he wrote this book and was not so surprised anymore, but still thought that the scenes of Alex and Sam playing “Minecraft” were some of the best parts in this story.

Don’t worry; they are not playing Minecraft all the time. As I mentioned in the beginning Alex has to figure out a lot of stuff when the book begins. He deals with his past, with his friends and his family and for the most part manages to do quite well. I thought he definitely grew up throughout the book, he was not a horrible person when the book began, he did not experience personality transplant, but he understood things better and dealt with the past trauma in his life.

The book is by no means a romance, I would classify it as a family drama, but it had very hopeful HFN ending.