This review is reposted from December 2008 when it was originally released in trade paperback. I thought I would revive the review because the book is being released in mass market, four years later. 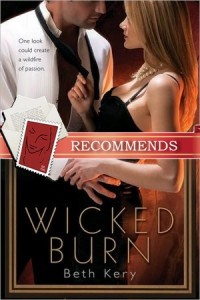 Niall Chandler  and Vic Savian live next door to one another in a high end apartment complex in Chicago.   They’ve been attracted to each other but haven’t acted on their attraction until Vic hears Niall being hassled outside her apartment one night by an over eager date.   Vic dispatches the date and the two embark on steamy encounter after steamy encounter.   The two start dating and it seems that there is little conflict to impede the two from moving foward to the inevitable happy ending.

Vic Savian is a prize winning playwright who has recently moved to Chicago and will be opening a new play. His temperment is hot and passionate (much like you would expect a playwright to be).   He is the leader in the bedroom. Niall is a bit of an innocent although she has good reason to be. She felt embarrassed by her reaction to Vic, like a rube. Vic doesn’t necessarily glory in her innocence, just her willingness and openness. Vic reads very earthy, almost animalistic, but he doesn’t try to pretty up his attitudes toward Niall or toward sex. Vic is very much a what you see is what you get kind of guy. For example, when he is nervous about the opening of his new play and doesn’t attempt to hide it, sweaty palms and all.   When he is confronted with an old flame, Vic admits that he not only slept with the woman but that he was in a pretty bad emotional state at the time.

“I slept with Eileen Moore years ago, Niall. It was after I went through an ugly breakup with a woman I was supposed to marry. I was dead drunk for almost six months after the fact. If you want to know the truth, Eileen probably thought of it as a series of pity fucks. I was damned pitiful, that’s for sure,” he said with a wry twist of his handsome mouth.

Because Vic is so open, the conflict is driven primarily by Niall who is the opposite.   She doesn’t really allow Vic very far into her life, keeping him locked out of her family and her past because she has a  very big secret. She hopes she can get rid of that secret before it affects her burgeoning relationship with Vic but her furtiveness outside the bedroom raises alarms in Vic. Ultimately, Vic finds that Niall engages in a huge betrayal and this brings up old hurts.   Vic’s own past has it’s nightmares. His light burns hot and bright and it always has. Sometimes he’s not sure whether his relationship with Niall is a healthy thing, but he can’t keep away from her. In many ways, for all his masculinity, Vic is the vulnerable one here.   Niall has some doormat issues and is definitely overshadowed by Vic which is why I can’t give the book a higher grade. She does not have the backbone of steel of the quiet heroine in Gateway to Heaven but I did find her sympathetic.

I can’t say much about Niall’s secret as it would be a big spoiler. Needless to say that her past is not letting her move on no matter how much she wants to.   I went on to read several other Beth Kery books and I found them to all be hot, although some I liked better than others.   I can’t help but think that the successful marriage of emotion and eroticisim will make Beth Kery a big name in erotic romance.   I know that this is in trade, but if a reader likes ER, then I think she’ll like this book.   B