I’ve always been fond of your voice but often found the narrative running away. In Sheltered, the balance between the deep point of view and the emotional arc of the characters was better tuned here and for the most part this emotional journey was engaging. DA January and I engaged in an email discussion about this book and thought we would present a joint review. 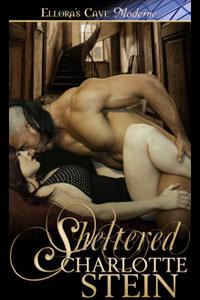 Evie is a nineteen year old who lives with her parents. She is sheltered, as the title suggests, but not in a comforting loving fashion. Evie’s parents rigidly religious and she operates under deep fear. There is a ominous tone that hovers around Evie’s thoughts, suggesting she might be the victim of serious abuse. “It wouldn’t even be the belt, for a creature like this in the house with her. It’d be a hole dug in the garden and her in it.”

From her yard she can see a young man buying pot from the next door neighbor. She’s intrigued by him and ventures outside of her comfort zone to speak to him. Everything about him is different. He has a tattoo on his neck, piercings in his eyebrows, a strange haircut. His appearance could not be more different than her own with her Mary Janes and long skirts.

Tyler Vandervoort or Van, as she learns, is attending college and dreams of being an artist. Evie’s dreams are much smaller. She dreams of being freed from her home, her parents control, and perhaps even herself.

JANUARY: Overall, I thought this was a really fun story. It was hard to put down when I was reading it, but after I finished it, I was left unsettled by a few things. Evie seemed inconsistent at times and I had doubts about the HEA. But for a ‘first love’ sort of read, this was excellent. I actually really liked that Van and Evie seemed like realistic teenagers/college-age adults with those sorts of problems. I think this story was told all from Evie’s POV and I enjoyed that, because we got to see her mentally blossom and her anxiety as she struggled to cope with the forbidden hopes and feelings she had.

I really liked this story but I felt both characters ‘slipped’ in their characterization repeatedly. Evie is raised so deeply religious that she refuses to touch herself and rubs against pillows. And yet, she uses the words ‘cunt’ and ‘fuck’ while imagining sex. This was jarring. I understand that it would not be sexy if she talked about touching her pee pee, but I also needed the story to be realistic, and this took me out of the realistic every time.

My biggest problems with the book were two fold. First, the dark cloud of Evie’s parents hung over the book but nothing bad ever happened to Evie. Not when she was smoking pot on their front porch, a scent that can linger not only in the area but on her clothes. Not when she and Van made out on the porch for the neighbors to see. Not when she and Van were alone in the house on several occasions. Evie remained relatively untouched during these days and adventures.

Second, Evie desired freedom or so we were told but she essentially trades one caretaker – her father – for another – Van.

JANUARY: I did think she used the father thing as an excuse quite a bit. The father and mother were rarely on screen and it was very convenient for Evie and Van to get together without anyone finding out. But this didn’t ring as contrived as some of Evie’s statements about how sheltered she was. At one point she comments that her parents took her to an orphanage where Oliver Twist ate gruel and she was made to sit and eat with them to teach her about bad children. But this is someone that bikes to college and likely went to public schools. Surely she would have some knowledge of how things worked? This, again, was totally inconsistent for me. I could have understood it more, perhaps, if Evie had been homeschooled all her life and was taking classes online. Then I might understand the total shut-in mentality that she was supposed to have.

I did think that once the two ‘got together’ and they shared a smoke, the sexual chemistry went wild. I really liked how the two of them got together and took it slow, and they seemed to be hiding out together and exploring each other like teenagers, which felt very well done. The second half of the book is excellent. The first half is lukewarm for me.

I did have issues with the ending and am concerned for their future together. Evie has no funds and she has traded one man’s safekeeping for another. The amount of money that Van has in the bank is a decent amount, but when you think about two people and college, it doesn’t seem like nearly enough. If these were my relatives, I would be concerned for them. I think I ended up liking the concept more than the reality. Plus, I was a little concerned that while the sex was hot, he was very into Evie because she was so inexperienced. What happens when she is no longer the wide-eyed virgin and just another girl? Will he lose interest? This did not sit well with me.

JANE: Yes, exactly, her “liberation” was being taken care of by someone else instead of truly stretching her wings.  However, like you I appreciated how different the book was.   One thing a Stein story excels at is scene tension. Each scene is fraught with the possibility of discovery. The tension makes each interaction between Van and Evie vibrate.    B-/C