REVIEW: The Witness by Nora Roberts

I’ve always been a fan of the single title romantic suspense books you’ve written over the straight contemporaries which is probably why some of the J.D. Robb books are my favorite in the JD Robb/Nora Roberts bibliography. In this 200th book you’ve published, you display exactly why you’ve managed to capture reader’s attentions for over three decades. 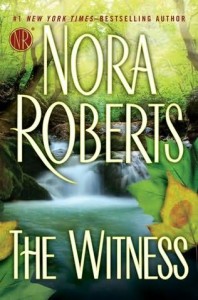 The Witness features a Lisbeth Salander character, a woman on the run with a lot of money, a talent with computers, and a driving need for revenge. When Elizabeth Fitch was 16, a russian mob ruined her life on the one night that Elizabeth rebels from her mother’s strict rules. A prodigy, Elizabeth was driven by her mother to dress a certain way, read certain books, and be a neurosurgeon. There was no room for fun, friends, and boys.

Elizabeth had had enough and she creates a couple of fake IDs, one of which buys her a friend for the evening and the two go to one of the hottest nightclubs in Chicago.  One thing leads to another and Elizabeth becomes witness to a mob hit that could bring down Volkov organized crime family. Spirited away, Elizabeth has to go on the run.  About 90 pages are devoted to laying the ground work for the suspense and investing the reader in Elizabeth’s outcome and those 90 pages are well spent.  By the end of chapter one, I ached for Elizabeth’s loveless childhood and by the end of chapter eight, I hoped that something, anything would finally go right for Elizabeth.  I was so committed to Elizabeth that I would have overlooked any dues ex machine for her to have a positive outcome.

Twelve years later, Elizabeth now renamed as Abigail lands in Brooks Gleason’s town of Bickford. Brooks is the police chief with an insatiable curiosity and he cannot help be intrigued (and wary) of a stranger who has come to his small town.Most of his days are spent mediating small claims but big ones as well like the continuing domestic abuse of a wife who keeps excusing her husband’s behavior.The emotional conflict of the two is low and I was surprised at how easily Elizabeth allowed Brooks into her life, given her natural reserve.

The reader always knows that Abigail can’t  have a happy ending unless the mob issue is addressed but the question of how one woman and one small town police chief can bring down a powerful and dangerous Russian mob family hangs like an unhappy cloud over their blossoming relationship.

I saw one reader refer to Abigail from suffering from Asperger Syndrome. Abigail was reserved and awkward with other people but I felt that was a result of a conditioning but an unfeeling parent along with Abigail’s accelerated learning path which did not expose her to forming social relationships with her peers coupled with over a decade of hiding rather than a genetic condition.  Abigail’s awkwardness is offset by Brooks’ relentless friendliness.  They are polar opposites.

The main drawback of this book is the lack of emotional conflict.  Abigail and Brooks fall for each other pretty easily, particularly given Abigail’s natural reticence.  I was surprised that Brooks wasn’t more suspicious of her and worried more about the danger that this strange person would bring to his little town but Brooks is nearly instantly attracted by her and concludes her strangeness must be the result of some danger to Abigail.

For contemporary readers who like some non gruesome romantic suspense on the side and for romantic suspense readers who like a sweet romance, The Witness is a great way to pass the time.  It does not have a lot of angst, but it does have fully realized characters, two great main characters, and a good suspense.  Oh, and a dog with its own personality.