REVIEW: The Midwife of Venice by Roberta Rich

I have a love/hate relationship with historical novels. When they work, they can be wondrous – taking me to foreign lands, to different eras, into the rich and complex lives of the characters. Bad ones can seem endless and are worse if I get the feeling that these are just people dressed up in costumes yet spouting 21st century feelings and ideas. “The Midwife of Venice” is a trip to a world I didn’t want to see end. 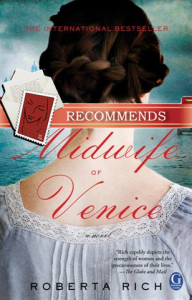 Hannah Levi is willing to risk death not only for herself but also for the entire Jewish ghetto of Venice. Despite the warnings from the Rabbi, she goes with the rich Christian man and his brother when they come to her squalid home in the middle of the night, pleading for her help. Hannah has a reputation of being the best midwife available and the Conte disregards the edicts against Christians seeking the medical help of Jews in a desperate bid to save the live of his frail, laboring wife and their unborn child. Knowing the danger she faces, even if things go right, Hannah demands the outrageous sum of 200 ducats. Without blinking, the Conte agrees to her price and the three set off to a palazzo so richly decorated it dazzles Hannah who is used to the cramped, dirty surroundings of too many people packed into too little space.

Things are as bad as Hannah fears and it takes all her skill to deliver the child, a beautiful boy, and save the mother’s life but the price Hannah earns is well worth it. With it, she can travel and ransom her husband from slavery at the hands of the Knights of Malta. Isaac had set sail for the Levant in the hopes of making their fortune in one trading trip only to fall prey to the marauding Knights who even the people of Malta agree are little better than brigands and pirates. But once there, he discovers that he is to be sold for the duration of his stay so that his labor will earn his new master money while all wait for the ransom. First one person then another buys him and Isaac works and schemes to survive the ill treatment in order to get back to the woman he loves. When horrific news reaches him and a terrible choice is laid out for him, will he finally give up on the dream of a future with Hannah? And can Hannah escape the clutches of the Prosecuti, the dreadful plague raging through Venice and the revenge minded men determined to see her dead?

Okay, I said I didn’t want to see this world end but I did wonder at how you were finally going to get Hannah in Venice and Isaac in Malta back together again. They’re separated not only by distance but also by the restrictions that have been placed on them. Isaac is a slave on an island and Hannah is dependant on getting enough money to sail after also outwitting those who would see her hung as a witch for her birthing instruments and or strapadoed for rendering aid to a Christian woman. You throw some formidable barriers to their HEA in the way and yet also neatly maneuver them over, around and past those roadblocks in ways that don’t strain my credulity.

1575 Venice and Malta also come to life here. The dark, cramped quarters of the ghetto in which the Jews are forced to live as well as the splendid marble palazzo filled with silks, spices and elegance are vividly recreated. The differences between Hannah’s life as a Jew and the unfettered existence of the Conte and his family are starkly delineated in every scene they both inhabit. The one person I would have enjoyed learning more about is Hannah’s estranged sister Jessica who now makes her way through life as a converted, high class courtesan. I was glad that they managed to talk and forgive before Hannah sails away forever.

Malta, on the other hand, sounds like a place to avoid – or maybe it’s the Maltese. Poor Isaac does make me laugh with his witty, though perhaps best left unsaid comments and thoughts about the people he encounters there. Of the whole lot, Sister Assunta seems the best with loutish Joseph and his sheep piss aromatic trousers a distant last. One thing I like is that not all of the people Hannah and Isaac encounter are bad. True both of them have to use their wits to navigate through life in a world that sees nothing wrong in persecuting Jews but they also discover that in some Christians and Muslims there is goodness to be found as well.

I wasn’t sure how well I’d like a book in which the hero and heroine are separated for almost the entire time. But here it works. Hannah and Isaac think of each other so much that the distance separating them felt as if it didn’t exist. There are little details of their life together they remember and hope to resume as well as major events that have cemented them together as a couple. Isaac might just win my hero of the year award for how he responds to a challenge that I doubt few could match. Though his decision wasn’t shouted from the rooftops and probably went unnoticed by the majority of people on Malta, it’s as big a gesture as any I’ve read about in a long time.

I’d not heard any buzz about “Midwife of Venice” but am glad that Jane sent it along to me to try. Hannah and Isaac are a wonderful, devoted couple and it’s great to see them reach their HEA with a bright and shiny future ahead of them. This is actually one book I’d love to see a sequel to. B+

→ Jayne
Previous article: Open Thread for Authors (Author Promo) for May 2012
Next Post: Reading/Watching/Baking List by Jayne for March and early April