After I finished reading a really depressing and disturbing book, I felt the need for a complete change in direction. Jane had sent me a copy of your debut novel a few months earlier. Seeing that it was a historical mystery, I figured that it was different enough to suit my purposes, and dove in. 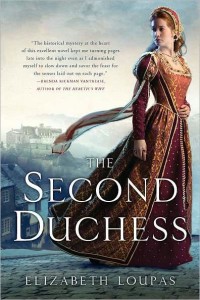 The Second Duchess is based on the Robert Browning poem “My Last Duchess”, which in turn was based on real people and incidents in 16th century Italy. Alfonso d’Este, the Duke of Ferrara, was an ambitious and well-rounded Renaissance man, and a grandson of the infamous Lucrezia Borgia. His first wife, another Lucrezia (Lucrezia de’Medici) died two years into their marriage; it was whispered that her husband had poisoned her. It was only in the early 20th century that scholars concluded that she was the dead duchess of “My Last Duchess”.

This book is not about Lucrezia (though she ends up being one of the more interesting and sympathethic characters, anyway) – as the title suggests, it is about Alfonso’s second wife, Barbara of Austria. The book is told from her perspective, and opens with her entrance into Ferrara for her wedding. Barbara is, at 26, a bit long in the tooth to be getting married for the first time, and she is, by her own account, less than lovely. But she’s smart and brave, and she wants this marriage. She wants children and the opportunity to be mistress of her own realm, rather than just an accessory in her brother’s court. Unfortunately, Barbara quickly learns that life in the court of Ferrara is treacherous, perhaps even deadly. On her wedding day, a mysterious hairdresser warns Barbara to beware of poison. Alfonso’s two sisters make clear their disdain for her. And Alfonso himself is cold, proud and imperious. Fairly quickly, Barbara wonders what she has gotten herself into, especially as she hears more of the rumors regarding Alfonso’s first wife Lucrezia.

Alfonso married Lucrezia when she was only 13, and apparently immediately deserted her to go off to the court of Henri II of France, a great friend of his. When he returns, Lucrezia is 15. They are not together for long before Alfonso abruptly locks her up in a nunnery, where she mysteriously dies after a short while. Barbara hears all these stories and begins to hunger to know what happened to the first Duchess of Ferrara. She doesn’t feel like she can continue in her marriage without knowing whether Alfonso murdered his wife or not. But Alfonso is extremely closed mouth on the subject, and at one point so angered by Barbara’s disobedience in regards to it that he beats her. The incident causes a rift between the two of them. Barbara’s pride is more hurt than anything, so instead of heeding Alfonso’s warnings, she continues her investigations discreetly.

Barbara’s first person voice is interrupted by the voice of the dead Lucrezia; she is immobili (apparently a device made up by the author), a sort of ghost unable to pass onto the next realm and forced to watch those she loved and hated go on about their daily lives. At first she is not very likable; she is contemptuous of Barbara, mocking her homeliness (she calls her la Cavalla, a reference to Barbara being horse-faced). She seems vain and immoral, reminiscing on how she reveled in the pleasures of court, in her own beauty and the attention of men. She hates Alfonso, who was never drawn to her beauty as others were and who was contemptuous of her background, dismissing her as a pawn-broker’s daughter.

As the book goes on, though, one begins to feel for Lucrezia and to see her softer side. She worries that she will end up in hell once she moves on from her immobili state; she worries about the soul of her unborn child, since the child was never baptized. She mourns a discarded lover who was killed on her behalf, unbeknownst to her, and worries as she watches over her faithful servant, Tommasina, who lingers secretly in Ferrara hoping to exact revenge upon Alfonso. Lucrezia’s a flawed character, to be sure, but in the end she was really nothing more than a spoiled and willful child who never got a chance to grow and change.

I had mixed feelings about Alfonso; given that this book was not a romance, I don’t think it’s necessary for him to be as relatable/sympathetic as I might want a romance hero to be. (I certainly don’t mind flawed romance heroes, but I think I expect a bit less realism and a bit more romanticism from them.) Alfonso is extremely arrogant, autocratic and dictatorial. He is ruthless – capable of personally directing the torture of prisoners in order to get information he wants. He was obviously not a good husband to Lucrezia (nor was she a good wife to him, but she was little more than a child, and she could have probably loved him, if he’d tried at all with her), and in many ways he’s not a very good husband to Barbara at first. Besides the beating, he often places his pride and wishes far above any concern for her. It’s only little by little that the reader sees the very subtle signs of his softening towards Barbara. By the end, he is not exactly a warm and cuddly character, but you can believe in an HEA for him and Barbara (though I wouldn’t advise reading his Wikipedia page if you want to maintain the idea that they had a long and happy life and many children together).

Barbara is at the heart of the book, narrating, but I felt pretty neutral about her. She wasn’t unlikable, but she also wasn’t really that interesting to me.

Ultimately, the mystery of how Lucrezia died did not absorb me that much, but that’s not unusual in historical mysteries (I feel like I read them more often for the characterization and the setting than the mystery). As a whole, I felt a bit detached from the book and its characters, even while I admire the depth and realism of their depictions. Poor dead Lucrezia actually ended up being the most vivid and sympathethic character to me.

My grade for The Second Duchess is a B.