REVIEW: The Games by Patricia McLinn

In ESPN’s The Body issue (their answer to SI’s infamous Swimsuit edition), an article ran about licentious behavior in the Olympic Village. Put together a thousand young people with high energy levels and incredibly toned bodies and it’s spring break, athlete style.

And on it went for eight days as scores of Olympians, male and female, trickled into the shooter’s house — and that’s what everyone called it, Shooters’ House — at all hours, stopping by an Oakley duffel bag overflowing with condoms procured from the village’s helpful medical clinic. After a while, it dawned on Lakatos: “I’m running a friggin’ brothel in the Olympic Village! I’ve never witnessed so much debauchery in my entire life.”

Hope Solo admitted being drunk at her Today show performance and sneaking a celeb into her room the night after their gold medal winning performance. This whole article made me think of Patricia McLinn’s The Games which I had read a few years ago but never reviewed. 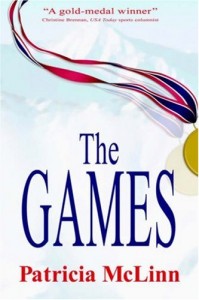 Rikki, Amy, Tess, Kyle and Nan are thrown together as “leftovers.” Biathletes are low on the Olympic totem pole and Amy Yost was a surprising entry, qualifying for the third spot on the Olympic team at only age 15. Because of the category length to the book and the multiple points of view and storylines, we just really get snippets of relationships. Good, authentic feeling snippets, but shorts nonetheless. All of these characters were so well drawn that I wanted to read more about them.

Kyle and Rob butt heads with Rob challenging Kyle’s mental toughness and throwing Kyle’s privileged background at her. “The end looked mechanical. Like some expensive windup doll.” Only Rob’s animosity toward Kyle stems from the fact that he cares for her but won’t allow himself to act on it as her coach.  Plus he doesn’t want to be with someone who loves him for his “image” – hot shot gold medalist skier.  Kyle has always crushed hard on Rob and one night she thought her feelings were reciprocated but she awoke with a broken heart.  An issue with Kyle’s health provides the suspense to the storyline.

Tess met Andrei, a pairs skater eighteen years ago when he competed under the Soviet flag. They shared a secret and illicit romance. As a Soviet skater, Andrei, wasn’t allowed to mingle with the skaters from the other countries, particularly US skaters. Tess recognizes that 18 years is a long time to have hurt feelings but she can’t set aside the sharp pain in her heart whenever she sees Andrei whom she believed would defect for her.  Andrei’s never forgotten Tess.  Tess was the weakest character in the book and her romance with Andrei, while it had good potential, was never fully realized.  Her hurt feelings 18 years later and her inability to sympathize with Andrei’s situation was frustrating.

Rikki develops feelings for the intense Lanny Kaminski which she doesn’t think are returned until one night early on in The Games when the hockey team is celebrating their first win. Lanny convinces her that their short conversation and heated glances are enough basis to sleep together “Hockey’s fast, Rikki. If you stop to think, the play’s already past you. You have to trust yourself, and go for broke.” Lanny’s spent 12 years in the minors and this is his first and likely last Olympics. He’s the old man on the squad and determined to win a medal. Rikki’s a biathlete, a sport about balance, sustained effort over a long period of time.  I am not sure if their relationship got more screen time but it was my favorite.  Their romance also provides the steaminess of the story.

I laughed or maybe smirked at the line Lanny gives Rikki:

“You’re the first man I’ve ever met who-” Her breath hitched, ut she got the rest of the thought out. “-indulges in foreplay after sex.”

He raised his head slowly.

The story also provides great insidery tidbits so that you really feel that you are getting a peek behind the curtain.

Tess’s focus was on Amy’s success, noting that while Amy wasn’t expected to medal, she need to perform well even in practices.

“One of figure skating’s arcane little idiosyncrasies: the judges judged practices. They sat among the spectators for these official practices, and they familiarized themselves with routines and skills, built expectations of what should be done and how. The final scores would be a measurement of how well the skater lived up those expectations under the spotlight….In the next few minutes her reputation would start to form, her place in the international hierarchy begin to be established.”

We are shown the athletes subtle and not so subtle competition amongst even teammates but also the great spirit of comrarderie that extends between nations as friendships form between athletes of competing countries. I will say that there was so much drama going on that I wondered how any one could focus on the events.  (Ryan Lochte was quoted as saying that 70% of athletes are having sex so it’s believable)

One of the most endearing moments of the book was when one of the athletes wins the bronze. It was exciting and the result encapsulated the euphoria of the Olympics better than the moments where the characters won gold.  While it is a winter Olympics tale, it is still a fun read particularly this time of the year. B