In keeping with the Olympic spirit, Amy Legend is a former Olympic gold medalist in figure skating. Not the summer Olympics, but still.

“To their respective families, Jack Wells and Amy Legend are outsiders. A free-spirited man-of-all-trades, Jack takes life as it comes—not at all like his supremely organized mother, the admiral’s widow, and his methodical lawyer sister. Amy, a professional athlete with exquisite taste and golden beauty, has a glamorous career a world apart from her bookish older siblings and college professor father.

When Jack’s mother marries Amy’s widowed father, they invite all the children to spend the summer at the Legends’ retreat in northern Minnesota. They never imagine just how well Jack and Amy are going to get along—as affection unexpectedly flares into a burning attraction that threatens to damage already fragile familial bonds. Agreeing to deny their desire until the vacation is over—caught between long-simmering conflicts and clashing personalities—Jack and Amy find, nonetheless, that they are falling deeply in love. And passion this strong couldn’t possibly wait until summer’s end . . . no matter what the consequences.” 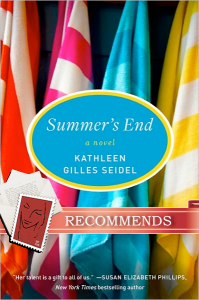 A couple of weeks ago, one of my reviews about a female athlete was posted here at DA. People commented about how rare it is to find a female athlete in a romance and that “Summer’s End” is one of those rare books. My eyes widened in amazement as I looked down on the (awful clutter) that is my computer desk and fished your book out (from under some piles of paper). Here’s to serendipity.

The back cover blurb might make this sound like it focuses on the romance but I found that to be just one of many things happening. This is a lovely group ensemble book that probes the dynamics of multigenerational issues. Things have always been a particular way at the lake and Legend family seems stuck in a serious rut about it. Some has to do with Hal’s first wife and her aristocratic English lack of care about cobwebbed corners + insistence on tradition. Some is the overspill of grief at said mother’s death. Some is hunkering down and protecting “the way we’ve always done it” in the face of new stepmother Gwen. But they all need a stick of dynamite exploded to lift them out of all this. Which is what happens.

Lots and lots of changes take place over the course of the book but for the most part, I can believe them. Phoebe finally deals with her reluctance to part with her grief for her mother and her resentment of Amy for seemingly not feeling the same way. These two work this out and hopefully will have better communications in the future. Jack lays to rest his unfinished feelings of failing his father’s expectations and comes to peace with the fact that he is and isn’t like his father. They both hate(d) rules and regulations but his dad worked them to his advantage while Jack has to find something that lets him avoid them. Giles wants space for his family away from a location he’s never felt physically comfortable in. The new house will be built to suit them and its location will give them some privacy. Ian is still working with a counselor as to why he felt drawn to his critical wife. This part still feels underdeveloped to me but then it also helps the book avoid a totally neat and tidy wrap up of all issues. And Afterthought Amy wakes up to the fact that her distance from her family isn’t totally their fault then starts to arrange her schedule some to fix that.
There are a lot of characters to be introduced to, learn about and keep straight in the book. Most of these people have scenes from their POV except for Ian – I don’t recall any from him. I found this no loss as what the others see and what he does show his feelings well enough. So why then have one or two scene with the POV from more secondary characters which adds nothing to the story? Did we need Maggie and Joyce? No, I don’t think so, especially as they each had only one. More of Gwen? Yes, please and Hal too.

Taking a months vacation every year? Jeez, who does this these days? Lucky for the Legend family that they’re mainly professors who can take the summer off but how about lawyers Phoebe and Giles? Yeah lawyers can take some time off but I think this shows the book’s age. I did enjoy the time devoted to Amy’s skating career and the detailed descriptions of what it takes to reach that level and attain those dreams.

Hal and Gwen: the book starts with them, but then – for Hal at least – for the most part they step back out of the action. Gwen is seen more as she’s trying to fit into her new role at the lake and into this family but for pages and pages on end, Hal disappears. I would like to have read how these tensions were seen by them as a couple and not just by Gwen. But her organizational skills are a product of her history as a Navy wife while maybe Hal is used to stepping back for the strong women in the Legend family.

The romance between Jack and Amy is slow yet also, I know I’m being perverse here, fast and underdeveloped to me. They skirt around each other for weeks then suddenly give into temptations then pull WAY back almost immediately and have little contact until WHAM! they decide to get married. Sorry but as much as I like these two it just isn’t enough for me. I’m told they’re in love and that there’s no dabbling in a relationship for them – it’s all or nothing – but why? I don’t get the reason they can’t take some more time with it.

As for epilogues and last chapter wrap ups, I can usually take them or leave them. Here the last 20 pages are too detailed about some things – the dress up Thanksgiving feast – at this point, who cares? – and skim over others such as Nick’s fight to discover his father and Ian’s family working through massive changes of the past year.

A passage at the end of the book says everyone changes and that is the truth. Some of these people annoy me to no end when the book starts while others have been doing the long suffering martyr thing. Most of the changes come slowly over the month long stay at the lake or take even longer up til the Thanksgiving gathering. The exception being the change in Ian’s marriage and relationship with stepdaughter Maggie which is an overnight blowup. But the mix of the two time frames makes the whole thing more believable. Some change is due to actions while others are due to long simmering feelings and resentments that are finally expressed. I might not have started out liking some of the characters but by the end of the story, you made me care for them and relish the improvement in their lives.

Yes, I have some issues with the book but the characters come alive for me. For the most part, detailed descriptions are eschewed in place of showing who these people are and their relations to each other. I can feel the love, the tension, the resentment, the peace, the misunderstandings as if they’re playing out in front of me. Juggling this many characters and still maintaining that is a feat. I never lost interest in either the characters – who are flawed but react believably – or the story and am glad to see this book reissued for more people to enjoy. B