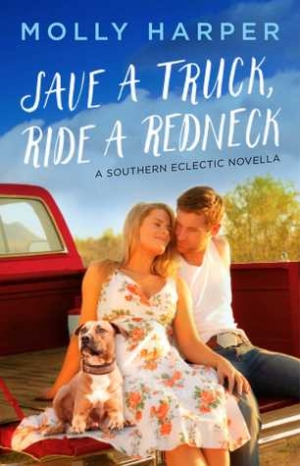 The novella, Save a Truck, Ride a Redneck is the first installment of your new Southern Eclectic series.  A full length novel, Sweet Tea and Sympathy, is coming out in November and I understand there are two other novellas to be released in the next few months as well. Save a Truck isn’t really a prequel as the main characters in Sweet Tea and Sympathy are different, but it does introduce the McCready family and various other quirky characters from Lake Sackett Georgia and it is set in 2006, before the events of Sweet Tea so I guess it technically fits the brief.

Marianne McCready is returning to Lake Sackett for the summer, after graduating from the University of Georgia. After the holidays, she will be starting law school – it’s all part of her seven year plan. Her mother has guilted her into coming home for the entire summer – apart from flying visits at Christmas, she has avoided the place, as it is also the location of Carl Dawson, the boy she broke up with before leaving town.

The McCready family run The McCready Family Funeral Home and Bait Shop. Yes, that’s right. The series is not called “Southern Eclectic” for nothing. Marianne’s dad, Junior, is the town mortician and coroner and Marianne’s brother, Duffy, and her mother, Donna, do fishing tours on Lake Sackett. Aunt Leslie runs Sarah’s Snack Shack opposite Jacks Tackle & Stuff, Uncle Bob works in the funeral home, as does cousin Frankie. That’s not even all of the McCreadys either.

Marianne always felt a bit like she didn’t quite belong. She freaked out when she saw her first dead body so she knows working in the funeral home is not for her and she prefers reading to fishing. She was desperate to escape Lake Sackett and the stereotype of being married with children before age 21 and always wondering what “could have been”. Marianne had been planning on keeping a long distance relationship with Carl but when she heard he’d been spotted looking at engagement rings, she panicked, dumped him and skedaddled.

Now, Marianne is back and Carl is right there, all monosyllabic, stoic, Southern boy. As cousin Frankie describes him, Carl is a unicorn.

“He doesn’t drink too much. He’s employed and works hard. He doesn’t have commitment issues, kids, or crazy ex-girlfriends. He doesn’t attach way too much emotion to the outcome of UGA football. He’s a mythical, perfect man, difficult to find. Impossible to capture. A unicorn.”

There are other things going on as well. For some reason, Marianne’s mother is desperate for Marianne to talk to her father about something. And Marianne is wondering if law school is what she really wants after all. Does she want to wait another three years before starting her working life? If she doesn’t go to law school, does that make her a failure?

While trying to find her dad at a convenient time to have a conversation and making amends to Carl, Marianne starts working in the funeral home over the summer, where there is a major kerfuffle between the Trinkitt siblings on the one side and Burt Beacham, over what funeral arrangements should be made for their soon-to-be-departed mother and lover respectively. The McCreadys are sympathetic to “Mr. Burt” but the law seems to be on the Trinkitt’s side.

There is a delightful humour to the story. My sense was that the pokes at Southern stereotypes were done lovingly from an insider’s point of view. The end result was that the story has many wonderful turns of phrase, quite a few of which made me chuckle – but there is no meanness there.

Uncle Bob gave Lemm one last look, as if to say, I don’t know how many kicks it would take to whoop your ass, but I’m willing to figure it out.

The novella sets up the series, introduces the family and resolves the romance between Marianne and Carl – so it has a lot to do. In just over 100 pages. That being the case, it ought not be a surprise that the romance is relatively understated. Because Carl and Marianne already knew and loved each other, the speed of it all worked for me but there is not a huge amount of page time devoted to their relationship either. There is no sex in the novella either but I didn’t feel anything was lacking – frankly, had one been present it would have felt shoe-horned into the book.

Marianne is initially dismayed to find that apparently Carl is dating a newcomer, Jessie. Despite her best efforts, Marianne finds Jessie is lovely.

Jessie Beele was even prettier close up. She had a smooth cameo of a face, naturally rosy lips, big eyes the color of violets. Hell, Marianne wanted to crawl into her lap and ask for a story, which would probably be weird.

But all is not as it seems and some frank conversations, together with a dose of forgiveness and three years worth of maturity on what went before have things turning out right.

There is a bittersweet undertone to the story (though Marianne and Carl definitely get their HEA) due to some revelations late in the piece but for the most part, the story is fairly light-hearted and sweet without being syrupy.

The McCready family are a close-knit group, full of quirks and charm. Save a Truck, Ride a Redneck lived up to its promise for me and I’ll be lining up Sweet Tea and Sympathy soon.
Grade: B