REVIEW: Off the Edge by Carolyn Crane

Apparently this is the second book in a series about members of The Associates, a somewhat altruistic entity that is funded by a secretive billionaire. I have not read the first one and didn’t miss it at all. 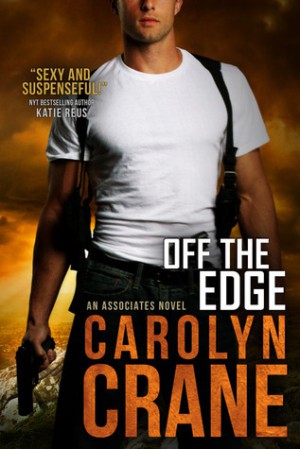 Peter Macmillan lost his fiancee and his family in a Mexico and he transformed from Professor Peter Maxwell to the hunter Macmillan. Peter is a linguistic specialist and the detail with which this was incorporated into every aspect of the story from how Peter finds his prey to why he connects so intimately with Laney Lancaster. I was fascinated by this.

He rubbed his eyes. “Good lord, woman, if you miss your alcoholic hoarder Mama that much, go back to Florida.”

Rio turned to him. “That’s what she’s singing about?”

“More or less. And all the bit about dinner—the cornpone mama meaning so well. The whole Mama song is infused with classic child of alcoholic thinking. It’s probably the reason our poor Laney up and married that controlling husband.”

Rio stared at him incredulously. “I’ve been listening to these songs for three nights, watching the tables. They’re just…lists of things. You can’t be getting all that meaning from lists of things.”

“English Lit 101. A poem is rarely about one thing. A rose is more than a rose. A cigar is more than a cigar.” Macmillan had always had a soft spot for the poets. Back in his life as Peter, anyway. He broke off a bit of cake. “My guess is that she’s on the run from that controlling husband.”

Laney is holed up in a hotel in Bangkok, Thailand, singing little songs that she has written herself. She’s there because it’s the only safe refuge she has found after she sold out her criminal husband to the FBI. Peter hears these songs and they speak to him. But her existence is spare. She lives in a hotel that she rarely leaves, she sings for her supper, and has little interaction with anyone but her friend Rajini whose family owns the hotel. Rajini has promised Laney that her brothers will get her fake identification so that if Laney needs to run again, she will have the means to do so but Rajini’s promises don’t ever seem to come to fruition.

In the meantime, Laney hides turtle-like within the hotel, writes her sad songs, and dreams of a life where she is something more than just background noise in a foreign hotel dining room. In this hotel, however, terrorists are gathering together to bid on a weapon called the TZ-5. There’s a little super hero wink and nod at the scope of this weapon and the gathering of the criminals but it is more than a mere MacGuffin that is easily discarded in the storyline when convenient. Instead the weapon is the focus of the suspense and the disparate threads are pulled together tightly at the end.

Language is so important in this book and used so cleverly:

“Not a professor, just an adjunct, there for the quarter. A subject matter expert, he called himself. The way he said it, she got that it was a buzzword, and that he didn’t quite like it.

“Subject matter expert,” she said, rolling it around for herself.

He gave her a sly look. Lordy, his charm could light a burnt-out bulb. “Smee? Don’t even utter it. That’s how words like that start.”

I did feel that there were some elements of the suspense that were rather strained and required acceptance by the reader that these coincidences really could happen. And from a romance point of view, I felt like we didn’t get to experience as much as we could have. There are multiple points of view primarily to keep us interested in future Associates books and, I suppose, to provide more insight on the role of The Associates.

But the pleasure in this book is that it’s truly different yet not which is what we all want right? The word play is a joy to read and Peter and Laney are a perfect match. You can see them together decades from now enjoying just hearing the other talk and parsing out the meanings of words exotic and mundane.

As an aside Laney’s lyrics about the mundane reminded me of Lisa Loeb. B