REVIEW: Miracle on I-40 by Curtiss Ann Matlock

Dear Ms. Matlock,
One of the first books I read when I was getting back into romance was one of yours: “If Wishes Were Horses” which I think helped cement my interest in more working class/down to earth characters. This is another one which starts evocatively with the image of a hard working people at a truck stop restaurant.

“It’s the time of day when the coral sun gives way to a satin starry night. The huge letters of Gerald’s Truck Stop have started to glow bright red in the darkening desert sky along Interstate 40, which cuts right through Albuquerque, New Mexico. The sign serves as a beacon for weary truckers trying to get in as many hauls as possible before Christmas Day, and for frazzled families making the long trek home to Gramma’s house, and for footsore mothers needing respite at the end of a long day of searching out the perfect gifts. Big eighteen-wheelers chug in and out of the wide fuel bays, while minivans and sedans stop at the gas station, and speakers up above each reverberate with Christmas carols.

The fluorescent lights of the restaurant shine out from the wide windows, promising warmth from the scene inside. Steam rises from the coffee maker, and the bubbling punch machines give off a rather cheery yellow and red glow. Lights twinkle on the small plastic green tree at the end of the counter, and brightly colored piñatas hanging from the ceiling sway a bit whenever the front doors are opened.” 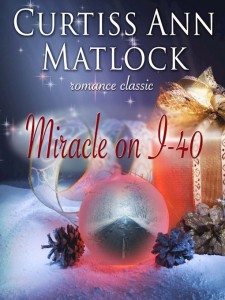 This is the world in which Lacey Brant finds herself eleven years after she fled her parent’s house following an argument about her unwed pregnancy. In the time since, she’s gotten married, had two children, discovered the man she thought she loved didn’t have it in him to be a husband and father then found herself alone. But she’s done alright for herself. She has a job, friends, repeat customers who appreciate her efforts to make their meals satisfactory and is managing to raise her children right. But this year she’s planned something daring, something that scares her a little and she’s not sure things will work out as she hopes they will. A trucker friend has offered to take her and the children cross country for a surprise reconciliation with her parents over the Christmas holiday. Only the friend is injured and another man is pressed into the task. A man who has known Lacey in her job for years but who knows little about her personal life.

Cooper drives a big rig and despite his initial hesitation to accept the job his friend Pate asks of him, he finds himself looking forward to not being alone as he usually is. What he doesn’t count on are two young children and the trip begins badly. But somewhere along the way, a bond begins to develop between this quiet, taciturn man who has no family and hasn’t wanted any and a woman and two children who are unsure of the welcome that lies ahead.

It’s only a three day trip there and I was unsure as well that a satisfactory love story could occur but one did. Slowly, gently Cooper thaws in the presence of children he didn’t think he could relate to and a woman who wasn’t looking for anything more than transport. Towards the end of the book, Cooper realizes that he does know Lacey.

“Memories marched across his mind of about the one hundred times over the past few years that he had gone into Gerald’s and Lacey had greeted him and served him his meal. She always smiled at him and asked how he was. He most generally answered, “Fair to middlin’. And you?” She would say, “Better than I ought to be,” in that chipper way and with that smile that lit up the room. She brought him everything just the way he liked it, waiting until his coffee cup was nearly empty before filling it again, telling him how the chili or the steak was that day. He had seen her cut her hair short and grow it out. He had seen her a hundred times plug coins in the jukebox, playing snappy tunes by Alabama and dancing across the room, and when she seemed melancholy, an old ballad by Don Williams to which she would hum. He had seen her habit of tucking her hair behind her ear, and the graceful way she walked, and the extra care she gave people.

It struck him that while he had not known particulars such as about a husband or children, he did know the woman. He didn’t know what to make of that thought.”

But the easy, pat road to a HEA is avoided. There are starts and stops, smooth stretches and icy ones and I like the way the main story ends with both Cooper and Lacey willing to take a chance on what they might have rather than starry eyed and rushing into something too soon. The book is like a gentle sleigh ride through the snow, wrapped in a warm blanket with someone think you might love rather than a roller coaster blitz through smexy to an out of breath ending. It takes me back to the joy I felt reading that book of yours years ago and rediscovering romance novels. B
~Jayne