REVIEW: Mardie and the City Surgeon by Marion Lennox

The last person Mardie Rainey expects to see on her doorstep is her childhood sweetheart, Blake Maddock. Fifteen years ago, Blake Maddock had walked away, leaving her teenage heart sore and broken. But now—with a thunderstorm raging overhead—she can’t turn him away, nor the injured border collie in his arms….

Blake Maddock spent his life running from one tragic mistake… Now the frightened boy has become a formidable man—and he’s coming back for the woman he has never forgotten…. 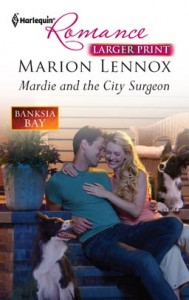 Recently I met fellow DA reviewer Sunita, which was a blast, and as book lovers do, of course we talked about books. We agree that one of our least favorite tropes is the “I kissed you once 10 years (or more) ago and have never forgotten it nor moved on with my life.” Argh, I hate this. So imagine my happiness when you made it very plain that Mardie hadn’t waited and faded away, she hadn’t lived in stasis since Blake left. She’d loved another man, married him, had a good and satisfying life before losing him. She still loved him in a way that was all his though there was room in her heart for another. Yeah, that’s another trope I dislike: the “I’ve loved and lost and will never love again!” Hate that too. Thank you for this.

I seriously enjoyed the sections about the dogs. They are such a part of these peoples’ lives that a story without them would feel incomplete. The parts with Charlie and Bessie working again and later at the funeral had me almost bawling. Would have had I been home but I had to hold it together at work. Still these are lovely scenes of how much dogs love and are loved and love to be useful.

Another wonderful thing about the story is that when Blake returns fifteen years after he left and shows up at Mardie’s door, she doesn’t turn into mush – well, perhaps for a minute in surprise but then she gets over it. And lets Blake know that she hasn’t wrapped herself up and mourned his loss all this time. He left, she was sad but then she got over it. She moved on. She’s lived a successful life and hasn’t thought about him or wondered about him. She took her passion for art and has made a name for herself as well as finding happiness teaching arts courses. I was bouncing in happiness through all this. Oh, and I loved it when she called him on how he viewed her life since she hadn’t gone overseas and saved children’s lives. And even after Blake makes a half hearted and emotionally induced proposal, she is wise enough to turn him down because she knows it’s still all wrong. Yeah, Mardie!

It’s wrong and Mardie insists that it be right. She probes Blakes’ reasons for not wanting to stay in Banskia Bay, she offers encouragement and mentions the therapy that helped her past the loss of her husband but she doesn’t push it or make ultimatums. She – and Blake – realize that neither will be happy trying to make a marriage work at their present stage. Yes, this takes the story down to the wire but I needed for them to work all this out to their satisfaction before I’d believe in their HEA.

And Blake does have some serious issues in his past. Some screwed up parents and a guardian aunt who wasn’t much better. Again I appreciate that this isn’t just a pity party on his part but some deep seated emotional mess that goes back a ways and must be dealt with. The way you described why he had to leave Banksia Bay and why he never contacted Mardie makes sense. He needed to leave this place that he saw as an exile where his parents sent him and if he’d talked to or written to Mardie, he wouldn’t have been strong enough not to crumble. When Mardie is finally given a window into what has driven Blake all these years and what still continues to haunt him, she knows these are things she might be able to help with – a little – but she can’t solve them for him. Nothing gets papered over or shoved under a rug with these two. They hurt each other somethimes with what they say but no punches get pulled and I like that.

Blake’s reasoning about why he needs to leave Banksia Bay and Mardie now also makes guy sense – he’s afraid he’ll hurt her by getting involved while he’s there – and planning to leave. It’s here that I can sort of see the start of his change of heart. Before, he’s wanted to leave to escape bad memories or to in some way make up for his twin’s death but now, emotion for Mardie is starting to seep through. I like that the time frame of the story allows for these slower shifts in emotion since there’s a lot to be dealt with and sorted out. Over the course of fixing Bessie’s eyes and the fund raising dinner and the month long recovery needed for the dog, Blake gets time to think and time to slowly see Mardie and Banksia Bay not as escapes anymore but as a person and a place that are home to him. There’s also the fact that they still have that connection they had years ago of being able to tease each other and almost know what the other is thinking that they’ve never lost.

Their ultimate realization that they’re both ready, willing and in an emotional place to finally get together for good is sweet and gentle and plays out in a way true to the setting of the story. Thanks for another enjoyable excursion with these salt of the earth people – and their dogs! B