REVIEW: I Have a Bad Feeling About This by Jeff Strand 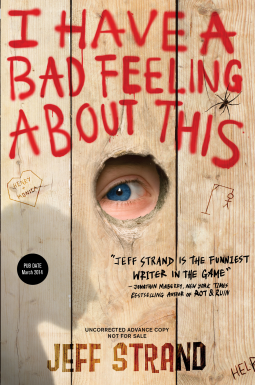 Everything 16-year-old Henry was dreading about survival camp turns out to be true—or even worse. The only thing to help get him through is his equally unathletic best friend Randy and the discovery of a girls’ music camp just down the path. But they’ll soon have a lot more than obnoxious “drill counselors” and too many push-ups to worry about. The owner of Strongwoods Survival Camp has taken out some loans with very dangerous men to keep himself afloat, and when a trio of them show up to collect, things go bad. Very bad. With a camp now full of armed killers, survival now has a whole new meaning for the campers…

After last year’s wonderful “A Bad Day for Voodoo” YA zombie book, I wasn’t exactly sure what to expect from you. More zombies, fewer zombies, no zombies at all, some other paranormal beings, or just goons with guns? I couldn’t wait to find out.

Let me say that as one of the least coordinated, least athletic people in my school while growing up, I feel Henry and the Boys’ pain. They’re my people. I was pulling for them all the way. That being said, I also felt for Max as he tried to instill the barest rudiments of survival skills into them. If the man had had any hair when the camp started, he’d have yanked it out in frustration by the end. But as the final results of goons with guns vs campers – and bear – shows, hey, Max actually did it!

I love the “Hunger Games” references and the fact that Henry shows some mad skills with a bow and arrow, well at least until that final shot that he took but then, they can’t all be winners, right? Also, it’s awesome that the boys end up saving themselves but not with any sudden, out of character, “where did these skills come from?” skills. They’re not amazingly faster, or stronger, or more coordinated but they pull out bravery, determination, cunning and sheer will to save the day.

Adding Monica as the intrepid, fearless one among them is fantastic. A female character who is cool under pressure, not afraid of guns and can improvise with the weapons at hand earns major bonus points from me. Heightening the tension of one scene by inserting a mild marital disagreement between Henry’s parents in the classic “fine” tradition – was sheer brilliance.

So the ending was a little out of control and the villains a little 1970s Disney movie inept but the reality is still more believable than the Hollywood action movie. Though the movie would be really cool with the motorcycle chases and Monica riding backwards on one to shoot at the bad guys chasing them before the collision that sends them all airborne before the final ass kicking.

Thanks for another funny entry into your oeuvre that I know I’ll want to reread at some point. One question – now that Henry, Randy and Monica are leading the Survival Camp, will they do the cricket eating thing? Oh, and I’m writing down all the Wilderness Survival Tips because I’m sure one day they’ll save my life – probably when I’m in my suburban backyard, in a lounge chair on my deck. B