In honor of the Olympics, we are reposting some sports books this week.  McLinn actually has an Olympic book called “The Games“.  Jane has read it and will review it tomorrow.

The first book of yours I read, “Widow Woman” made a very good impression on me. Then Jane read one of your contemporaries, “The Rancher Meets His Match” and it also scored a good grade. When I discovered A Writer’s Work publishing group which reissues older books and publishes new works at a significant discount and realized you are one of the authors it seemed like a perfect time to check out some of your other books. 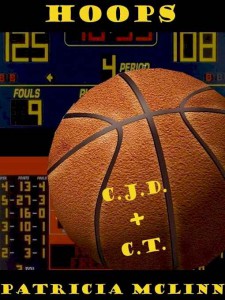 Carolyn Trent’s logically mapped journey to becoming the perfect professor of English was hijacked the day she became academic advisor to the Ashton University men’s basketball team. The hijacker was C.J. Draper, the team’s infuriating, irreverent and sexy new coach.

C.J. has never let adversity stop him – if he had he’d never have gotten this far. He’s not about to start by letting Professor Trent derail him. If he chose to rattle her ivory tower it was just for the fun of seeing the fiery woman beneath the marble-cool exterior . . . wasn’t it?

When logic clashes with ambition in the game of love, will anyone win?

College basketball is my favorite sport to watch so picking “Hoops” to try was a no-brainer for me. After finishing it, I can see why it was a RITA finalist. Carolyn Trent starts out as a slightly buttoned down ivory tower woman. The university environment is about all she’s ever known and where she feels most confident and comfortable. C.J. Draper’s casual attitude towards everything she holds dear ticks her off and raises her hackles. Ashton University has always stood for excellence in academics and Carolyn isn’t about to let its standards slide just to get a winning basketball team.

With the almost yearly graduation ratings of shame for some of the top programs in men’s Division I basketball, I can easily see where Carolyn is coming from. And for someone whose whole life is wrapped up in academia, it makes sense for her to resist the school’s decision to return to top division play. But it also seems realistic for her to take her assignment seriously and as a natural teacher, try to do the best for these players who are also students.

On the other hand I can see C.J.’s almost single minded drive to take this tiny program, turn it around and use it as a springboard back into the big time. He’s been a pro player, he knows the perks and attention that goes with that level of the game. But as his friend and former team mate Rake tells Carolyn, C.J. is also a person who is almost compelled to help others. So his emphasis on teaching his players how to think their way through a game rather than just following his orders and as well as his, albeit sometimes reluctant, relinquishment of his team to Carolyn’s mandatory study halls so they can keep their grades up seems a part of his personality.

I like how you show both Carolyn and C.J. at their jobs. Carolyn has just been to a prestigious academic seminar and works at writing papers to be published. C.J. religiously watches scouting tapes and games or can be found imparting his playing wisdom to his team. It’s also fun to watch Carolyn being converted to a true fan of the game and see C.J.’s realization of how well thought of she is in academia. And while the progression of the Ashton Aces in what is obviously the NCAA tournament seems amazing for such a small program, the event thrives on Cinderella teams who come from nowhere to take down the big boys.

The progression of the conflict between Carolyn and C.J. climaxes in a believable way and makes sense. This isn’t some made up, last minute, gotta pad the page count event. But Carolyn and C.J. also each have a personal issue that needs to be dealt with. I think you handle Carolyn’s better though. Hints were dropped about “something” in C.J.’s past but even though it ends up making sense, it still seems to go from 0 to 60 in too few pages for me to feel totally comfortable about it. I do like that though Carolyn and C.J. are each willing to help the other and support each other’s resolution of their individual conflicts, that resolution comes from within for them rather than relying solely on the other.

I enjoyed “Hoops” and my time with Carolyn and C.J. The game is covered well though I don’t think readers have to come to the book with either advanced knowledge of nor love of the game to enjoy the story. And with the bargain price you’re charging for it, I think it’s a great place for people to dip a toe in your backlist. Oh, but one thing I need to add is that there are some edits left in the file. Not enough to ruin the reading experience but definitely something which should be looked into.