When I was at BEA this year, many of the conversations began with “what are you excited about” and to nearly every person I said “Pushing the Limits” by Katie McGarry. My interest was piqued when I came across the cover and title of this book when adding to the new releases site.. This book began my hunt for more New Adult stories. Even though Echo and Noah are seniors, the issues that they were dealing with were ones that I, many years passed, could identify with. They were on the cusp of their adulthood and for Noah, maybe already an adult based upon how life had formed for him.  Echo had to resolve the issues of her past before she could look to the future.  She was too scared to pursue her dreams because they were wrapped up in fear.  The story unfolds, narrated by both characters in alternating first person. 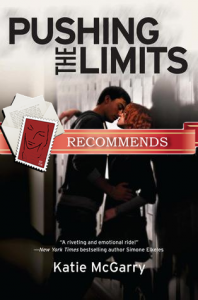 Noah and Echo meet in Child Protective Services mandated counseling. Noah because he is trying to win the right to have visits with his brothers who have been separated from him for two and a half years because “[p]eople with my labels weren’t allowed to live with other minors” in the foster system and Echo because of a trauma so serious that she has lost a part of her memories. Noah is a good kid turned bad boy. He really isn’t a bad boy but he’s generated a bad attitude and a certain disdain for authority. Noah’s parents both died in a car accident leaving behind Noah and his two younger brothers. Noah was only 15 at the time and with no family to care for them, the three were shuttled into the foster care system. When he saw his first foster father beating the father’s biological son, Noah stepped in to defend the child but because the altercation was physical, Noah was labeled a problem child in the system. His two brothers were moved to a different family and Noah had a hard time finding a decent home.

Noah’s entire goal is to get a job and his brothers back. To do that he must prove to CPS that he is a fit person to care for his brothers.

Echo lost her beloved brother in Afghanistan. Something happened between Echo and her mother, something bad but Echo doesn’t remember. She only knows that she is not to have contact with her mother. There is a restraining order. Her mother may be in prison. Echo has numerous scars on her arms, so embarrassing that she wears long sleeves and gloves. It isn’t the scars that are embarrassing but what they represent and how they’ve caused people to interact with her differently. Her friends want the old, popular Echo back, not the moody, unhappy one that has to go to CPS therapy.  “The rumors about why I was absent for the last month of my sophomore year ranged from pregnancy to rehab to attempted suicide. My gloves became the kindling and my memory loss the match. When I returned that fall, the rumors exploded into a firestorm.”

Noah and Echo’s first meeting is inauspicious with Noah eyeing her up and trying to get under her skin for the fun of it and Echo rocketing back:

Not a cinnamon roll in sight, but damn if she didn’t smell like one. We had several of our main courses together and last semester one of our free periods. I didn’t know much about her other than she kept to herself, she was smart, a redhead and she had big tits. She wore large, long-sleeved shirts that hung off her shoulders and tank tops underneath that revealed just enough to get the fantasies flowing.

Like always, she stared straight ahead as if I didn’t exist. Hell, I probably didn’t exist in her mind. People like Echo Emerson irritated the crap out of me.

“You’ve got a fucked-up name,” I mumbled. I didn’t know why I wanted to rattle her, I just did.

“Shouldn’t you be getting high in the bathroom?” So she did know me.

“They installed security cameras. We do it in the parking lot now.”

“My bad.” Her foot rocked frantically back and forth.

Good, I’d succeeded in getting under that perfect facade.

Her foot stopped rocking and red curls bounced furiously as she turned to face me. “How original. I’ve never heard that before.” She swept up her backpack and left the office. Her tight ass swayed side to side as she marched down the hallway. That wasn’t nearly as fun as I’d thought it would be. In fact, I kind of felt like a dick.

While I liked Echo and grieved for the loss of her brother; understood her confusion and displacement with her father marrying the family nanny who has a new child on the way; and sympathized with her longing and fear toward her mother, it was Noah that stole the book. His goals are simple but hard to execute. What he wants to achieve is faced with numerous obstacles, not the least of which that he only gets supervised visits with his brothers and his youngest brother seems to be starting to forget him.

There is wonderful nuance in the story in part because Noah and Echo are unreliable narrators but not in a way in which you feel like they are lying to you or that the story they are telling isn’t accurate.  The unreliability factor comes in when Noah and Echo are relating their perceptions of the people around them.  Noah’s been shafted by the system, but the book shows that there are good and bad foster parents.  Echo’s opinion of her stepmother range from the blonde bimbo to someone who did provide love and protection to Echo, just not in a way that she wanted or recognized initially.  There was no kumbaya moment for Echo and her stepmother, but a more cautious acceptance.  Echo’s friends are not wholly good or bad either, just young and unsure how to deal with the shifting landscape of power players in high school. Their identities are built on a certain social structure and Echo’s movements within that structure are baffling them.

And Noah and Echo’s own interpretation of the other is just as unreliable.  Echo views Noah as a drug using, girl using jerk.  Noah views (well, see the point of view above).  But as the two get to know each other, they become each other’s biggest defender, the first one each turns to.

At the end of the book, I believe in their HEA.

[spoiler]It’s not sunshine and roses.  They both recognize that there is a lot of hard work ahead of them in terms of working through issues, but they had made a commitment to do it together. [/spoiler]
A word about the sexual explicitness in the book. It was there, although there is no intercourse Noah has a frank appreciation for Echo and Echo’s body.  There is a small subplot in which Echo’s old boyfriend was pressuring her to have sex and I loved the presentation that Noah not only wanted Echo but was willing to wait until she was ready. They had all the time in the world.  For a young girl, I think these types of presentations are so positive – that the right guy is willing to wait; that you as a girl are worth the wait. B+
Best regards,
Jane

First P.S. I know this book is expensive but I hunted down a Kobo coupon code for 40% off which brings the book down to a little over $6.00:  thankyou40. Book should be available on Aug 1 at Kobo.

Second P.S. When I was at BEA this year, many of the conversations began with “what are you excited about” and to nearly every person I said “Pushing the Limits” by Katie McGarry. There is kind of a fun story about how this book got into my hands. I first noticed the book when I was working on the new releases site. My attention was caught by the cover and the blurb. I mentioned that I had to see about obtaining a copy to read. The few goodreads reviewers at the time talked about how much they loved the kind and caring hero in the story. I love kind and caring heroes. We do not see enough of these guys in our genre.

Angela James saw my tweet and sent an email to me introducing me to Natasha Wilson and TS Ferguson of Harlequin Teen. From there I received an introduction to the editor of the book, Margo Lipschultz. Lipschultz also acquires and edits books for HQN (adult romance line). While they offered to send me a paper arc, I wanted to read a digital copy and said I would wait until the digital arc showed up on NetGalley. I’m 50% more likely to read an ARC in digital form than paper.

Then a few weeks later, Sarah Wendell forwarded me an email from Jayne Hoogenberk who had just finished prepping a trailer for the book, was on goodreads and saw that I was excited to read the book. (I had put something in the update status like “who do I have to kill for a copy of this book”). Luckily no one.

I just thought it was neat how every one at Harlequin was so excited about this book. In fact, when I took my tour of Harlequin NY offices, many of the staff had read the book from editors to the rights handlers and all were excited about it and rightly so.

My email exchange with Jayne Hogenboerk after I had opened the book:

Oh no. I just finished the end of Noah’s first scene and my heart already aches for these two.