What Janine is reading: SFF read in 2019

A spaceship crew of six clones wake up in a cloning vat missing twenty-five years of memories. Of their much older previous incarnations, five are dead and one is comatose. Additionally, the spaceship has changed course. It quickly becomes apparent that one of the clones tried to kill the rest, but not who it was or why. To figure out the identity of the killer they must work together, but how can they cooperate when all of them are under suspicion? 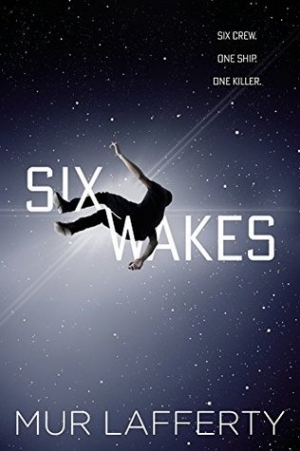 This book is told partly in flashbacks that introduce us to each of the main characters years before they go on the mission, and we learn their lives are interconnected in ways they may not be aware of themselves. The crew are almost all criminals whose records are sealed. They were all promised a clean slate upon their arrival at the distant, not-yet-settled planet that is their destination.

The novel has some copyediting errors. Most of the characters weren’t that likeable and the characterization was on the thin side. But the book still kept me and my husband up late because the plot was so good. It’s a terrific mystery and I was uncertain who the killer was until the end. It’s also firmly in the hard SF genre in that it deals with cloning and other bioengineering technologies. And of course, it takes place on a spaceship.

The characters are diverse (Latinx, black, Japanese and disabled people are all represented here), and there are four female characters as well. In addition to the six clones we also get to know the ship’s computer, with its quirky personality, and the wealthy woman who financed the journey. I purchased the book because it was a finalist for three awards: the Hugo, the Nebula and the Philip K. Dick award. The novel is taut and suspenseful. The plotting is good but since I wanted deeper characterization, I’m giving it a B/B+.

Gideon the Ninth by Tamsyn Muir

Gideon Nav is a queer eighteen-year-old orphan who longs for adventure. The bleak planet on which she resides, called the Ninth, is ruled by the Ninth House in the galaxy. It’s an outpost as far from the center of important events as it is possible to be. 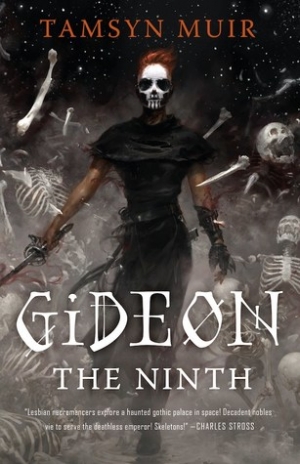 In childhood Gideon’s only companion was Harrowhark Nonegesimus, the heiress to the Ninth House. Harrow is now seventeen and the leader of the Ninth House, although that fact is unknown. Harrow’s parents are thought by most of the Ninth’s inhabitants to be alive but in reality they are reanimated corpses. Harrow is skilled necromancer. Since Gideon is aware of this secret, Harrow will not allow her to leave the Ninth.

Harrow and Gideon have been at each other’s throats since childhood, but an opportunity arrives for Harrow to become one of the emperor’s close allies and she can only accomplish this by teaming up with Gideon. To win her freedom from the Ninth, Gideon will do almost anything, including put up with Harrowhark.

Gideon is as adept a swordswoman as Harrow is a necromancer but for Harrow to ascend they have to compete against equally talented teams. The competition takes place in a dilapidated mansion on a watery planet, once home to the First House. The contest is a dangerous one. To win, Gideon and Harrow will have to put aside their contentious past as they explore what may or may not be a haunted house. And that’s before one of their rival necromancer-and-cavalier teams are murdered.

The worldbuilding in this book makes no sense whatsoever. Technology is advanced enough to allow for spaceships but the only weapons the characters use are sabers and swords. Despite the elements of science fiction, the world seems more fantastical than real due to the necromancy. Gideon’s snarky, humorous asides feels like something out of UF, and of course there is the murder mystery, so that is yet another genre in the mix.

It took me until 20% in to get past all the “I hate you” bickering and I thought about quitting throughout that section. But after that the book became terrific. The plot turns were exciting and surprising. I didn’t anticipate anything that happened and the growing rapport between Gideon and Harrow absorbed me.

The ending was befuddling, however. Is it a cliffhanger or isn’t it? I wasn’t sure. Some things were left up in the air but it was hard to work out whether Gideon’s arc is complete or if we’ll see more of her in book two, Harrow the Ninth. I also expected a romance to develop between Gideon and Harrow but this book has an enemies-to-friends arc instead. I liked that, though. The scene in which Harrow confides her greatest secret to Gideon was wonderful. This one earns a B-.

The Ten Thousand Doors of January by Alix E. Harrow

This is an epistolary portal fantasy novel about January Scaller, a biracial girl. The story begins in 1901 when January is seven years old. Her father works for a wealthy gentleman, Mr. Cornelius Locke, and he travels around the world to find unusual artifacts for his benefactor. While he travels the world, January is raised by Mr. Locke. 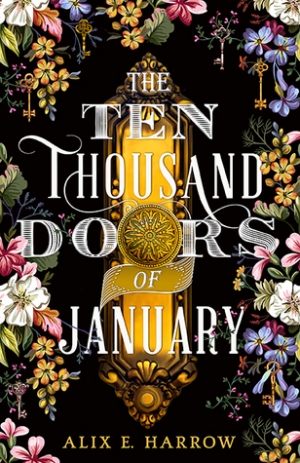 At age seven, January finds a doorway to another world, but she returns to our own world quickly. When she tells Locke about it, he chastises her for lying. The next day she tries to go back but the door has been destroyed.

January’s world soon becomes circumscribed by a rigid governess Locke hires for her. As she grows into a teenager who seeks Locke’s approval, she learns to “behave” and loses much of her autonomy and agency. But she has friends, including Samuel Zappia, the son of the local grocer; Bad, a big and loyal dog Samuel gives her; and Jane, a Kenyan woman whom her father sends to replace her governess.

January also has a book that she found in a box where someone leaves toys and keepsakes for her. The book is titled The Ten Thousand Doors. It explains that there are doorways into other worlds and also serves as a romantic story-within-a story about a girl named Adelaide Lee Larson. As January’s situation becomes more dire, she begins to wonder if it is possible for her to escape into a different world.

The Ten Thousand Doors of January is foremost about freedom and confinement, and about the way books can expand our world and open up new vistas for us. There’s so much to love here, from the endearing characters to the two romantic pairings to the worldbuilding. The latter includes both accessible fantasy world settings and the America of the 1870s to the 1910s (a time of technological innovation and social upheaval). However, I had some issues.

First there’s the language. There are a lot of metaphors and similes. Take these two paragraphs:

I found it on the raggedy western edge of Kentucky, right where the state dips its toe into the Mississippi. It’s not the kind of place you’d expect to find anything mysterious or even mildly interesting: it’s flat and scrubby-looking, populated by flat, scrubby-looking people. The sun hangs twice as hot and three times as bright as it does in the rest of the country, even at the very end of August, and everything feels damp and sticky, like the soap scum left on your skin when you’re the last one to use the bath.

But Doors, like murder suspects in cheap mysteries, are often where you least expect them.

This style of language is too showy for me. At one time I loved this kind of writing but nowadays I prefer more spare prose that doesn’t pull my attention away from the characters and their journey to this extent.

Second, I could see the three major twists coming so there were very few surprises. Each development heavily foreshadowed the next.

Third, the book’s message (that barriers are forms of oppression and tyranny, and must therefore be cracked open, and that books have the power to do this), while laudable, was a heavy and unsubtle drumbeat.

Except for one minor character, a harsh nurse who nevertheless comes to January’s aid, every character is either good or bad, with no shades of gray. And with regard to one of the characters, this was so obvious that I got impatient while waiting for January to figure it out. When the big reveal came, very late in the book, it added almost nothing to what I already knew. This combined with the heavy foreshadowing made me feel that January clung to her illusions past the point of sense.

All in all, I’ll give this one a B-, mainly because it combines ingredients I love: historical settings, fantastical portals, a story-within-a-story, epistolary elements and endearing characters. And because I loved the dog.