REVIEW: Who Ate the First Oyster? : The Extraordinary People Behind the Greatest Firsts in History by Cody Cassidy 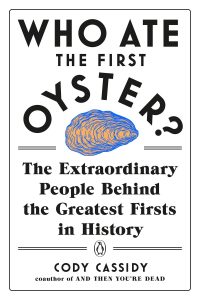 Who wore the first pants? Who painted the first masterpiece? Who first rode the horse? Who invented soap? This madcap adventure across ancient history uses everything from modern genetics to archaeology to uncover the geniuses behind these and other world-changing innovations.

In this book, writer Cody Cassidy digs deep into the latest research to uncover the untold stories of some of these incredible innovators (or participants in lucky accidents). With a sharp sense of humor and boundless enthusiasm for the wonders of our ancient ancestors, Who Ate the First Oyster? profiles the perpetrators of the greatest firsts and catastrophes of prehistory, using the lives of individuals to provide a glimpse into ancient cultures, show how and why these critical developments occurred, and educate us on a period of time that until recently we’ve known almost nothing about.

I love a catchy title and will admit that is what caught my attention and made me sit up and read the blurb for this book. “How could we ever know who …?” crossed my mind but this is not a speculation on exactly which human being – or in the case of who invented inventions – which Australopithecus did the first of these many things. Instead it’s all about looking at historical evidence, paleo-anthropological best guesses,and paleo-zoological discoveries (“We’ve hit a gold mine of horse manure!”) among others, that allow Cassidy to drill down to when, where, and why “the first” something might have been done, tried, or thought of.

Using the PIE words for axles and wheels and seeing how widely spread those are in modern languages allows scientists to be fairly sure that the fantastic invention of wheeled vehicles swept across Europe and Asia from the Steppes within a few generations. Discovering how to guide and (more importantly) put the breaks on horse back riding – which allowed hit and run attacks – forever changed static village life as the explosion in historical walled towns attests to. Ancient Mesopotamian jokes took ancient writing beyond just tax records and might have paved the way to write the “Epic of Gilgamesh.” The amazing navigational abilities of ancient Polynesians crossed with a scientific examination of winds and currents show that the discovery of Hawaii was no accident but the result of planned exploration.

The chapter on smallpox, however, really grabbed me as it eerily discussed how a possible mutation might have developed a super virus that swept through humanity, causing untold death and misery for millennia. Honestly I don’t mean to focus on books with viral/bacterial pandemics during the current COVID crises – they just seem to follow and find me.

Some of these speculations are more speculative than others but there is a surprising amount of evidence to back up the possibilities given of what type of person might have been the first to do things that forever changed our species and our world. Very interesting and something to spark further investigations online. B+