REVIEW: This is How You Lose the Time War by Amal El-Mohtar and Max Gladstone

One look at this 209-page time-travel novel’s blurb and I had to preorder it, so I’m reproducing that blurb here: 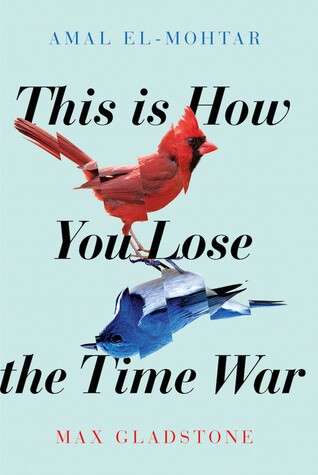 Among the ashes of a dying world, an agent of the Commandant finds a letter. It reads: Burn before reading.

And thus begins an unlikely correspondence between two rival agents hellbent on securing the best possible future for their warring factions. Now, what began as a taunt, a battlefield boast, grows into something more.

Except discovery of their bond would be death for each of them. There’s still a war going on, after all. And someone has to win that war. That’s how war works. Right?

Red and Blue are agents on opposite sides of the same time war. Each side wants to impose its own vision of utopia on the world. Blue and Red have lived for centuries and have the ability to travel back and forth in time to a variety of possible versions of both the past and the future, and they use the ability to try to influence the main timeline to suit their side’s vision of their shared world.

Each of them is the most creative, intelligent and dangerous agent for her side of the war. Each plunges into a correspondence with the other, and for the longest time the reader doesn’t know if the love she eventually professes in these letters is real or a ruse.

Red works for the Agency, an all-powerful society with advanced technology. There is little comfort in her world of imposed order, unforgiving discipline, and a mind that makes it possible for even her thoughts to be infiltrated.

Blue works for Garden, at a quick glance an equal and opposite society, where technology is biological rather than digitized or mechanical, where growing things are prioritized and harmony with the living world is first, not second, nature.

Yet Blue’s world is no less inimical to a romantic relationship between Blue and Red than Red’s world. And when the love affair begins, it threatens not only their relationship, but also their lives.

What can I say about this marvelous little book? Readers are dropped into the world of the book with few explanations and have to figure out how story and world fit together. This didn’t bother me; in fact I often prefer this technique to info-dumping.

This epistolary novel (told in third person present tense narration as well as in letters) has terrific worldbuilding that places it above most time travel books, but it’s the star-crossed love at its heart that makes it so potent. It’s impossible to divide these two aspects, though, because each is dependent on the other—both characters are products of their societies, indeed, the pinnacle of the type of agent each society can produce, and so every exchange of letters between them reveals more and more about their worlds, and about the forces that have shaped them.

The more I learned, the more caught up I became in their burgeoning love. The more caught up I was, the more I worried that either Blue or Red might be exposed to her leaders, that one of them would betray the other, or that the whole thing was a con, a trap on the part of either Red or Blue from the beginning.

The story made it clear how much was at risk (both ways of life and lives). Every letter was fraught with tension. I won’t spoil whether or not they both survive since to do so would take a lot away from the book. I think it’s best to go in knowing as little about that as possible.

The letter exchanges were very creative; these characters, centuries into their lives and not quite human, used their immense abilities to write letters in burning paper, in water bubbles, and in other strange mediums. Their increasingly creative methods of letter-sending were not only surprising and fascinating, but also romantic, because each letter was a gift. Not only a gift of words, but also a gift of form.

As the characters travel up and down strands of time, we glimpse fun permutations of our own history and a variety of cultures. To readers wondering about the novel’s diversity beyond the book’s queer aspect, Blue is dark-skinned, though Garden is the only specific cultural background mentioned for her, as is the case with Agency for Red.

Historical figures and events figure in the story, and these are usually given an alternate reality twist. There are also allusions to fairy tales, myths, Shakespeare and other literary works. Oh, and did I mention there’s humor, wit and wordplay too? I enjoyed all that.

At first I was distracted by the detailed and lyrical language, so my initial appreciation was more intellectual than emotional, but halfway through, Blue and Red’s story became piercing on both levels. Despite the fact that they could not meet in person, the love they wrote of, whether real or merely part of a long con game, read as utterly convincing.

I have just one major criticism:

Blue and Red are both loners, and that’s necessary for the book to work. But one consequence of that is that we don’t see either of them grieve for friends and loved ones killed in the war. There would be a very different story conflict if we had seen that, so I’m not arguing that the authors made a mistake. But this made the battles seem closer to strategic exercises or skirmishes than to bitter losses or uneasy victories.

My other criticisms are minor: the romantic emotions developed quickly and a time paradox left me a little confused. But the high stakes made this short book pack a dizzying punch. B+/A-.

→ Janine
Previous article: REVIEW: The Spitfire Girl by Fenella Miller
Next Post: Reading List by Jennie for July through September