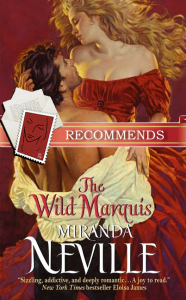 The Wild Marquis begins with a murder. Joseph Merton’s murder. Joseph is a bookseller, and he is swaying while approaching his room at an inn, having celebrated the acquisition of an important document hidden in a collection of books with a couple of drinks, when he opens the door to find his books strewn and himself facing a familiar man who immediately knifes him and leaves him bleeding to death.

The story then shifts forward a year to a book auction at Sotheby’s. The late book aficionado Thomas Tarleton’s collection of books is up for sale, and according to the catalog, the most valuable in the collection is the illuminated French manuscript known in English as the Burgundy Book of Hours.

The Marquis of Chase entered Sotheby’s after seeing a handbill bearing Tarleton’s name. Although the name Tarleton rings a bell in his mind, the marquis, whose close acquaintances call him Cain after his other title, is puzzled by the Burgundy manuscript’s presence in Tarleton’s collection. For years, it was among his family’s prized possessions. His deceased father would not have willingly parted with it, and Cain had therefore believed the book belonged to him.

Not only does Cain feel possessive of the manuscript, he believes that if he can learn how Tarleton came to own the book, he will also learn his late father’s secrets and thereby gain a way back into his mother and sister’s affections.

As a teen, Cain was cast out of his parents’ household and had to find a way to survive. He was taken in by prostitutes who found him mugged on their doorstep, but his religious parents and even his less devout but very proper aunt were so shocked by his presence there that they refused to have anything to do with him. The rest of society soon followed suit. His father could not keep Cain from inheriting the title and fortune after his death, but his mother has shut him out of her life and his sister’s.

Now Cain misses the women in his family, and longs for a modicum of social acceptance. Following the instinct that the Book of Hours may unlock the mystery that was his late father, he questions Lord Hugo, a bibliophile, on the subject of the book. Hugo doesn’t know how Tarleton acquired the book but when Cain mentions that he himself is interested in purchasing it when it is auctioned, Hugo recommends that Cain seek advice from a knowledgeable bookseller and recommends one J.C. Merton for the task.

What Cain doesn’t know is that J.C. Merton is Juliana Merton, the widow of the murdered Joseph. Juliana also has a painful past, and now that her husband is dead, she is struggling to make a go of the book business since many book collectors don’t give female booksellers the same credit for expertise that their male counterparts get.

Lord Hugo is an exception, and when Cain turns up on Juliana’s doorstep, he proves to be one as well. Juliana is excited by the opportunity to help a wealthy, titled customer bid on such an important manuscript, because if she does so successfully, such a coup could help her gain many more customers. If she can’t make a go of her business, Juliana may be forced to marry a fellow merchant who doesn’t appeal to her that much in order to survive.

Cain is attracted to Juliana and she is equally drawn to him. He learns of her interest in a Shakespeare Folio that is also part of the auction and she discovers that he has hidden facets. But Cain has never ruined a woman’s reputation before, and he doesn’t intend to start now. So it is almost a surprise to the two of them when they go to bed, and more so when they begin to fall in love.

Unfortunately, things become complicated after Cain receives a letter from his sister Esther that hints at her need of his help. Without more social polish, Cain will be unable to aid Esther, and Juliana is not appropriate wife material for a marquis. Can Juliana and Cain overcome the differences in their social backgrounds as well as their fears and vulnerabilities to find love?

While The Wild Marquis wasn’t perfect, I enjoyed it a great deal. As with The Dangerous Viscount, it took a while for my interest in the story to be engaged. In this case it was because at first glance the pairing seemed to be treading familiar ground – titled, wealthy, womanizing hero and respectable widowed heroine.

As it turned out, though, appearances were not quite what they seemed. Although Cain had been around the block, he wasn’t your typical rake in that he genuinely respected the women in his life, had not actually slept with some of them, and helped them when he could. Juliana’s secret past, which was only revealed partway through the book, made her a distinct character as well.

A couple of other problems kept me from adoring the book. First, I felt that Cain’s proposal to Juliana came rather abruptly, though I understood that there were reasons why he had to seek a wife. And he went from only reluctantly offering to marry her to desperately wanting her as his wife in what felt like the blink of an eye. I would have liked to see Cain reflecting on this change in attitude for at least a couple of paragraphs if not a page, because the brevity of this dramatic shift was so short and almost offhand, it took me a lot longer than it might otherwise have to catch onto the fact that he’d begun to view Juliana as The One, someone who fulfilled him as no other woman could.

Second, here was also a great deal of potential for depth of emotion in this book that I feel wasn’t fully utilized. I am a reader who loves to have my gut hit or my heart wrenched by a book. Neither this book nor The Dangerous Viscount did that for me, but I still enjoyed them both. Although the tone of The Wild Marquis is lighter than what I often prefer, I found the characters so endearing that I was only slightly disappointed at the lack of emotional intensity.

I liked Juliana and had a lot of sympathy for her and her situation. Without giving away spoilers, her childhood and her circumstances were far from easy, but hers were not the typical difficulties found in most romances. Juliana was also intelligent and not without some ambition. I really liked her, and I loved that she actually knew how to use birth control.

Cain was even more wonderful, and not just for superficial reasons like his good looks and his position in society. Not even just because of his own tough childhood (which was also atypical!). I loved his affection for people, especially women, and the way that it didn’t manifest simply as lust, but also as respect and a willingness to listen and to help. In Juliana’s case, Cain’s reactions went beyond his usual responses, to admiration and love, but even before that happened, he had already won me over with his warmth, decency and humor.

The world of London’s bibliophiles, booksellers and auctioneers provided a great backdrop for the story. The identity of Jospeh Merton’s killer’s was easy for me to guess at, but the mysteries surrounding Cain’s father and Juliana’s past stumped me and held my interest throughout. This was a genuinely touching novel because it was a story of two loveable people, both outcasts in their way, finding the acceptance, understanding and love they deserved with one another. B/B+.