I’ve enjoyed catching up with your Brothers Sinister series this year despite a persistent reading slump. For this reason, I preordered the newest book in the series, The Heiress Effect, about a month ago. When it popped up on my kindle, I started reading. 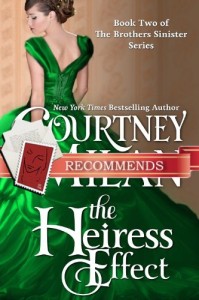 Jane herself is of age, but until her sister reaches her majority, Emily will remain in the dubious care of their guardian, Titus Fairfield, a man who has had Emily subjected to burns and near-drowning, all in the name of “curing” Emily’s seizures. Though Emily’s condition is hardly incapacitating, Titus treats her as a fragile flower in need of sheltering, and does not allow her to leave the house.

It falls to Jane—illegitimate but an heiress thanks to the fortune her biological father left her—to protect her legitimate sibling from Titus’s ministrations. So Jane remains under Titus’ roof and bribes doctors and quacks. She dresses outrageously and acts clueless while insulting any man who might otherwise have wanted to marry her. And she counts. She counts the days until Emily is free.

One day, the Johnson twins, so-called friends of Jane’s who whisper about her behind her back, mention that the gathering at the Marquess of Bradenton’s home to which Jane has been invited will include new guest, Oliver Marshall. Oliver is the illegitimate but acknowledged brother of a duke, and Jane fears he will pursue her for her fortune, so when they meet, she works extra hard at putting him off.

Little does she realize that she is the last woman Oliver would want to marry. Oliver has money that his brother settled on him, but what he really craves is power. Political power. For that he needs a less obtrusive wife, someone who would be viewed as a credit to him and would help people forget that he is illegitimate. This is not something Jane could do.

Oliver’s first impression of Jane is that she is socially completely inept, but well-meaning. When some of the men whom she has insulted as part of her act mock her, Oliver refuses to participate, or to hurt her in any way. He knows too well what it feels like to be an outsider.

But then he receives an offer. The Marquess of Bradenton, a power broker who was gravely humiliated by Jane, asks Oliver to engineer her downfall. In return, Bradenton promises to deliver nine votes, from himself and his friends in the House of Lords, in favor of voting reform, an issue near to Oliver’s heart.

Not only that, but if Oliver does so, Bradenton will also let him be the one who gets the credit for swaying Bradenton’s friends. This will lift Oliver’s political star high enough to eventually net him a seat in Parliament.

Oliver gets a sick feeling in his stomach at Bradenton’s suggestion, because while he would like to refuse, he can’t quite bring himself to do so. His conflict grows when he realizes that Jane’s act is just that—an intentional deception.

Oliver gets to know Jane, and she begins to trust him. When Oliver warns her against doing so, she decides not to listen. Oliver makes her feel less alone, and while Jane may be the “impossible girl” in Oliver’s eyes, he is equally drawn to her.

In addition to Oliver and Jane’s storyline, there are two subplots in the book. One is about Jane’s sister Emily, who sneaks out of the house against her oppressive guardian’s edict, and meets and falls in love with an Indian law student, Anjan Bhattacharya. The other has to do with Oliver’s younger sister Free, and her namesake, his agoraphobic aunt Freddy.

I thoroughly enjoyed The Heiress Effect but before I get into the reasons why, I wanted to mention the stumbling blocks I encountered. Most of these were relatively minor, hopped over easily, but there were several of them.

You have a way of crafting strong and original conflicts. Your plots put the hero and heroine at cross-purposes in unexpected ways, and that is one of the reasons I so appreciate your books. That was the case with this book as well as with the other works in this series.

Perhaps because I am familiar with your other works and you consistently write good guy heroes, though, I didn’t believe that Oliver would actually harm Jane in his quest for the votes Bradenton could deliver. I think the conflict would have felt even stronger if I had.

At the same time, I did believe in Oliver’s desire to fit in, and in the ways this hurt his relationship with Jane. But for this reason, I wanted a bigger grand gesture, sacrifice, or other balancing of the scales by Oliver at the end of the book. This is a redemption story, and the redemptive arc needed to be stronger.

Politics was somewhat idealized by the resolution of the story. The Heiress Effect began with Oliver having to choose between harming one person—Jane—and sacrificing the greater good (a win for democracy by expanding voting rights). But politics is a profession in which you have to be prepared to sacrifice individuals for the greater good, for example sending soldiers to die in wars. If you can’t bring yourself to do that, you may find yourself unable to stomach your profession. There’s no simple solution to this problem, so I wasn’t completely satisfied with the book’s conclusion on that front.

I also felt that the novel tried to dodge a bit of a bullet with Anjan’s character. I loved him and I really felt for him because of the way he had to hide some of who he was to be accepted in England. In this he had something in common with Oliver, but the novel never told us whether he gained the same freedom to be himself at the end that other characters find.

In discussing the book’s premise with Sunita, who has not read it, I learned that Anjan’s last name indicates that he belongs to a high caste (Brahmin). It is very unlikely that someone in his position would have married an English woman, especially in 1867, although it is possible. It is even less likely that such a marriage would have won approval from Anjan’s mother.

On a different topic, while the “to thine own self be true” theme is one of my favorite themes in literature, I feel the worthwhile message of The Heiress Effect is driven home a little more strongly than I prefer, with the result being that the novel feels a bit didactic.

To one degree or another, I’ve had this issue with every Milan book or novella I have read, and I’m not sure to whether it is because the strength of the messages can get in the way of the romanticism of the narrative, or whether it’s that the messages stand out more because they are feminist and progressive, which I like, but which isn’t typical of the genre. I suspect it’s some of both.

Now onto the things I enjoyed in this novel. There were quite a few of them, too.

I loved the way Jane, who wore bold clothing and made bold choices, was contrasted with Oliver, who tried so hard to fit in that he stifled who he was. I loved this conflict and especially the role reversal. [spoiler]While the story began with Oliver giving Jane courage, it ended with Oliver taking courage from Jane.[/spoiler]

I thought Jane was a truly heroic figure, and I loved her. She was true to herself and that can take a lot of strength. Oliver was less heroic, but I still liked him. I thought it was a nice bonus that neither of the protagonists was an aristocrat, that both were outsiders, and that two who were once scorned as “illegitimate” found their happiness together.

The sex was sexy and felt necessary to the story. I loved that there wasn’t any extra sex shoehorned in just to make the book more steamy. Instead we got exactly what served the story best.

Similarly, I was glad that though we got to visit with Robert and Minnie, Hugo and Serena, these scenes served Oliver’s growth and didn’t feel like prequel bait (I was a little less keen on Sebastian and Viola’s later scenes – those didn’t feel quite as organic).

One of the things I appreciated most was that The Heiress Effect included a world of characters: family members, friends, and colleagues of the main characters. It’s rare to see such a richly textured tapestry of a novel in this genre and I think the secondary characters contributed to that effect.

Among those side characters were two human and believable villains. Titus, Jane and Emily’s uncle, wasn’t purely evil. He believed he was doing the right thing by keeping Emily confined and allowing doctors to experiment on her in order to “cure” her.

The Marquess of Bradenton was even more believable and more compelling. He relied on his privilege to bring others into line and tried to use it to control Oliver. Bradenton truly believed himself superior to Oliver due to his birth, and putting upstarts like Oliver and Jane in their place was something he saw as natural, part of the social order.

It was such a nice twist that just as the hero wasn’t an aristocrat, his antagonist was one. Romances so often romanticize the upper classes that it feels refreshing and authentic to me to see an example of how power and privilege can corrupt and blind.

Anjan and Emily’s storyline had a subtle star-crossed lovers feel that was deeply romantic. I wondered how they would overcome Emily’s uncle, and the solution to the problem proved delightful.

Anjan was a wonderful character, chafing at bigotry and oppression but aware that rebelling could be costly to him. He was respectful of Emily, and caring and supportive once he learned the truth of her circumstances.

Oliver’s aptly named sixteen year old sister, Free (short for Frederica), was another terrific character. I loved her ambition and her inner strength, which was made up of part idealism and part determination. I am now looking forward to The Mistress Rebellion, the upcoming book that will feature her as a main character.

Finally, what can I say about Oliver’s agoraphobic aunt Freddy? This was the character who annoyed me in The Governess Affair with her constant disapproval of Serena, but in this book I discovered a lot more compassion for her than I’d had previously. She won my affection and respect, and she broke my heart.

While not perfect, The Heiress Effect was a very enjoyable book and a moving one, too. Even with the issues I’ve listed, it is still one of the best 2013 books I’ve read. My grade for it is a B+.