REVIEW: The Arsonist – A Mind on Fire by Chloe Hooper 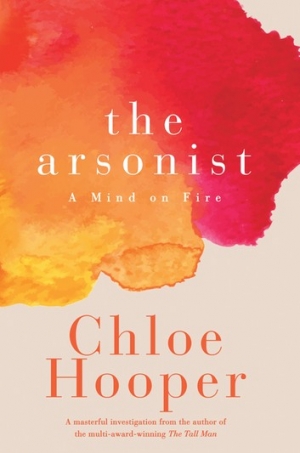 On Saturday 7 February 2009, more than 400 separates bushfires raged in the Australian state of Victoria. 173 people lost their lives, over 2,000 homes were destroyed, countless animals, livestock and wildlife died in the blazes. According to Wikipedia, the fires affected 78 towns and left more than 7,500 people homeless. Some towns were almost completely destroyed. Some fires were still burning two weeks later.

The Arsonist tells the story of one such blaze, in the LaTrobe Valley in the southeast of Victoria and the man convicted of deliberately lighting it.

Over a period of four years, you meticulously researched the book, interviewing victims and survivors, police and other first responders, the family and legal team of Brendan Sokaluk, the man ultimately convicted and jailed for arson causing death. 11 people died in the Churchill blaze (as this fire was known – named after the closest town) but Sokaluk was only charged with 10 counts as the 11th person died of a heart attack and there was some question in the minds of the prosecution whether they could make out the charge. Sokaluk is currently in jail, having been sentenced to nearly 18 years’ imprisonment.

I listened to the audiobook, narrated by Australian actress Sybilla Budd. The narration by Sybilla Budd was… fitting. Her Australian accent is essential to the story. However, some words were mispronounced (eg, casual” instead of “causal”) and the emphasis in a sentence wasn’t always where the text might indicate it should be, with odd pauses every now and then which tended to alter the meaning somewhat. It was the story itself which was compelling. The narration alone was about a C+ level but the content was something else.

The book begins in the hours and days after the fire, with the investigation by police, interspersed with accounts from survivors. It is harrowing listening.  A man tells of watching his spouse burn. A parent of a series of calls and text messages and then ominous silence. And more. There are some stories too of houses which miraculously remained unscathed, surrounded by blackened landscape and narrow escapes by firefighters as equipment and communications failed on the day.

There was a Royal Commission into Black Saturday. The Commission made wide-ranging findings; recommendations to improve how the fire service worked and communications methods to warn the public and detailing the failure of various infrastructure. The Arsonist touches on these things and shows the Churchill fire as part of a broader context but, for the most part, it narrows to tell but one slice of Black Saturday, in painstaking, sympathetic detail.

The LaTrobe valley is a depressed area, largely populated by people from some of the lower socioeconomic sections of society. There is high unemployment and reliance on social welfare. Domestic violence and child abuse is commonplace. It’s a place where some less than desirable neighbours live alongside the “Aussie battler” – all of them coping with the changes to their environment brought about by the country moving away from brown coal-fired electricity which is abundant in the valley. The power plant is closed now and unemployment remains high as the money flowing from the sale of the assets didn’t flow into their towns. It’s a place more rural but not dissimilar to the impoverished suburb where I grew up. There is a familiarity to the the environment which brings back memories of a fairly bleak outlook and general disaffection. Back in the day it produced in me a desire to get out and stay out. (I did.)

The first section of The Arsonist is about the investigation and the victims/survivors and leads up to the arrest of Brendan Sokaluk, a Churchill resident on a disability support pension as a result of a learning/intellectual disability.

The next section focuses on Sokaluk, how he grew up, who he was. During the course of the court case (which took three years to get to trial), he was also diagnosed with Autism. He was severely bullied as a child in the 1970s and was regarded as the town “weirdo”. Neurodiverse readers/listeners may struggle with the subject matter. Some of it is harrowing as well, albeit for different reasons.

You present him with sympathy while never excusing his actions. Sokaluk himself says that he believes he started the fire accidentally – by throwing a fast food napkin containing some ash from a cigarette which (he says) he believed was extinguished, out of the window of his car. The prosecution’s case (which was accepted by the jury) was that he started the fire deliberately. You certainly accept the jury’s verdict. Much of the book asks the question “why”. There are no answers really. Sokaluk continues to deny he committed arson after all.

But there are perhaps, reasons for how he came to be so very isolated.  Maybe that had something to do with what happened. He is presented as both a guileless victim and a cunning evildoer. There’s an argument he’s both. I don’t know the truth but ultimately I came out of the listen believing the entire thing was tragic on every level.

The trial, the challenges of preparing a defense for a man who prefers to watch Thomas the Tank Engine and other children’s TV and is not actively engaged in his own defense and the sympathies of his legal team are detailed. The victim impacts are a bookend – why ever Sokaluk did what he did, the result was a devastation and loss and pain on pain on pain. Somehow everyone is presented with some empathy. I thought you trod a fine line between presenting facts in a human way and fairly representing the people affected by the fire – Sokaluk included – without every approving of Sokaluk’s actions. It is mainly a story of grief and devastation – on so many levels and in so many ways.

It’s hard to say it was “good” when the subject matter is so dark. But the book was compelling listening notwithstanding some of the reservations I had about the narration.