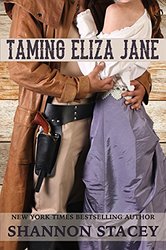 When a man sets out to tame a strong-willed woman, he’d best hang on to his hat.

Will Martinson, the town doctor, already has a heap of troubles on his plate, what with a pregnant whore, an ailing friend and a sheriff with a bad habit of shooting people. The last thing he needs is a strong hankering for a woman who thinks it’s her duty to turn a man’s life upside-down.

Eliza Jane Carter is a woman on a mission. She’s going to improve the lives of the women in Gardiner, Texas before moving on to the next town. But when her finances take a turn for the worse and her chaperone heads for the hills, Eliza Jane is stranded in a town full of riled up menfolk, a gun-happy sheriff and one handsome doctor who makes her question everything she ever believed about the love between a man and a woman.

I have enjoyed your contemporaries – some more than others – and heard good things about this historical series but I’ll be honest and admit that the title put me off. “Taming” just brings to mind humbling and breaking a strong willed woman in order for her to be more acceptable for her man. But I thought, let me try it and having finished it, I’m glad I did. Eliza Jane is a force to be reckoned with and Will Martinson loves her all the more for it.

Eliza Jane Carter’s reputation precedes her and the men of Gardiner, Texas are not one bit happy to see her step off the stage. She riles up the women which riles up the men and when that happens, Sheriff Adam Caldwell gets angry and threatens to shoot people. His best friend and deputy and also the town doctor, Will Martinson, knows he’s got to intervene and calm things down. He also tries to keep his wanton thoughts to himself about the beautiful Eliza Jane.

Eliza Jane is on a crusade – a mission – to try and improve the lives of women everywhere. Her arranged marriage was a disaster, her husband divorced her when she didn’t bear him a son and her money was left in a trust to be handled by another man. But still, she doesn’t think all men should be gelded or women shouldn’t get married. She just wants women to be informed about their bodies, their health and their rights. If the women decide to withhold marital rights which gets the men angry, well she never told them to do that. Will has about got things under control until the town whores also go on strike.

When a financial disaster strands Eliza Jane in town with no money, she’s got to face a bunch of angry people and now has time to get to know Will. The town madame, who Will loves almost as much as his mother, sees straight through the two of them tippy toeing around their feelings and gives Eliza Jane some pointed advice – to take what pleasure she wants from life and to hell with what any one else says.

Will is more than ready to help Eliza Jane scratch her itch but soon finds himself wanting more – which is crazy because he’s got a gorgeous and willing woman and no strings. But sneaking around doesn’t suit him while Eliza Jane is unwilling to commit to more, having once been under a man’s thumb. Can he persuade her that he won’t change his mind and that she’s who he really wants before she earns enough to take the next stage out of town?

It took me a little while to warm up to Will as he takes a lot of pleasure in getting Eliza Jane riled up. Since that causes him to think about her constantly which then affects other parts of his anatomy, I settled in to enjoy their interactions which weren’t all what I was expecting. Eliza Jane doesn’t stamp her feet – okay, maybe once – or get put into pratfall situations. She stands up for herself and does for herself and faces the music when she has to job hunt, all without expecting Will to step in. She drives him crazy at times but Will always respects Eliza Jane – he might not always agree with the outcomes of what she’s preaching but he doesn’t hold with violence against women and he respects her rights and opinions.

He tells her what makes him love her, he tries to reassure her but in the end, he lets her make up her own mind even if it’s to leave him.

The word husband made Eliza Jane’s heart ache for what could have been. “You said yourself I’m the opposite of everything a doctor’s wife needs to be.”
“But you’re not the opposite of what this doctor needs his wife to be.”
“You won’t be happy with me for long, Will. And I won’t change.”
“You’re not being fair to me. I’ve never tried to change you.”
“You said I was no end of trouble.”
“And that’s the truth. But I fell in love with you anyway. So it seems to me if I want a stubborn, wanton troublemaker as a wife, you shouldn’t be trying to talk me out of it.”

Will walked to the door, but paused and looked back at her. “I love you, Eliza Jane. Not the woman you think I want you to be, or the woman other folks say you should be. I love you.”

Meanwhile Eliza Jane discovers that she’s had more of a positive effect on the town than she thought and gets some more good advice from some of the “chickens” at the whorehouse. Right, so they all have hearts of gold but I enjoy Sadie and the girls. I do wonder how Will and Eliza Jane are going to live down her drunken announcement in the saloon but since he’s the only doc in town, I guess Gardiner, Texas will just have to get over it or maybe continue to gently rib Will every now and then. “Giddy up, Doc!” B+