REVIEW: Stir Me Up by Sabrina Elkins

Your editor emailed me and asked me to take a look at this book. I think it sat in my inbox for at least a week and she contacted me again. She loves this book and wanted it to get read. Now I love this book and want it to get read.  In fact, in the last podcast I recorded with Sarah from Smart Bitches, I threatened to not talk during the next podcast if she didn’t at least read Stir Me Up.  Sarah called me a book bully. 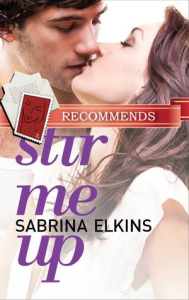 Cami Broussard grew up in her father’s kitchen and wants to be a chef someday but her father keeps pushing her toward college.  The chef’s life is not an easy one and he tries to explain to her all the negatives. She will have to work every holiday.  She won’t be home for dinner.  She will miss more family events that she will make. The restaurant will own her.

While Cami pretends to be interested in colleges, she and her current boyfriend (and employee at her father’s restaurant) dream of their restaurant owning future together. Cami’s last year of high school is interrupted by the arrival of her step cousin, Julian. Wounded while deployed, Julian comes to Cami’s home to recuperate.  He’s angry, sullen, and bad tempered and takes it out on everyone including Cami.  Worse, Cami’s abruptly ousted from her first floor bedroom to an attic alcove that doesn’t even have a door or a closet.  And what can she say? No, the war veteran should sleep in the floor in the living room? Things with her boyfriend take a turn when he continues to pressure her for sex which Cami isn’t quite ready for.

I couldn’t decide if this was a hamfisted way to clear a path for Julian but given that the breakup between Cami and Luke doesn’t quite happen in an expected way, I weighed in on the no side. Besides, I like it when the heroes of YA books are okay with waiting because that’s a message I’ll want my daughter to read. Just putting my bias out there.

The relationship between Cami and Julian is entirely believable as they go from antagonists to reluctant confidantes to something more.  Cooking plays a huge role in this book and I loved how evocative the writing was as it pertained to Cami’s love for food.  In the book, the creation of food becomes a metaphor and initially the only way that Cami reveals her feelings for Julian, perhaps at first even unconsciously.

Cami is a great heroine. She’s not hung up on her looks or getting the guy in this story; she’s trying to figure out her place in the world. Her thoughts aren’t filled with where the next party is or whether she is fitting in with the right crowd at high school. She’s busy trying to cope with her feelings for the wounded guy in her bedroom and deciphering what it means when he tells her to decide for herself what she wants out of life.

“No big deal,” he says. “For this one… ” He scrolls back up. “Just start with something like Ever since I was little, my father has owned his own French restaurant.”

He moves away from the computer and looks at me. “Ever since I was little…. ” I say.

“You’ll need to put it in your own words.”

“Okay. How about: I spent most of my childhood playing behind the stoves of my father’s French restaurant.”

This mildly impresses him. “Did you?”

“I loved it. All the action and noise.”

“Sure. The noises are great—the pots and pans and utensils and searing sizzling food, the chefs hollering and shouting at each other and the wait staff running around and the doors and the plates. It’s a concert.”

“You… maybe you should just be a chef.”

“Dad’s convinced I should get a degree first. So I don’t limit my options. Also because…” Julian’s kind of staring at me. “Because he never was able to go to college himself and he thinks it’s too hard a life.”

Oh God. Stupid pale complexion showing everything all the time. I cover my cheeks with my hands. They’re burning.

“Okay, well… let me know if you want me to read the new versions,” he says. And he wheels away.

Julian’s presentation as a Marine with a medical separation due to his amputated leg was sensitively handled.  Cami admits that on the one hand it bothers her because it represents a painful loss to Julian but on the other hand, the loss of his leg doesn’t define him in Cami’s eyes or anyone else’s eyes in the book.

One of the things that I think young adult books do so well is show how the characters actually fall in love. Cami’s movement from resentment toward curiosity and into desire is believable and sweet. There are love scenes but they are tactful and appropriate for the tone of the book.  Overall, there’s just a sense of loveliness and sweetness about the romance and Cami’s journey that I hope others pick this book up and read it. B+

PS I know I’ve talked up this book a lot but I feel like at $1.99 it’s a low risk proposition.

→ Jane
Previous article: The personal boycott and how it’s not censorship
Next Post: REVIEW: Fairies in My Fireplace by R.L. Naquin