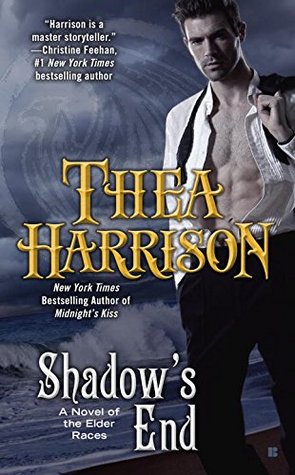 Graydon has been my favourite of the Sentinels ever since I read and loved Dragon Bound so I was very excited to finally read his book (even if the cover model, pretty as he is, looks nothing like him). I was happy to see Graydon get his HEA at last but there were a couple of things that didn’t quite gel for me. Nevertheless I did enjoy the novel and recommend it to fans of the series. Those who have not read the previous books will likely be very lost, particularly as the conflict here builds on events in earlier stories, particularly Lord’s Fall (regarding the Elves), Night’s Honor and Midnight’s Kiss (regarding the pariah djinn, Malphas).  **Note: some series spoilers follow.**

Graydon has the second sight. Unfortunately, it is not usually very helpful to him as it shows one possible future but never with enough detail for him to definitively know what is going to happen or to change it. He has made it a policy to do what he needs to do regardless. After all, it is just as likely that him changing his course as a result of a vision will bring the foreseen future about as him not changing his course. He has long decided not to be a slave to it. For 200 years he has had a particular vision of his death. He is on a snow covered shore, with a black building of some description in the background, black waves pounding the beach and red heart’s blood flowing from his body and dripping onto his clenched fist. He senses the time is fast approaching when the vision will come to pass.  He has always believed:

If he was strong enough, smart enough, if he fought hard enough and tried long enough, he could win through.

He reminds Dragos of a long ago request for a leave of absence, no questions asked, a request Dragos, sensing trouble for his First, reluctantly grants. Then Graydon heads towards the Elven demesne in South Carolina (if I was writing a blurb it would now be a good time to say – dramatically – and his destiny…  – note the ellipses, they are important for blurbs.  But I digress).

As Graydon flies, he remembers the events of 200 years ago which have led him to today; the time he first had the vision of his death. (Spoiler alert: this is a romance, of course he doesn’t die. That’s not to say there isn’t some moving tragedy in this book – there is, but romance lovers are safe. I promise.)

It is December 1815 and the Elder Races are celebrating the Winter Solstice at their annual masque in Vauxhall Gardens. Beluviel, the Lady of the Elven demesne is in attendance, as is her estranged husband, Calondir. They arrived separately and will leave separately as always, not interacting in between. Beluviel is waiting for her stepson, Ferion. It is for him that she remains married to Calondir; they long ago agreed to stay married only for Ferion.  (I mention all this because when Graydon and Bel are first intimate, technically it is adultery. This may be a dealbreaker for some readers, but I was able to go with it because of the long-lived nature of the elves and because of the “agreement” between Calondir and Bel. Effectively it is an open marriage but Calondir requires discretion while using none himself. However, by 2015, when the present day section of the book is set, Calondir is dead and there is no impediment for the pair from him any longer in any sense.)

Ferion is late and as time passes, it becomes clear he will not attend. Ferion has a gambling addiction and despite a promise to Bel he would quit, it is clear he has not done so.

Graydon has always had a little crush on Bel. She is beautiful and vibrant and all the good things he could ever hope to admire in a woman. As his fellow Sentinel, Constantine, says however, she is the very definition of unattainable. She is married and she is an elf. Elves are not too fond of Dragos because a very long time ago he preyed upon them for food. While Dragos is not like that now, it is difficult for the elves to forget what he had been and this is true for Bel in particular. Graydon’s place is with Dragos in New York; Bel’s place is with the elves in South Carolina. What future could there even be if they could get over the fact she is married and she hates (with reason) his friend and boss?  Still, Graydon can sense Bel is troubled and offers aid. Despite the vision of his death and despite that they can’t be anything to one another, he cannot stand by and do nothing while she is in distress.

Beluviel’s beauty was the first thing anybody seemed to notice. Graydon thought it was the least important thing about her.

Bel is not a damsel in distress in the typical sense. She is capable and strong and gifted in her own right. In fact, she makes it very clear to Graydon that she can manage on her own. Still, because he can help and his help will speed matters, she accepts.  Bel has not had the esteem and affection of anyone in the romantic sense for a very long time. In Graydon’s company, she finds a part of herself which long ago went cold, warming and awakening.

They eventually find Ferion, deep in the clutches of the pariah djinn, Malphas. In order to protect Ferion, Bel and Graydon make a bargain of their own with the djinn.  It is here where one of those things which didn’t gel for me happened. I couldn’t really see what was in it for Malphas. I didn’t understand why he made the bargain with Graydon and Bel. I was hoping to find out more but it never eventuated. Readers kind of have to take it on faith that it makes sense. And, it is something the entire story hinges on so it is not unimportant.

The novel then picks up in the present day. At long last, Graydon has evidence against Malphas which does not break the bargain he made 200 years earlier and it is time for the final push to kill Malphas once and for all.

The story itself takes place over less than a day in 1815 and only a few days in 2015. I was able to buy into the love story of Bel and Graydon but there is a bit of the instalove about it. Too, because of the timeline and structure of the book, the love scenes are mostly crowded into the end, which had the effect of making them seem a bit too frequent. In reality there weren’t any more than usual but they come very close together (heh) in terms of book pages here so it feels like a lot.

There was a thing near the end which I was really curious about. I’m the girl who wants to know what’s in the damn suitcase (that’s a Ronin/Pulp Fiction reference by the way) and so when a character says they’re going to do something and then it doesn’t happen, I want to know what it was. I’m being a little vague because I don’t want to spoil the end of the story but it is the “suitcase” of Shadow’s End for me. In some ways, the finale was a little anti-climactic but I was nevertheless very moved by the aftermath (there *might* have been tissues required. Ahem).

Because Graydon’s story started about 198 years before the events of Dragon Bound, I am a little curious now to go back and see if I can glean any hints of Graydon pining for Bel in earlier books. My memory of him in the first book was of a very laid back guy who didn’t seem to have a care in the world.  (I’ll probably never find the time to actually do it though.)

I don’t think Shadow’s End is the strongest book of the series. Looking at it critically, it was perhaps a little light on (it also seemed shorter than earlier books) and I did have a niggle or two about the motivations of certain characters, but I enjoyed it nonetheless. I like visiting the world of the Elder Races and, as I said at the beginning, I am a huge fan of Graydon. I liked the romantic resolution and it made sense to me in all the circumstances that it would be so. I think fans of the series will enjoy this one.